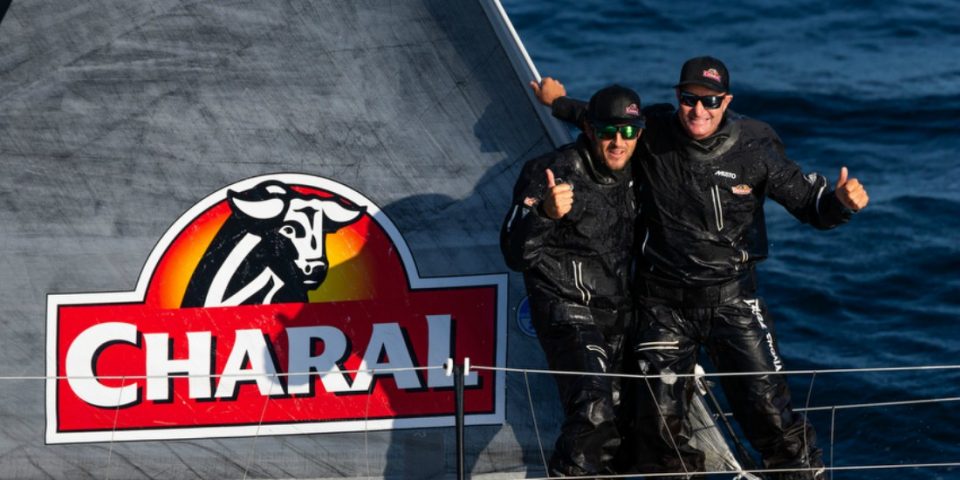 Now at just on one year after the launching of Charal, the first of the new-generation IMOCA to be built, in early August Jérémie Beyou won the Fastnet Race sailing with Christopher Pratt. This was his first win on the VPLP design. So, now at a little more than a month and a half before the start of the Transat Jacques Vabre, the pinnacle event of the season, we meet up and take stock of  past and future developments of  his 60 footer, we talk about the newer boats and the development of his company BeYou Racing.

Charal was launched a year ago, has it changed a lot since then?
No, not really a lot, except for a few small details such as fittings and ergonomics. On the other hand, in terms of our ability to push the boat hard and to sail at the theoretical numbers predicted for all wind speeds, it has changed enormously. Now, today, we have almost no fear about its reliability, we don’t need to hold back and we do know our target numbers, the sensations and where the boat’s limits are. We have really found best ways to sail fast. But now we have to keep working because we see these new boats launching and we know we still have a lot of room for improvement in certain areas. Anyway nobody will be better allround, no matter what these boats are still a compromise. It is difficult, if not impossible, to have an IMOCA that goes very fast upwind, goes well in the light, downwind, reaching, in of the flat or in bigger seas. We say that the five-legged sheep does not exist.

So in real terms what are the strengths and weaknesses of Charal?
The transom is low in the water so until we accelerate to speeds of around 8-10 knots, it drags in the water. The hull is optimized for higher speeds. And I suppose we have very large foils which are  thick, so at very low speeds, there is a fair bit of drag. On the other hand, this hull and these foils allow us to take off and fly very early. That is the really big quality of the boat: from 12-13 knots of wind we are on the foils and so effectively that speed range from 13-14 knots to 17 knots does not exist, immediately your are up to 17 knots. And that’s our real asset on a course like the Vendée Globe, especially close reaching in mid teen winds when you are coming into and getting out of the Doldrums. I consider that one of our prime assets. And it is a boat capable of flying at almost 100%, especially because we have a long enough (foil) shaft. Some seem to have shorter shafts, they feel that flying high is not interesting or not possible. But we think the opposite. It’s a balancing act at times, it can be stressful, because when you slow down hard you slam down from a higher ride height. So we have a boat that has great qualities in medium winds, which reaches very fast, which goes well downwind and does well upwind. At very high speeds, say over 30 knots, our advantage levels a bit because we pay a bit for the (big) size of our foils and the drag, but on a Vendée Globe last time it was all about 16 knots of “boat speed” the last time, this time it will be about 17-18 knot averages, not 30, so these really are the speed ranges we try to find more of the time.

Talk to us about the new boats, what do you think of Apivia, which you sailed with lately in training?
The first thing to note is how quickly they are up, sorted and in working order. Clearly they did a great job in production and design. Compared with them we fly higher and we can fly the boat fully while he still has the transom in the water, which an effect of the foils. We also seem to have quite different sail shapes, ours are flatter. I don’t know if that’s a version 1.0 or that is their design choice. Overall they seem good in the light to medium stuff maybe because of the deeper sails; downwind we seem to be the same and reaching we are a bit better. But hey, that’s is just sailing at Port-la-Forêt, you really have to keep everything in perspective.

And the others, Arkéa Paprec and Hugo Boss?
Arkéa is very different from Charal. In terms of the hull, theirs is very flat and requires the boat to be heeled over to come out of the water. As for the shape of the (foil) shaft, straight or curved as on Arkea, there are big differences, the boats won’t be sailing with the same depth of foil or the same angle of heel. Who has got it right? It’s hard to say. As for Alex (Thomson), we have not seen him sailing, we checked him on AIS from time to time in the Solent, you can see some nice speed spikes, but we don’t account for the tidal currents whether he had 5 knots of current with him or against! What is certain is that this is a boat which is even more radical than ours: the transom seems more extreme and it seems to have been further developed in the shape and the surface of the foils. But will he have enough versatility? I just don’t know. We will see him on the Transat Jacques Vabre, but not before.

Given your lead in terms of the optimisation time you’ve had with your boat compared to the competition, can we say that you and Christopher the favourites on this Transat Jacques Vabre?
What a question ! (Laughter). It is clear that we want to be ahead of everyone at this stage and victory in the Fastnet has set us up with a good dynamic, so yes, I hope we can deliver the win. But we certainly do not see ourselves crushing the competition, because there are really good boats that have just been launched. And there are the others that have been upgraded such as Initiatives-Cœur and PRB. But, in saying all that we have very clearly identified areas for improvements to Charal. And we have a development programme for next winter including a new pair of foils and other modifications.

These were planned from the beginning?
Yes, we even imagined doing two foil versions before the Vendée as well as the initial pair, but manufacturing delays will not allow us to do so. So we will might go on and have a more refined pair than this V2 pair after the Vendée Globe. We have delayed the deadline as late as possible before going with our V2 to see what the others had done. That gave us a bit of time to simulate some foils, like those of Initiatives-Coeur, for example. So we have had the time to really carefully define this second version and they will be much better than the first [designed with VPLP and built at C3 Technologies for delivery in February to go sailing in March, Ed].

How will they be different?
I cannot tell you! But today, the general trend is to finer foils, more “sabre” shaped than ours.

Now let’s talk about your team which has seen some changes this year, especially at the head of BeYou Racing (Vincent Beyou replaced Sylvain Hay): was there a need for changes or is this dictated by the circumstances?
A combination. We have worked with Sylvain for several years and it was all going very well, but he wanted to do different things. So we have fresh blood, family, my cousin Vincent has come in to replace him. Vincent is very familiar with motorsport and the motor industry and being a concession manager. So he comes with business rigor, his processes are from a SME, a way of working with big accounts which you can develop with our sponsor Charal, but he also has his ideas about the development of BeYou Racing. And we have the arrival of Ewen Le Clech as boat-captain who did us a lot of good.

So with BeYou Racing what would the turnover be?
I will not disclose it because that is essentially the Charal budget. But let’s say it is the budget to run an ambitious IMOCA project which employs about fifteen people. I think you’ll have a very good idea of ​​what that would be!

Bertrand Pacé also joined you as an external consultant, what’s his contribution?
He has become indispensable. When I think about it it’s a bit mind blowing…..how can such a small team such as ours have Bertrand Pacé on board? We do really enjoy every day with him, he is a hyper-pragmatic person who has a lot of common sense. He has sailed in top teams numbering a hundred people, but he quickly understands the constraints of a team like ours. He manages to rationalize things, to plan and organize our training sessions and to remember the fundamentals: how to set sails, to watch the twist, the clouds, starting, managing the first hours of the race. And he is very involved with Nicolas Andrieu (a member of the design office) on the evolution of the sail programme with North Sails. He is extremely choosy and what is great is that he says everything he thinks we need to hear. We make a lot of progress accordingly.

You talked about BeYou Racing developments, what might they be?
Right now we are fully focused on my Vendée Globe, but we have recently completed all the follow-up work on the construction of DMG Mori, the sistership of Charal (Kojiro Shiraishi’s new boat). We also took care of the setting up of the systems, the general engineering and the interface with the designers. Beyond that we look at what is happening with The Ocean Race. We are always open to collaborate with teams that would take in the race either in sports or technical development terms. MerConcept [the team of François Gabart, Ed] in this area is quite interesting. I think their approach, running several projects, such as a The Ocean Race project [11th Hour Racing] and Charlie Dalin, is the right one. There is really a big technical crossover and the added value of similar sporting projects, such as running and sailing two boats together is obvious. These are  areas of development that we would like to get in to, either on a design / construction management basis or in modifying existing IMOCAs. We have had and continue to have contact with certain teams, but there is no project forthcoming right now.

Could Charal be modified into a crewed version?
No, for now, it’s not part of our plans to modify this boat tor The Ocean Race. The programme is Vendée Globe, Transat Jacques Vabre 2021 and Route du Rhum 2022. But beyond that we are  watching what is going on elsewhere, on The Ocean Race and with the Ultim, we keep an open mind.