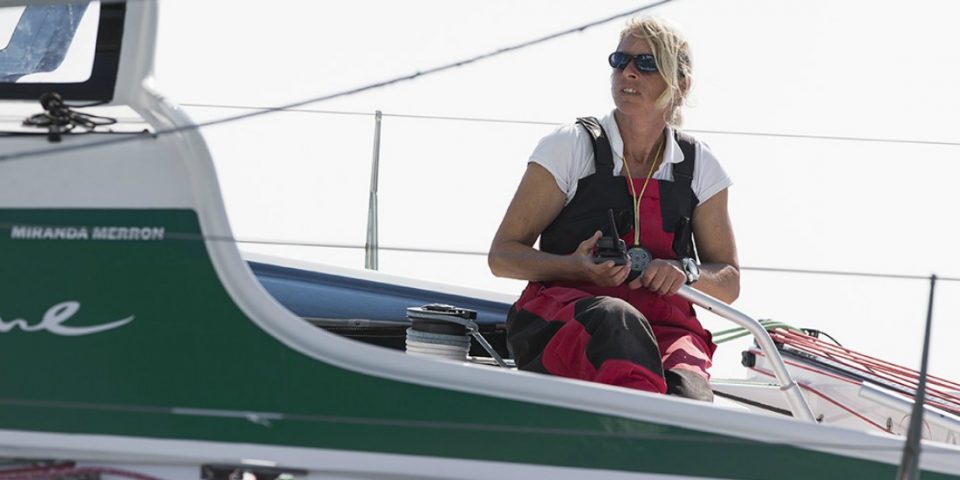 Miranda Merron: “The Vendée Globe will be the greatest challenge of my life”

After more than ten years competing in Class40, French based English skipper Miranda Merron took the plunge this spring and established a Vendée Globe project. She has the Owen-Clarke designed IMOCA which started life as Dominique Wavre’s Mirabaud and raced the last Vendée Globe as Great American IV Rich Wilson. The boat is renamed Campagne de France after her long time sponsors, a large French dairy products cooperative. Now Merron is preparing for her first solo IMOCA race on her new boat, Bermudes 1000 Race which starts on May 8th. The 2000 nautical miles solo race is the opener  for this year’s Imoca Globe Series The 49-year-old Briton, who works closely with her partner Halvard Mabire, who joins the discussion. She tells Tip & Shaft the reasons for her new life pinnacle challenge and discusses her objectives on what will be her first solo race around the world.

As you are very much French based and have been for so long, refresh our memories about your early ocean racing career?
I sailed a lot in dinghies when I was young, all over the world. We mostly lived abroad with my parents, especially in Japan. Then when I came to university to study languages ​​in Cambridge I thought I would join the sailing club to meet like minded friends – I met Ian Walker there, he was  was the same year as me. I was captain of the women’s sailing team for my last three years and we won the national championship. Then, I worked in advertising for four years, in Japan, Australia and Paris. I decided to stop. I went looking for work in sailing, literally at times by walking the pontoons. But I got myself on some good boats. After a couple of years I found myself on Royal & SunAlliance with Tracy Edwards for the Jules Verne Trophy attempt. You will maybe remember we dismasted two-thirds of the way round. We were ahead of Olivier de Kersauson’s reference time. That was when I met Sam Davies and Emma Richards. I raced the Transat Jacques Vabre in 1999 with Emma on Pindar. That really was the moment that I discovered solo and shorthanded offshore racing in France. It is a world which I had vaguely followed from a distance. But I never thought I would take to it as much as I have done.

After that?
Two years later I was on the Transat Jacques Vabre on the former Bagages Superior with Frédérique Brulé, followed by the 2002 Route du Rhum, my first solo race [8th in Imoca, Ed]. That was magical arrive alone on the other side of the Atlantic. The same year I raced several stages of the Volvo Ocean Race, I then got back to the Imoca with Mike Golding, Samantha Davies, Dee Caffari, and in 2007, I found myself in Class40 with an English owner. That really was the beginnings of the class. It has been twelve good years, including some very nice races, including the Route du Rhum 2014 which remains a great memory, I finished 6th. I tell myself that I have a lot of luck to make a career from sailing like this.

After those twelve years in the Class40, why move up now to the Imoca and a Vendée Globe project? Why the change?
Halvard and I have been with Campagne de France for a long time and as we signed for two more years, I thought that I wanted to finish up the partnership with something big. At first, I told Halvard that I was going to try the solo round the world record in Class40. He told me that it was better to do it in a race. And so that is why we started the talk about the Vendée Globe .

When you mentioned the Vendée Globe to Campagne de France, did they agree straight away?
They are obviously delighted, but I prefer to spend Halvard to talk about that part.
Halvard Mabire then takes over: They are very happy after the Route du Rhum which had a very solid media coverage but it is difficult to engage sponsors on races with less impact. A partner like Campagne de France does not always have the means to value its participation in races. So it is better if we stick with events that have good interest and communication. They are even happier that we are still on our Class40 budget. In fact this project is a reward for their loyalty to us since 2011. But now we have to find solutions to increase this budget in order to really do it justice, to get some new sails and to communicate properly. So now we are looking for complementary partners who have synergies with with Campagne de France. The idea is not to share the naming of the boat. For the moment we are not there with a full budget, we hope to bring some sponsors with us on the journey, and neither are we starting from scratch: we already have a budget to launch the project and the boat that has been financed by a group of investors. Our participation in the Vendée Globe is assured.

Miranda, has the Vendée Globe always been a project in your mind, a goal?
I almost participated before. I had a good part of a budget to race in 2004 on the old Hexagon. But for various reasons it did not happen. After that, I did not really think about it for a while, because it was becoming expensive. I was really having fun with Class40, which is a great class. But it came back to light during the discussions with Halvard when we were looking for a project to reward the support of Campaign of France. But is is a long time since I dreamed about it, it’s a magical race. In particular I remember the finish of Roland Jourdain when he was third in 2001. With Emma Richards, we were at the finish. It was an extraordinary sight to see his boat rise from the horizon after completing his solo round the world race. The Vendée Globe is likely not at all pleasant at times, but it is an extraordinary adventure and a very big personal challenge. Some may take this on like a bay race, a short offshore, but for me this is the biggest challenge of my life.

Few women have completed the Vendée Globe, but a good proportion are Britons: Ellen MacArthur, Sam Davies, Dee Caffari, how do you explain that?

(Laughter). It’s great, and now we also have Pip (Hare) who is doing the next one too. I think you are very lucky in France, because there is no barrier in the sailing world for women. There are many more barriers in other countries. This is probably why women, especially English women, come on the French races. And of course the major offshore races, apart from The Transat, happen in France.

Why did you choose the Rich’s former Great American IV (Owen-Clarke design launched in 2006 for Dominique Wavre) and how will it evolve?
To start with it was available. It is a good, solid boat very well built and quite simple, especially to make it round. There are no outriggers or foils. I don’t really feel out of place, it looks like a big Class40, which is still a big advantage because the season starts very quickly with the Bermudes 1000 Race. Thereafter, no, it will not change much, we will make some improvements. But no foils! The goal is first to qualify.

Qualifying is obviously the first step. Are you worried about getting a place on the start line as to date there are many more applicants than places?
It is clear that I won’t get there automatically, but I do not think about that too much. I have a lot of things to do and to learn. I prefer to devote my energies elsewhere than to worry about qualification. Right now I’m going to do the Imoca races this year, the solo Bermudes 1000 Race  in few days, the Rolex Fastnet and Transat Jacques Vabre with Halvard. If I finish them I should be on track.

You say that you have a lot to learn, what are the big differences when you move from a Class40 up to an Imoca?
I have already done a lot of Imoca sailing, so I should be fine, but there are more systems and it is all more complex on a 60 footer. These are the the biggest difference. And everything is obviously bigger and heavier than on a Class40. So, physically, it’s a step up.

What do you see as your goal on the Vendée Globe?
I’m going to wait til I have one or two races under my belt before I set goals. I’m only just back in the class so to start with I must learn the boat. Right now it is mostly working on the boat rather than sailing, it all takes time.