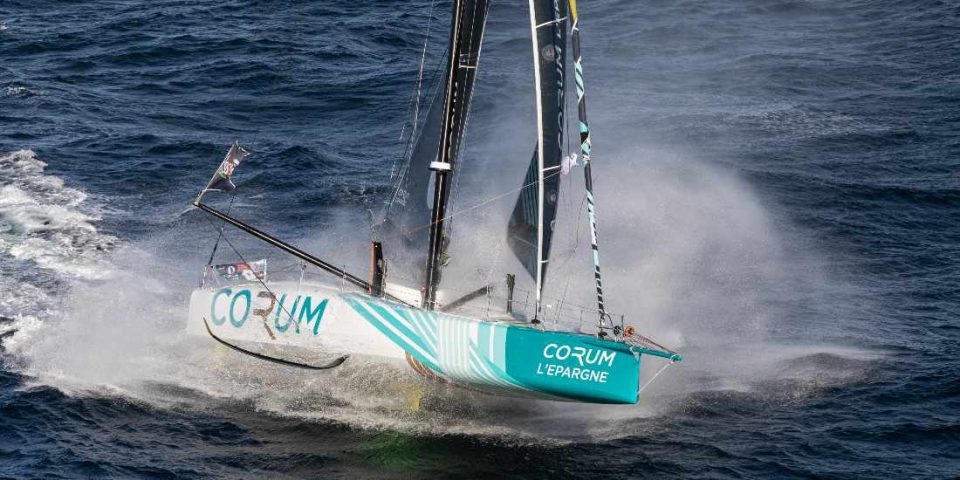 Nicolas Troussel: “I would like to make Corum L’Épargne work no matter what”

Forced to retire from the 2020 Vendée Globe because of the dismasting of Corum L’Épargne, Nicolas Troussel relaunches his Imoca at the end of next week, three weeks before the start of The Ocean Race Europe on which he will compete with Sébastien Josse, Benjamin Schwartz and Marie Riou. Tip & Shaft spoke with the sailor from Plougasnou.

What did you learn from your first Vendée Globe campaign?
Well it was very intense we still managed to make an optimum preparation even if our time scales were short and compress, but even at that it is hard to say that because, unfortunately, the Vendée Globe ended very quickly. As for the race itself I feel like I haven’t really been through the same experience as the others, it feels almost like I did not participate in the same things, and that I missed out big time. Added to that is the fact that there was no normal build up with the usual crowds in Les Sables d’Olonne. It was hard to experience emotionally, it was not a “real” start to the Vendée Globe. Now I feel the page is almost turned I can’t wait to relaunch things to really move on.

Do you know exactly what caused the dismasting?
We know that the mast turned more than expected, the logical reason would be that there was a problem with the leeward lower shroud, but we are not sure, we will never know exactly. Since then, our emphasis has been on the whole alarm and monitoring aspect of the mast, which we had really put aside until then. We had actually pushed the boat quite a bit before the Vendée Globe without the slightest warning sign of any problem, but maybe I might have been able to detect something a little earlier if we had had different alarms for it.

What lessons have you been able to draw in terms of the pure performance of your boat?
The Vendée was my first real confrontation up against other Imocas, I didn’t have the impression of having been slow at any point nor did I have the impression of having been much faster than the others. But as it was all a bit short now I can’t wait to go racing around Europe. I think I will know a bit more by the end of the race on the boat. Right now we have typical foils to go fast from upwind to reaching but for VMG downwind we will have to see where we are compared to the others, because I have the impression that everyone has problems on this point of sail.

“A new pair of foils in September”

And what conclusions have you drawn in general about the performance of the new boats?
We are convinced that the new foilers will improve and evolve to become more and more versatile, even if this has maybe not shown to be the case and boats with small foils or daggerboards to do so well. The weather played an important role as did some key breakages, consider if Hugo Boss had not broken and for example if Charlie Dalin had managed to pass the Saint Helen anticyclone we wouldn’t necessarily be sitting here drawing these same conclusions. Today, we really are all still a long way from having optimal foil shapes and to evolve and optimise it would be necessary to be able to change them several times a year. Since we can’t, it takes time, but I think they will still improve in future designs and that we will be able to find the right balance to have higher average speeds in all conditions.

Can you tell us about what you have done to Corum L’Épargne during the work that is nearing completion?
We reinforced the bottom of the hull in the back half of the boat, we turned it over to change the foam and redo the outer skin gaining a little weight in this area. We also modified the angles of the foils a little, we re-did the surfaces of the foils. And we will have a new pair of foils in September which will be a little different. That is something we had planned for last year, especially to have a spare pair in case of breakage, but also to perform better in conditions where you are less able to push the boat. We do not yet know which of the two sets we will start on the Transat Jacques Vabre.

“Seb Josse is an efficient and easy solution”

On the Jacques Vabre you will race with Sébastien Josse who you sailed with on the last edition, he is a logical choice?
Yes we went really well on the water and on Corum. We have known each other for a long time, since way back when we made our Figaro debut almost at the same time. We get along well, we are on the same wavelength on a lot of points, he is an efficient and easy solution. Sébastien gives me a lot of control and confidence and that goes beyond just the sailing, he knows all the aspects of such a project, that’s why he is completely integrated in all the choices we make, both from a team and a technical point of view.

You have chosen Benjamin Schwartz and Marie Riou to accompany you on The Ocean Race Europe, why them?
Benjamin, I already wanted to work with him last year, it didn’t happen because he was on other projects. Here he is available, he’s someone very serious, athletic, he showed well on La Solitaire that he had qualities in solo [first rookie of the 2019 edition, Editor’s note], and that is important because we sail with only four on board. He is strong also has on the performance and electronic analysis side which is interesting, he ticked a lot of boxes. As for Marie we have gone with the woman who seemed to us the best, knowing that unfortunately there are not very many women yet. We both did a bit of Figaro sailing last winter, it gave me a lot of confidence in her I’m very happy that she is joining us.

Have you made specific arrangements how you will sail with four people on The Ocean Race Europe? And how are you going to organize yourself?
Above all we have thought about how to manage the space so that one or two can sleep at the same time, to cook. Life on these boats is really complicated both in the cockpit, because there is no real places to sit or a standby station, and inside there is not much space. As for the roles on board and the watches, we have already planned everything, we have made maneuver playbooks, but I can’t tell you more.

“I think everyone very much wants to continue”

How do you see the level with five Imocas?
I think we’re going to have a blast there are four boats at roughly the same level [Corum, LinkedOut, Bureau Vallée – ex L’Occitane – and 11th Hour Racing] and one which is a little older [Offshore Team Germany, the former Acciona]. This Tour of Europe is going to be super interesting and will allow us to set our goals for the Transat Jacques Vabre, which is really the main goal of the season.

And for you the goal is to roll into the new Vendée Globe campaign?
For now, we are with Corum until the Route du Rhum 2022 but the other goal of this year is to keep it all going beyond that, I think everyone is very keen on that. So, now we haven’t proven much yet, other than showing that we are capable of setting up such a project. So the goals are first to finish the races and perform well.

Jérémie Beyou has just announced the build of a new boat, others will follow, is that also a goal for you?
Not at all, I really don’t have that as a goal at all. I think it’s a bit early. Maybe I’m wrong, but I would like to get this boat to work no matter what. Here we are making new foils, we are lucky to have the means, the options to optimize a lot of things, perhaps in the project, we will have to modify the bow or the back of the boat, but for now, all that matters to me is that Corum L’Épargne works and is well placed in the races that we are going to compete in.