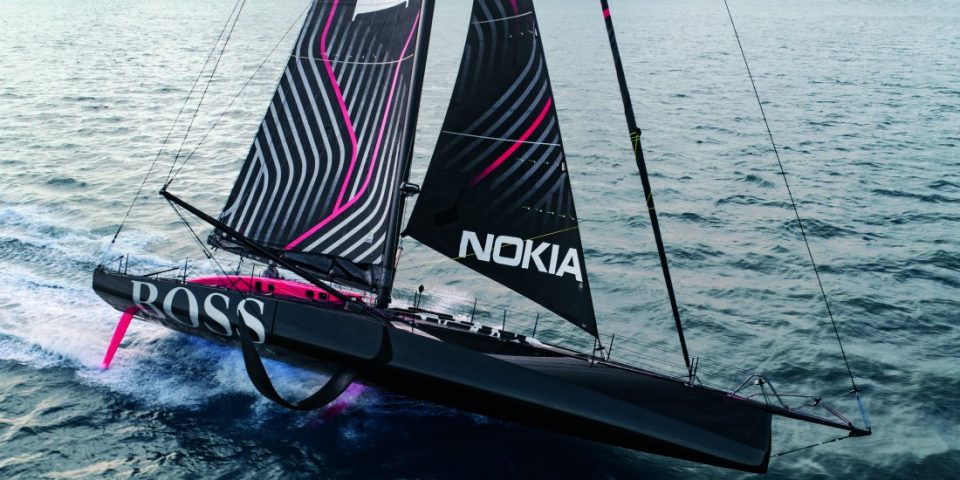 Quentin Lucet: “On Hugo Boss, we focused on hydrodynamic drag”

The new Hugo Boss that everyone was so keen to see was launched in early August in Gosport before being officially presented and christened in London last Thursday. It was an opportunity for Tip & Shaft to talk to Quentin Lucet, who is in charge of the project at VPLP. For this interview, he was accompanied by Vincent Lauriot-Prévost.

How were you chosen by Alex Thomson’s team?
Quentin Lucet: We had already developed a relationship based on trust with them, as we worked on their previous boat, Hugo Boss 6 [with Guillaume Verdier, editor’s note]. Then, the context was that Guillaume was working on the Super Sixty [the 60-foot one-design project for the Volvo Ocean Race, editor’s note]. Alex started talking about this project, but it wasn’t really what he had in mind, as he wanted to start out from a blank sheet. We had  lot of discussions with Alex’s team, in particular concerning the time we had available, remembering that the goal was to get the boat in the water for the 2019 Transat Jacques Vabre. In all, we were able to benefit from more than six months of studies around the project before sending out the shapes, as opposed to three or four in general.

What were the demands?
Vincent Lauriot-Prévost: They were simple: the Vendée Globe and nothing else! When we asked him if we should include the ingredients so that the boat could be used in other races and the reply was “No, not at all.”

What did you deduce from that in terms of the general outline?
Quentin Lucet: Our overall philosophy was to work to reduce the drag to a minimum on the boat, focusing on the hydrodynamics and the foils, as we are relying on their power to sail the boat in the points of sail usually found in the Vendée Globe.

Can you give us some more detail about that?
Quentin Lucet: It involves work on several levels. Firstly, the optimisation of the mass, which we really insisted upon and the centre of gravity, which corresponded to Alex’s request to have a cockpit a long way forward. We came up with the geometry, in particular the shape of the deck line, with volume spread around the centre of the hull, which really meant gains in terms of the mass. That means we could come up with the boat that has the lowest floor to the cockpit in the whole fleet. The second matter was about the aerodynamics, with a lot of design work around the coach roof, both concerning the forward section and the back around the mainsheet traveller. We carried out windage tests using an IMOCA, which showed just how much the traveller acted as  a brake. Consequently, we no longer have a coach roof and then a protective cover over the cockpit, but with a coach roof that stretches from the foot of the mast to the transom. That adds to the protection of the skipper with the cockpit entirely closed off.

Was this closed cockpit the result of these thoughts or something requested by Alex Thomson ?
Quentin Lucet: It was more or less him that came up with that idea. Setting up such a cockpit is completely linked to the sailor who is going to be aboard: does he feel at ease or not with that option? He moved us in that direction.

In practical terms, how does Alex sail the boat with this closed cockpit?
Quentin Lucet: Everything is centralised, and so he doesn’t need to go outside or to expose himself to the elements to ease the sail or see what the sails are doing. There is everything he needs in terms of openings to allow him to have a view ahead, behind and see the sails, so you could say it’s a sunroof. On top of that, he has installed cameras to allow him to see 360° around the boat. The other advantage is that means he will avoid filling the cockpit, the hollows in the deck and the lines with 400 litres of water: the gains in dynamic mass are huge.

Let’s talk about the hull. What are its characteristics?
Quentin Lucet: The most striking thing I think is the transom that is fairly well rounded with a chine that is not very big. The advantage is that when the boat starts to lift up, very quickly, the wetted surface is reduced, which doesn’t happen so easily with flatter hulls. Then, in terms of the flow of water, we tried to keep the lines as straight as possible, with a bow which has a big nose, which means that once the boat heels over, you reduce still further the drag from the hull.

Can you tell us the weight of the boat?
Quentin Lucet: It’s not up to us to answer that question [7,6 tons, told the press release], but we are close to a mass that is similar to the lightest boats from the last generation, but with much bigger foils [the pair of foils is said to weigh in at 500 kilos].

What are the characteristics of Hugo Boss foils?
Quentin Lucet: We have focused on an early liftoff, because we feel that their biggest asset is getting the boat up and flying and it is not necessarily speeds in 25 knots of wind that will make the difference. The second fairly important concept is that of self-regulation of the foil, because this “two-legged amimal” is not flying very stable on a bumpy, uneven sea so we try to work on the fact that these disturbances caused by the seas and the wind influence to a certain extent the shape of the foils.
Vincent Lauriot-Prévost: Obviously then it’s not about making a shaft, an elbow and a tip – sorry for Tip & Shaft! – but it is a curved shape coming out of the hull where the shaft, the elbow and the tip are all one. The idea is that these variations can generate a certain continuity of flow because the entry and exit angles change accordingly.

So the boat gets up from what speed?
Quentin Lucet: It depends on speeds but I think that at10 knots, it is still quite neutral, the foil pays back for the drag it generates, then, from 12 knots, the boat starts to rise. What is interesting is that these foils are completely retractable, it means that if we do not need them at speeds where the drag is more than the lift created then we can retract them.

What are the big differences between Hugo Boss and Charal?
Quentin Lucet: First, the foils are different, because the specifications of the skippers were different, that is to say their choices based on their research and how specific or verstatile they wanted them to be: Alex does not consider that upwind sailing is very important in order to win the Vendée Globe where for Jérémie, it is a little more important. Beyond that the cockpit and deck plan, which we talked about, are different. I also think that we had a long careful look with Alex’s team on many aspects of the structural design. We took the time to do full iterations on small structural options, they gave us the time and opportunity to study them. Whenever there was a possible gain of ten or fifteen kilograms that still fulfilled the required ergonomic considerations, we went for it.

And what are the differences with other Imoca launched this summer?
Vincent Lauriot-Prévost: We did not look for the same thing. We drew a hull that optimizes the hydrodynamic drag, the others worked on creating more powerful hulls maybe without the help of the foil. We did not agree to take drag so we could gain power, like what we did before with small foils. I think we made a few less concessions, our projects are a little more radical. If one day we were forced to sail without foils, we would be more penalized than them.
Quentin Lucet: If the foil breaks, Alex will no longer be able to keep up the pace as he did three years ago, which was possible because the foils were much smaller. Alex also says that the differences between his last Hugo Boss and the current boats is even greater than before.

In how many days will the new Hugo Boss be able to make the Vendée Globe?
Quentin Lucet: I would not be surprised to have the same kind of gap between the Vendée Globe of François [Gabart], 78 days, and that of Armel [Le Cléac’h], 74. So around 70 days if conditions permit.

Could this boat be transformed for The Ocean Race?
Quentin Lucet: It is possible because it is about the hull and foils, it works in that sense but you would need some work with a chainsaw to make the cockpit work, you could not have five sailing inside.

Will the current foils be those of the Vendée Globe? Is a V2 planned?
Quentin Lucet: We made foils that were best at that time, now the tools have evolved, but to know where we go with them first we need a feedback from the sailor and to have some full data analysis.
Vincent Lauriot-Prévost: There is no decision for the moment, either way.

Can Hugo Boss win the Transat Jacques Vabre?
Quentin Lucet: I think the goal is really work first and foremost on reliability. That is a long process which we saw with Charal which, one year later is now reliable, so the priority will be to get there in good shape, rather than put pressure on to get the win.
Vincent Lauriot-Prévost: But in the best of all worlds, if there were to be no glitches at all the duo and the  boat can win, as soon as they have got the first stages done it will be all flying.