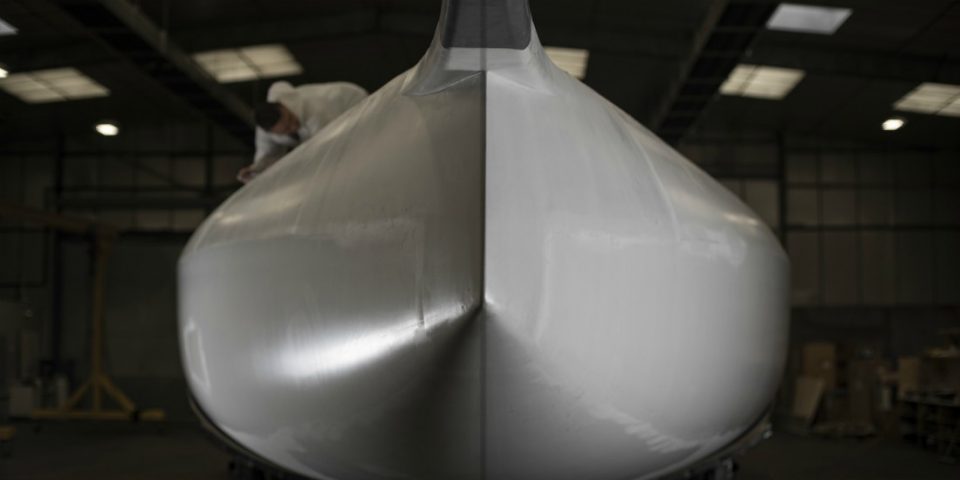 Sam Manuard: “I am super happy to run a projet like L’Occitane”

Sam Manuard is no stranger to success in Class 40 with his Mach series of designs and in the Mini class in which he cut his teeth as a designer and sailor. Recently he has been pushing the design envelope with his rounded chunky bowed Class 40 Banque du Leman which debuted with fourth in the Transat Jacques Vabre just weeks after it was launched. Manuard was chosen by his long time Mini class adversary Armel Tripon to design L’Occitane. Seeking a more radical, clean sheet of paper approach the Multi 50 winner of the last Route du Rhum seems to have just that, according to the images released November 25th.

Why did Armel come to you?
He came to me because they were interested in what I have been doing in Class 40 and the Mini Transat and also Armel Tripon and Michel De Franssu (boss of Black Pepper Yachts the builders) are the kind of people who think a little bit outside of the box. For sure going with a new designer to the IMOCA class can be considered a risk, but I guess they thought that taking that risk represented an opportunity to do something different. They are excited about it and very early in the project I was proposing to do something a bit radical in the hull shape.

Did they give you a blank sheet of paper and let you do what you thought best or did they have clear ideas what they wanted?
Actually they were very open minded. As a designer working with them was great I never felt any anxiety. They gave me the blank sheet of paper they were never scared of taking the risks. In fact I was more scared! (laughs) We tried as much as possible with the whole design group and especially KND Sailing Performance to compare our concept with something a bit more traditional. We started with a so called conventional boat, call it an evolution of the 2016 generation and that was our baseline. We did a VPP of that one and then made evaluations based on changing key parameters, like the hull shape, but definitely all the time we were making sure we were not going into too much of a corner.

How does L’Occitane compare with that original baseline boat, where are the key gains?
The scow shape has a big advantage in waves, especially when you are sailing deeper than 110 or 120 degrees TWA. This is really where it starts to pay off. From the start of the project when we defined what the objectives to optimise the boat for were definitely we had sailing lower than 110-120 was very high on the list. We wanted to be efficient there. My little experience sailing on IMOCA and all the feedback and all the videos we looked at for hours, clearly the IMOCA has a tendency to bury their bows when running. That was really something we tried to address. Being able to go longer with a front is really important. It is tricky to talk about the numbers because we know that the reality from the VPP is not the truth. But with the hull shape we know we are going in the right direction. The differences will be a few per cent but we will see when we sail the boat. I don’t want to be over confident in what we did. If we are able to stay with a front for two hours more that is a lot of miles, that is what we focused on. Our foils can be completely retracted and that can help in the light transition zones and can also help when you are sailing in super strong conditions and you want to no accelerate too much, you want a safe mode. That was a basic feature we get.

The bow shape is to the maximum allowed under the rule.
Yes. Absolutely. We are to within 2mm and the chief measurer has already checked the boat. We know we are OK.

Is there any weakness accepted for that bow shape?
There are maybe some weaknesses but not related to the bow shape. The IMOCAs are complex in the many different parameters. But if you just look at the hydro and have all other parameters equal then we are not very penalised anywhere. As you see in the IMOCA, often they are partially supported by their foils, so we are not really too much concerned to have some waterline length or stuff like that. Definitely the boat is very early to be not in displacement mode. So cutting off waterline length was not a problem.

Who are the design group?
There were a total of 12 persons including me. KND sailing performance were in charge of running the VPP and the CFD. All the structural analysis, the scantlings and the foils were by GSeaDesign and the systems, the bearings for the foils, the rudders systems were designed by Awentech and the aero coefficients, rigging loads, sail development for the VPP were defined by North Design Group and we also had Nat Shaver who is currently with American Magic as our foils expert designer.

What is your concept for the foils compared with the others which are new?
Our foils are pretty big, so in terms of the total beam with both foils deployed we are one of the biggest, that is one thing. The shaft has some radius in it so when we deploy or retract the foil it kind of acts on the cant of the foil. So depending on the actual heel of that we are sailing we will be able to adapt the cant of the foil by just adapting the extension of the foil. Our foils are not really designed to foil deep in the water, in that sense we are closer to the Verdier philosophy than the VPLP, so the idea is not to fly high above the water but to keep in touch with it.

Coming from the Mini and Class 40 is foiling a big, new challenge for you?
It is one of the challenges of the design but we are such a good group of people but actually the complexity of the rule is more of a challenge. Generally we call these boats ‘Open’ but in fact it is not the case. The rule has a lot of restrictions and one parameter of the rule has an effect on probably three or four others. So there is a lot to play with. In terms of the foil design we found our concept quite easily. My role within the design was really to keep the focus on what was our overall target and overall concept to have something which made sense in terms of winning the Vendée Globe.

And it is a great recognition at the top level for you as a designer, but a lot of added pressure?
It is a great achievement. As a designer, a sailor and a fan of the Vendée Globe, having this opportunity to run a project like this is a great feeling. I am super happy. There is some pressure for sure. There is a lot of pressure because this boat is under a lot of scrutiny, watched by a lot of eyes. But I like that. I love to make some choices, to make a design like this. What more could you ask for as a designer than this? I am not going to complain about pressure. This is the fun of being a designer. If we do it right it is all good.

The convex deck shape is a gain?
It is convenient for the 180 degree test, there is no trap at all for water on the deck.

And your cockpit ideas?
The cockpit is deep, aft and small. It is a one person cockpit. The idea of having a flush deck like this is that the cockpit like this is giving you frontal vision. For example at the pedestal you see forwards and see the sails perfectly. That was the decision with the convex flush deck. It gives us good vision and it is super, super simple to move the sails around the deck. For stacking it is easy because we can slide them across the coachroof, aft of the mast. With the cockpit well aft the living area inside is quite big. You have a lot of volume and good access to the back of the boat, you can stack the boat aft inside very efficiently.

Fourth was a reasonable debut for the new Class 40 in the TJV?
I was very happy with the boat’s performance considering it was launched so close to the race. The Swiss guys did a really, really good job of sailing it fast. It was their first Transatlantic, they were in effect the first rookies in the race. They showed some really good speed reaching close to Madeira and after the Doldrums and had a few setbacks with sails and things which prevented them staying with the first three.

You have a new Class 40 in build?
Yes we are building a sistership to Banque de Leman.

And you will sail with Armel in the build up to the Vendée Globe?
I will sail on the boat, yes helping with the optimisation and learning which mode we have to sail the boat. This is the very cool part of the project, OK I am a designer but I am a sailor and part of the reason he came to me is because of that. We will sail together at some point and that will be the real fun part.

Does the VG appeal as a sailor…next time?
You never know. It is very difficult to get there in the ‘driver’s seat’ as you have to convince so many people to give you so much money, so it is quite unlikely I would get into the ‘driver’s seat’. But, given the chance, I would love to. It is a great race, a great adventure. I would love it.

And it is good IMOCA and the Vendée Globe to have more designers involved in building new boats?
I think for sure. It makes it much more interesting for fans to follow. I am very interested to follow what the others do. I think that what Hugo Boss did is really superb. I really appreciate what they did, and Charal and so on. I look at it the same way any fan would look at it.

And could the boat do The Ocean Race? Do you have aspirations in that direction for the boat?
Yes, definitely. This boat could do The Ocean Race with some minor mods in the cockpit. But I don’t think the Vendée Globe and The Ocean Race boats will be that much different outside of the ergonomical aspects. In terms of hull shape, boat speed and things like that I don’t think they will be that much of a difference. If we take an analogy of all the work that has been done on other classes, the ability to go super fast downwind, as long as you can do that, whether you are alone or crewed is neither here nor there.