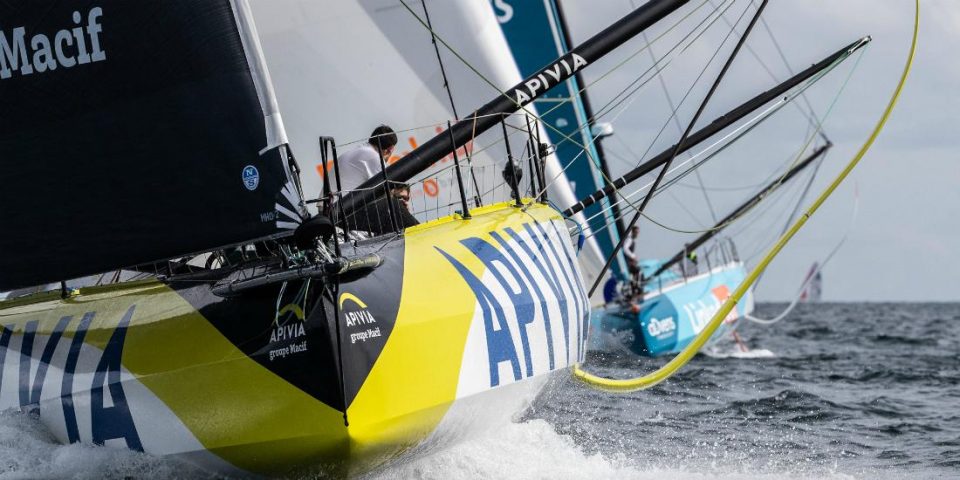 Who will win the Vendée – Arctique – Les Sables d’Olonne?

The start of the first ever Vendée-Arctique-Les Sables d’Olonne is on Saturday at 3.30 p.m local time. As before each major event, Tip & Shaft has solicited the opinions of the great the good of the ocean racing world in France as well as a few hand picked Anglo Saxons to ask the big question. We have Antoine Mermod, president of Imoca, Tanguy Leglatin the trainer in Lorient, Christian Le Pape, head of the Pole Finistère Course au Large, sailors Yann Eliès, Charlie Enright, Dee Caffari, Matt Sheahan and French based American Ryan Breymaier who works with Boris Herrmann. Also questioned was Gaël Robic, journalist at France Télévision.

After the cancellation of The Transat CIC and the Transat New York-Vendée, the Imoca season starts on Saturday with this new Vendée-Arctique-Les Sables d’Olonne which will take the 20 sailors south-west of Iceland then to the Azores before returning to Les Sables d’Olonne. That fleet of 20 includes 6 of the 8 with a latest generation Imoca. The two absent are Nicolas Troussel, still at the very early learning stages of Corum L’Epargne, and Alex Thomson who, to explained his decision not to race as he considered it “an unnecessary risk, so close to the Vendée Globe, to take the boats further north that Cape Horn is south. ”
Yann Eliès pretty much concurs: “Yes of course to qualify and prep these guys, you have to expose them, but I don’t see too much interest sending them to Iceland, it’s too far, if there are big technical problems, it’s a pretty complicated area.”

There speaks Yann Eliès who, like almost all of our six specialists, considers three solo sailors above the rest on this “VASO”: Jérémie Beyou, Charlie Dalin and Thomas Ruyant. “These are the three new boats that have sailed the most, they are more proven, with skippers who know them well,” confirms the winner of the last Jacques Vabre which he raced with Charlie Dalin.

For Lorient coach Tanguy Leglatin: “Most of them need to finish the race to get the days and hours sailing time and so really there are not many who are in a position to really attack. That is really except for those like Charlie and Jérémie, have the technical ability and the boats, the structure and preparation to truly go for it psychologically”.

Leglatin tips the Charal skipper for the top step. “He is the one who has sailed the most on his boat and even if he has his new foils which he still needs to learn to develop, he has done many things which are now well integrated into his way of pushing and using the boat, he still has a little edge.” Ryan Breymaier is more cautious, as he says: “Charal probably has the potential to be the fastest boat all the time due to their very low drag hull and powerful appendages. Saying that, in the attempt to make the most easier to deal with, they have detuned the appendages with their version two, going for a gigantic version of the Verdier concept used by the other two. This has not come without teething pains, so it’s not sure how the boat will perform.”

“THOMAS RUYANT WAS QUITE
FAR AHEAD WHATEVER THE CONDITIONS”
For Charlie Enright, “Charal has been the most consistent boat since relaunching last year. She trashed the fleet at the Azimut and showed amazing ability before parking up in the TJV and Apivia won’t be at 100% due to a delay in new foils, but have been going well in training”. Christian Le Pape adds: “Jérémie is today the only one who ticks all the boxes, like its potential and his knowledge of the boat, experience of the racing and solo racing.  Remember Charlie has never raced solo in an IMOCA.”

If the fact remains that Jérémie Beyou’s lead over Charlie Dalin seems more and more tenuous, Dalin saying on Tuesday that he is aiming “at least the podium”, Charlie also benefits from having the expertise of Yann Eliès and Pascal Bidégorry in his corner.  Eliès confirms: “Charlie’s biggest gain is that he finally had time to do a little optimising, homework and sailing. There’s a lot of things to understand and little things you pick up when you go sailing a lot that then become second nature when when you are racing and you know your base settings very precisely.”

Gaël Robic, who sailed recently on Apivia with Dalin out of Port-la-Forêt, also noted the skipper from Le Havre’s progress: “It may not be the fastest boat outright but it is the most allround and the most successful in terms of reliability / performance. And Charlie is getting to know it really well, his manoeuvers are fluid and clean.” Ryan Breymaier adds: “Charlie Dalin seems to be running a program in his image, very serious and driven, with small gains and all around performance the goal”.

But the sailor that caught the eye of the TV journalist was Thomas Ruyant: “It seemed really easy for him, he was quite far ahead whatever the conditions. In addition he is physically and mentally sharp. He has an approach which differentiates him. He is almost the only one who says that he is here to win the Vendée-Arctic. Indeed Ruyant, from Dunkirk, said this week, “Everything is good I want to take advantage of that and give it my best. I am happy with where we are. I’m good in my boots. ” Also speaks Ryan Breymaier: “Thomas Ruyant has a good idea what he wants in a boat after his previous Vendée, and his association with Antoine Koch (sailplan and sailing philosophy) seems to be paying dividends in ease of use and speed.”

“SAM IS STARTING TO HAVE A REAL MATURITY WITH HER BOAT”
Behind the Charal-Apivia-LinkedOut trio, none of the other three new, latest generation boats for the  “VASO” – Arkéa-Paprec (Sébastien Simon), L’Occitane (Armel Tripon) and DMG Mori Global One (Kojiro Shiraishi) won the votes of our experts as their objective is to finish and validate their qualification for the Vendée Globe. “It’s frustrating not to really have a sporting target in this race but let’s face it breaking something big would really risk compromising the program”, confirms Sébastien Simon. It is the same story with Armel Tripon on the Manuard scow design just fixed after hitting floating debris. “There is always the chance you end up in a bit of a battle but it I clear for me that my only goal is to finish, I will be careful. ”

Foilers from previous generations, some of which are now fitted with new foils – PRB (Kevin Escoffier), Initiatives Coeur (Sam Davies) and MACSF (Isabelle Joschke) last year and now Seaexplorer-Yacht Club de Monaco (Boris Herrmann) this year -, will they challenge the newer boats? “In the event of breakages, they might have a shot for the podium, but otherwise, there is no chance, “says Christian Le Pope, echoed by Gaël Robic: “I sailed with Kevin Escoffier and no matter how clean you are, being at 100% of the boat’s potential, when you see the new foilers go, they really go to another level.” The PRB skipper Escoffier said this week: “In 2019, we were still able to follow them close and be in the match now it is more complicated although we gained a few percent with the modifications we did.”

Antoine Mermod believes, however, that race conditions can favour of older boats: “As it’s a race that is going to be quite open with very varied weather conditions and a fair bit of upwind and close-hauled, I think it’s going to balance things out and so it s worth watching Malizia, PRB, Initiatives Cœur. ”
In this three way match opinions differ: “Kevin is pretty impressive, he hasn’t sailed so much but he’s maneuvering well.”comments Gaël Robic. Tanguy Leglatin thinks that Sam Davies “is a little notch above because of her level of experience with her big wings and from her solo Imoca experience.” Antoine Mermod adds “Sam is starting to have a real maturity with her boat, the big choices were made last year, we can imagine that she will keep this margin over for example Boris who has sailed less.”

But the it is evident that the new Malizia foils seem to boost the VPLP-Verdier boat of the German, skipper, as noted by Ryan Breymaier who works with Herrmann: “Malizia is sailing at the same speed as the top 3 in a straight line, with about 15 days sailing vs the year or more of development of the top 3. If there are any issues with the top boats, expect Malizia to be very close. The Malizia foils are the same as MACSF, VPLP designed for more moderate versions of the Charal V1. They have worked out of the box in all conditions, with no ventilation issues at all, and inspire confidence in the boat, which was heavily reinforced over the winter in order to be reliable enough to win the Vendée.”

Meantime the question is to know how the skippers are going to be able to manage this race and what we can learn from it. “Four years ago, Armel (Le Cléac’h) wins The Transat, Jérémie (Beyou) the New York-Vendée in front of Alex (Thomson), and on arrival, these are the three we ended up with on the Vendée Globe podium” concludes Antoine Mermod.

So the podium of our experts: 1. Jérémie Beyou, 2. Charlie Dalin, 3. Thomas Ruyant

The podium of Dee Caffari: Charal, Apivia and PRB. “Jeremie Beyou has had the longest time with his boat and has done a great deal of foil development. His confidence should be high. Charlie Dalin is rarely off the podium when he is racing and seems to have a boat to match his ability. Kevin Escoffier will push hard as he knows no other mode and we know PRB is an older boat but has gone through a great deal of development and I am confident Kevin knows the limits so will keep her on the edge for the race. I am super excited to see what this sprint race has to offer as the new boats line up to test development and check all is well ahead of November.”

The podium of Matt Sheahan: Charal, Apivia and LinkedOut: “Charal was the first of the new generation and the first to suffer some breakdowns. Apivia is another new generation boat with some decent miles under its keel and a win in last year’s TJV, Dalin proved that he could get the best out of a new boat without breaking it. Thomas Ruyant has proved himself in variety of offshore classes and demonstrated that he can win whatever the class. The disrupter could be Initiatives Coeur, a well proven and now, comprehensively upgraded boat with new foils and a sophisticated autopilot system that was ahead of its time in the fleet. Hugely experienced across a range of boats, conditions and race courses with thousands of miles under her, Davies can adapt quickly to changing conditions.”