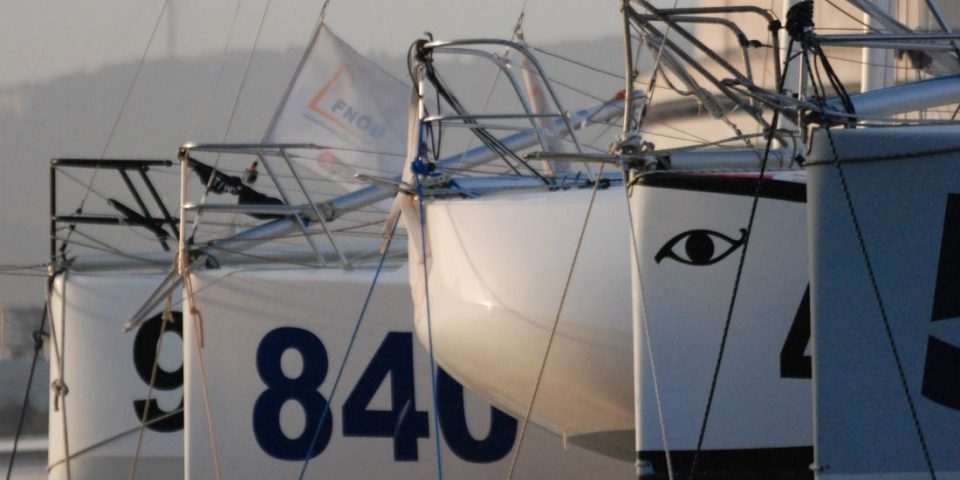 When the announcement came in March 2018 that the Barcelona World Race was to be suspended, held over until 2022-23, there was disappointment among the IMOCA racing community, especially among the up and coming sailors for whom the two handed round the world race served as an entry level opportunity, and indeed some sailors had already sold the race to their sponsors. But it also proved body blow to the Spanish solo and short handed racing fraternity.

In a country where the media shows only sporadic interest in ocean racing, the loss of a showcase sponsorship and sporting opportunity – an event which is seen by most of the sailors as a step towards the Vendée Globe – effectively terminated the hopes of making further progress at IMOCA level. Anna Corbella, Aleix Gelabert and Gérard Marin all had IMOCA projects for the Barcelona World Race. With the race on ice until after The Ocean Race completes, the Fundacion Navigacion Oceanica Barcelona no longer offers any kind of realistic accelerated pathway for Catalan and Spanish sailors to step up to solo and short handed racing round the world, although they still retain an old IMOCA for training.

Political uncertainty and an economy which is proving slow to recover reduced to the FNOB to a skeleton operation. And, when once there were hopes that Spain might become a force to be reckoned with on the Vendée Globe and in other solo races, Didac Costa is now the only Spanish skipper who is looking to be on the start line in Les Sables d’Olonne come November, again racing the evergreen former Kingfisher on a what seems certain to be a shoestring budget.

That said, although there is just Costa’s lone IMOCA being prepared in Barcelona the Catalan capital is a hive of activity. For more than six months some 15 Mini 650s have been based at the FNOB as an initiative started by Anna Corbella has been taken under the FNOB wing and there are very promising signs. This week they start the build of a new Marc Lombard mini which will be campaigned by Gerard Marin who is project managing the boat which is being build by students attached to the FNOB. A second boat will be built in 2021. Now based at the FNOB centre Jay Thompson is putting the final touches to his foiling Verdier design which The Coconuts Sail Team will launch next month.

“We have about 15 projects/campaigns whose aim is to participate in the Mini Transat 2021. For this, we have adapted our facilities with the incorporation of a crane to move the boats, a dock to work with the boats. Right now, for example, there are 12 or 13 Minis inside the shed doing refit works, others are looking for training only. Sailors like Anna and others sailors are mentoring and coaching them in their campaigns for the next edition of the Mini Transat.” Says the FNOB’s Carlos Clastre. “We have also incorporated Didac’s campaign into our structure, the FNOB collaborating with him to help him to be at the start of the Vendée Globe.”

According to Clastre there are positive signs with regard to the future of the Barcelona World Race. The very favourable Spanish Tax exemptions, which allow Spanish companies or companies with a significant Spanish base operation to positively offset their sponsorship and marketing spend on participating in the race, has been approved again by the Spanish government. And the socialist party which now holds the majority in Barcelona’s city hall is said to be the same party were in power when the race was inaugurated in 2007. “Sports events like the Barcelona World Race are favoured by this party, they understand the importance of sport in Barcelona and to Barcelona. Right now there are no big sports events planned for the next three or four years so we are very hopeful.”

The operating budget for the race which was postponed was to be €12m, costs having increased since the first three editions because of the planned stop in Australia. “The problem we do have is that there is really zero interest day to day in ocean racing by the Spanish media, not only for the Barcelona World Race and for Didac in the Vendée Globe but also The Ocean Race and so from that point of view we need companies like MAPFRE deciding to do The Ocean Race.”

Discussions will continue with City Hall during the next month to six weeks. “After the cancellation we need to be back with some real confidence, showing the capacity to make it happen in 2022. For the first time, we have plenty time to work on it because the tax exemptions were approved in the Spanish parliament by law and therefore, from this year, we already can use the tax exemptions with our sponsors. What we still do not have is the final approval of the municipality to move forward, and from our point of view the BWR project is a project that is progressing right now, we have talked with the IMOCA class, that has not announced the calendar for the coming 4 years yet, and we are confident to get enough sponsorship to be able to celebrate the next edition of the BWR”, says Carlos Clastre.

While the 2010 Barcelona World Race was largely funded by sponsorships and did not cost the city, the 2014 race required a substantial financial input to make it work. While there is no real consensus among those close to the race, some consider the city may give the race their blessing on the proviso it returns to a self funding model supported by sponsors.

With no Barcelona World Race and after trying unsuccessfully to find backing for the Vendée Globe Anna Corbella had to step back to the Mini class. “In Spain it is not easy to find money to do a race round the world which starts in France and is not well known here. To be honest it would be easier to find money to take part in the Paris Dakar than to do the Vendée Globe.” Corbella highlights. “For me the Barcelona World Race has to be achievable for local sailors. That is the only way we will get interest, a following, in this country. It is great to have the French and Hugo Boss, for example, doing it. But we need local people in it. Now I am hoping that some of these young guys we have now will progress through Class40 and in some years do the Barcelona World Race. We have people who have now done the Mini Transat. But there are also sailors coming from the Volvo Ocean Race. It should be possible to do a Barcelona World Race, to finish the race in a creditable position would cost maybe €1.5m”.

Spain’s most successful ocean racer of his generation Alex Pella admits he cannot see the Vendée Globe as a realistic target for him in the near future. “Honestly I tried for a long time and invested a lot of time and energy. But here it is seen too much as a French race. I have to just take the opportunities as they come to me.” And, like Pella, Didac Costa – who this week is still doing shifts in his day job as fireman with the Barcelona brigade – remains resolutely pragmatic, “When it comes to support, I actually think there’s enough out there but it proves difficult to materialise that support into actual sponsorships.”