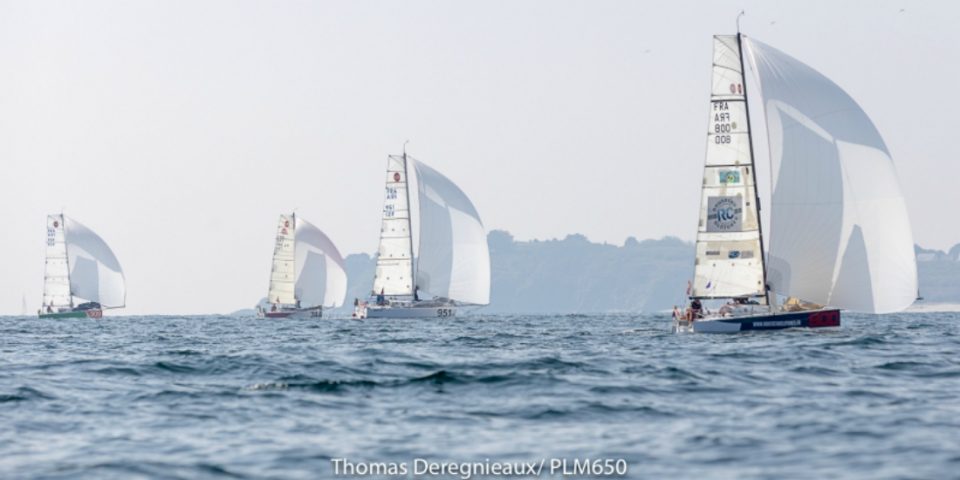 It does not happen so often in racing sponsorship: an equipment manufacturer gives its name to a sailing event. After a successful first experience last year, Plastimo is teaming up again with Lorient Grand Large, the organiser of the first Atlantic-side Mini 6.50 race in the season in France, and names the event the Plastimo Lorient Mini 6.50. For the french company based in Lorient, it means much more than simply lending a hand.

First, because this double-handed event takes place just outside the windows of Plastimo, based in Lorient La Base ever since the company was created in 1963, long before the former Keroman submarine base became the-place-to-be for offshore racing. “Being durably based in Lorient means a lot to us, and now even more than ever as we will soon start building our new head office right here in Lorient-LaBase, where we belong”, explained Cathy Millien, communications manager at Plastimo. It is an extra benefit for us as a manufacturer, to be close to the sailing elite and be able to be extremely reactive to their needs.”

It is not a coincidence that they are backing a Mini 6.50 event. Determination, sea-faring ability, co-operation between sailors, innovation and creativity are among the fundamental values of the legendary Mini spirit which are also shared by Plastimo. With the PLM 6.50, as they call it, the Lorient equipment manufacturer is working alongside a truly international class, another major feature for a company that achieves almost 50% of its turnover on export markets.

For several decades, Plastimo has been involved in supporting offshore and single-handed racers, and considers this strategy as a laboratory for its products, like an investment in the development of future champions. “Mini racers are alone at sea, they can only rely on themselves and trust their equipment,” explained Cathy Millien. “This relationship based on trust suits us fine: that’s exactly what safety is all about and it is Plastimo’s DNA.”

In its Lorient factory, the firm developed a specific liferaft, with a particular folding process so that it fits through the escape hatch on Mini’s and also features four extra handles to meet the Mini rule requiring that the skipper must be able to launch his raft in less than 15 seconds. “We manufacture this specific model on request, which can only be done because our factory is right here, next to a large Mini community location”. The Plastimo R&D also developed a new ISO12401, 2018-OSR compliant harness tether with a strain indicator, a retro-reflective thread and premium lightweight safety hooks : already a great success with Mini racers.

Being the title sponsor is even a bit more special this year, as a Plastimo staff member is also a PLM 6.50 entrant. Antoine Perrin, product manager at Plastimo for over a year, skippers the boat #850 Initiatives Générations Océans (a Lombard prototype), which was officially christened on Thursday with many Plastimo colleagues attending, just across the pontoon from their office. Antoine’s project was part of the hiring discussions : “Antoine told us about his sailing projects with the Mini-Transat as the climax and the need for extended leave in the autumn,” said Yann Cornec, Managing Director of Plastimo. That was in no way a hurdle. Quite the contrary in fact, as it is definitely a benefit for our company to have staff members who sail”.

Having Antoine Perrin involved gives a very important message to the Plastimo teams, as being a sailor is clearly an additional criteria in the recruitment process with the new generation of employees. “A real interest in boating or water activities brings additional value to all positions in our company,” says Audrey Gaudart, head of human resources. “We are very lucky to operate on the site of Lorient-La Base which provides interaction with the top racing community just there, on our doorstep. We want to strengthen that connection which contributes to enhanced product innovation and reliability, and also generates some kind of collective pride for our teams.” Applicants, watch this space !