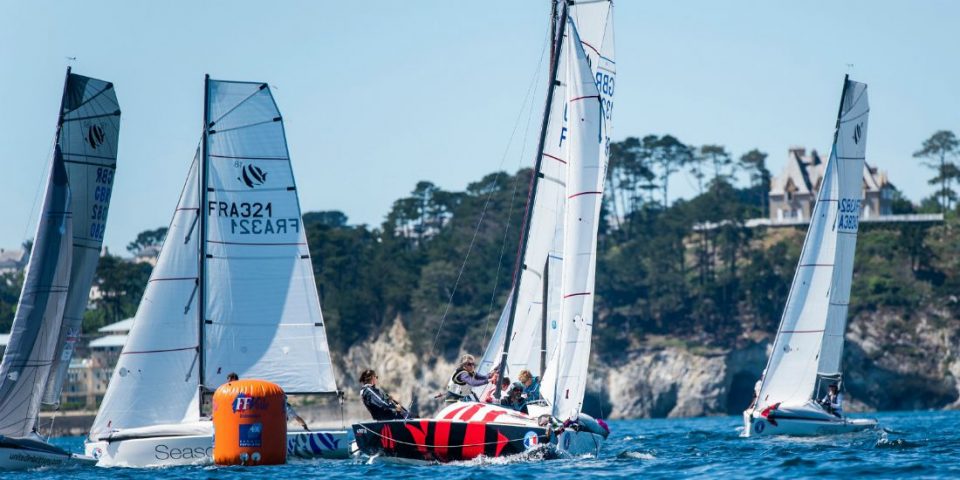 With 27,000 boats produced over the course of four decades, First is a name that has now spanned several generations of sailors and regattas. Starting with the legendary First 30, a half tonner which was a design by André Mauric, the boat which gave its name to the First line, through the First 50 designed by Philippe Briand, through the legendary First Class 8 designed by Jean-Marie Finot and Jacques Fauroux, aboard which many racers originally cut their teeth, the race performance range of Beneteau is well known to all who are passionate about sailboat racing.

Busy with its developments elsewhere since the year 2010, the world’s number 1 in yachting had kind of left the line to one side, that was before they decided a relaunch was due. “We had a jewel, a bit forsaken for a while, one which had a very good image and awarneess”, summarizes Luc Joëssel who is sailing performance product manager for the Vendée based boatbuilding giant. “And on their part, our dealer network put pressure on us. They all had very good memories of the commercial success of the First series including the 31.7, 36.7 and 40.7″

In the summer of 2018 the opportunity came to acquire Seascape, the line created by Kristian Hajnšek and Andraž Mihelin. The two Slovenian entrepreneurs are former Mini Class racers as is the architect of their boats who is of course a certain Sam Manuard. Heavily influenced by their Mini 6.50 experiences, the three designed four simple, fast, portable and accessible boats ranging between 14 and 27 feet. “They are very well spec’d with top-of-the-range standing and running rigging, carbon poles, no  backstays or sharp chines and so on”, appraises Joëssel.

Above all, they muster together a wide community of racers who enjoy meeting up at the many events throughout northern Europe. And that, for Beneteau, is a key thing : “Today, our customers do not only buy a boat, but also into a narrative and  an experience“, explains Jean-François Pape, Beneteau’s Director of Communications  who arrived a few months before the acquisition of Seascape. “Now, we communicate as much about people enjoying and using the product.”

Beneteau are not content to brand these Slovenian sportboats in their colours. Instead now a real one-design circuit for the First 24 was launched in 2019, comprising events in Croatia, Germany, Denmark and in Italy. In France, the First Cup was set up with three constituent events: Spi Ouest-France, the Grand Prix de l’Ecole navale and the Beneteau Cup.

The goal is to develop a committed community of passionate racers who have real sporting ambitions: “We made the First 24 a One Design, writing class rules”,  explains Luc Joëssel.” And we have made a fleet of 15 boats available to our dealers along with trailers and shoreside assistance.”

The dealers enjoy the game and benefit, many happy to be back on the water, inviting customers, prospective boat buyers and even a few famous racers like Jean-Luc Van Den Heede, Gaston Morvan or Luc Pillot, Olympic champion as well as the winner of the first First Cup ! “We’ve always organized events for the owners“, says Jean-François Pape, “But all around the First, we have found a very tribal phenomenon, they are more passionate than the usual clients.”

Now the First “tribe” will meet at the Paris Nautic on Sunday, December 8 at 12h to celebrate the first winner of the First Cup. See you on the 2020 programme!