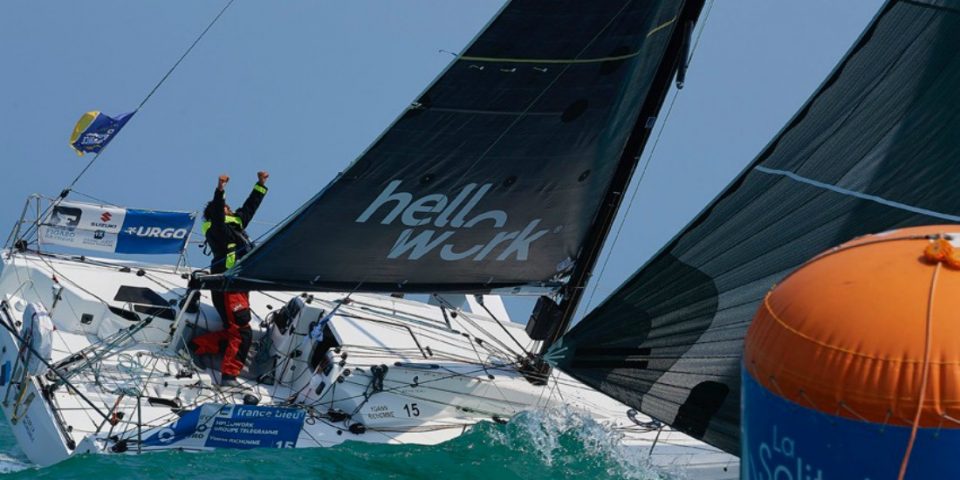 [Sponsored article] How Incidence won the sailmakers race on the Solitaire

It is one of the unofficial rankings of the Solitaire Urgo Le Figaro, but it is highly prized and keenly observed and there is a commercial benefit. Whose sails are working, whose sails are winning? This year one brand has dominated the 50th edition of the summer classic that has held us all in suspense through this month of June: Incidence.The Brest-La Rochelle based sailmakers owned the entire podium – Yoann Richomme, Gildas Mahe, Anthony Marchand. But they also equipped the first two rookies – Benjamin Schwartz and Tom Laperche – as well as three of the four stage winners. It’s an amazing outcome for the sailmakers Incidence whose last wins were back in 2016 and 2014.

For all involved in the Figaro circuit, the challenge of this 50th anniversary edition was vital: “We knew that the arrival of Figaro 3 would reshuffle the cards and give an opportunity for newcomers to emerge,” explains Julien Gresset who was in charge of the class at Incidence, “For us the challenge was to be in a position to really do well in this first year. Because that is where the first market share is won.”

The first problem is that the new one design arrives very late with an extremely tight race schedule before La Solitaire that starts at the end of May.
“We were allowed two sailing slots on the Figaro No. 1 in the autumn, one afternoon and then one day with our first set of prototype sails,” says Julien Gresset. “After that we had to wait for the boats draw at the Nautic in December in Paris. And we had to “recruit” a sailor who was boat was among those to be delivered in January so we could accumulate as many sailing days as quickly as possible.” So a collaboration begins with Fabien Delahaye who agreed to sail immediately he got his boat without putting his boat into the yard. Every day counts: the Sardinha Cup, first race of the season, starts at the end of March.

At Incidence, the design of the new Figaro’s sails is shared between the duo: Ronan Floc’h, based in Brest, and Maxime Paul, based in La Rochelle. The two men have long years of 470 Olympic sailing in common as well as lot of experience in the Figaro 2. Floc’h does the ‘white’ sails (mainsail, J2, J3), and Paul the flying sails (spinnaker, gennaker), which are produced on the spot, as close as possible to the designers. “It’s tough on the logistics.” Recalls  Julien Gresset, “But then they are with the sails from start to finish in their entirety.” In cases of disagreement……”It is the designer who has the most feeling on the subject that prevails”, says Ronan Floc’h.

The prototypes were designed from the architects’ plans and modelling of the Figaro 3 by Jean-Baptiste Boullet. “With these elements, we knew that the boat not as stiff as its predecessor, you will need to reef earlier, the mast, it is very stiff, it will be necessary to make sails not too deep and so on.”Summarizes Ronan Floc’h, “But the big unknown for us is the foils. We realise that a 5 degrees change accelerates the boat and loads up the sails.”

The first test sails confirm many things. The first set of the flat sails is a good base. But there are also doubts. They have seven different drawings for the gennaker. But other sailors come on board too. The Macif team who work in particular on rig set up and settings, then on come the Arthur Le Vaillant-Pascal Bidegorry duo, whose speed is noticeable at the Sardinha Cup. “It’s the first time I’ve worked with Bide, he’s impressive!” notes Ronan Floc’h. Yoann Richomme,  Gildas Mahé, Michel Desjoyeaux, Eric Peron and Anthony Marchand also bring their input. For all the rule is the same , the development ideas of the sailmakers are shared; those of the sailors belong to them. Each week the sails are returned to the loft floors after sailing and testing. Julien Gresset accumulates the information gained over the miles sailed: “From the very beginning of the season, it was important to always be on the pontoon, for everybody. It is the small details that make the difference”.

At the end of the debriefing of the Solo Maître Coq the series design is frozen and goes into production. The time available to deliver is tight because there are 107 sails to deliver for the Solitaire, less than 3 weeks later! And there are last-minute orders, like a J2 for Jérémie Beyou and for Yann Eliès, who are with another sailmaker, in itself these are signs that that reputations in the new class are being forged.

In total, between January and June, Incidence produced some 210 sails for the Figaro 3 including the sails of the winners. “It was really intense and sometimes we were limited in terms of planning. But we learned a lot this year.” Says Ronan Floc’h. “Winning in this series is unique, the Figaro 3 has pulled everyone’s level right up.”