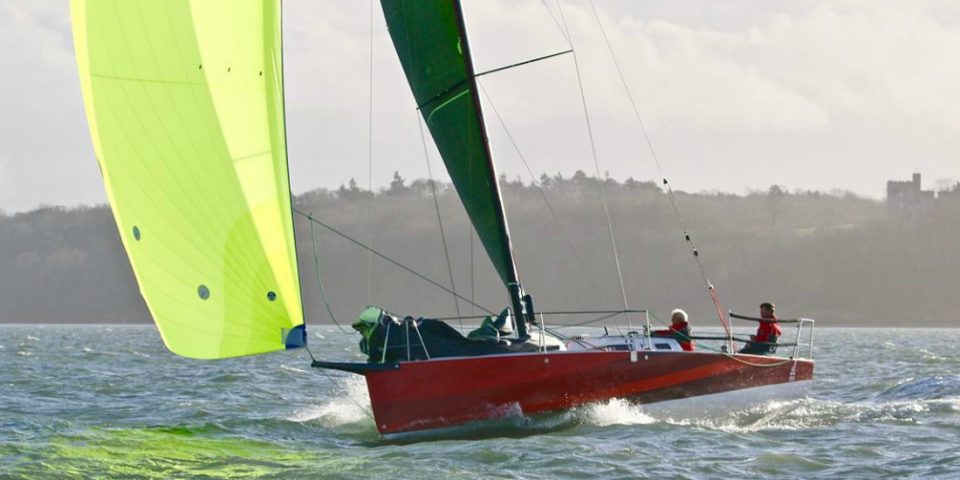 It is quite a specific segment of the yachting market but right now it is a dynamic, flourishing niche that is igniting the interest and passions of sailors, and stimulating the appetites of boatbuilders to develop new designs.

We are talking about the 10-meter cruiser-racers which are primarily targeted at short handed racing under IRC. This market was initially driven by the Transquadra, but now the general growth of two handed racing is immediately evident, 50 boats raced at the last Spi Ouest-France and 63 are signed up for the next Fastnet.

The phenomenon is now being well served by French based J Composites. In 2018 the team, under Didier Le Moal, which has been building J/Boats udner licence in the Vendée for almost 25 years, alerted the well known Johnstone family, originators of J/Boats to the trend.

“J Boats is a brand which originates on the East Coast of the United States. Their boats are all designed by members of the Johnstone family”, Didier Le Moal reminds us. “They are quite conservative and it required a logical, considered proposition backed by strong arguments to convince them. But together we have achieved very consistent results.”

To develop the J/99, which targets short handed races contested in coastal or offshore modes, took nearly a year of constant to and from, discussions and debates between Newport R.I and Les Sables d’Olonne in order to reach the best compromise. The result is something which addresses the French, and increasingly European culture of short-handed sailing but also still satisfies the J/Boats traditions in America.

The boat was launched last December at the Salon Nautic in Paris and by January nearly 60 boats had already been ordered by the time number 1 touched the waters off Hamble in the Solent.

The competition in this segment of the market, notably the Sun Fast 3300 and JPK 10.30, also launched in 2019, but their machines are considered more specific. J/Boats have gone for a 32-footer which targets allround performance.

“The Transquadra does tends to produce more specialized boats now,” says Frédéric Bouvier, J Composites sales manager, “We wanted a product which works in all conditions, with speed and handling across the wind range and the potential roles.”

In other words it is not to be forgotten that the first stage of the Transquadra does not always prove to be a run downwind, as was reminded by the last edition, but other considerations were important such as incorporating features and performance which mark out the J/99 as a nice family weekender.

So the J/99’s design is a bit wider and straighter than is usual in Js but still the hull offers a wetted surface which is moderate, it is good for VMG running… but efficient upwind! The flat keel is taxed less than the bulbs under IRC and ORC and so is used now. Twin rudders are available as an option, as are ballast tanks.

The drive for versatility and consistency were part of the reason that J Composites collaborated with AG+ to design and specify a special low CoG aluminum mast designed specifically for the J/99, with an integrated track.

“There is a prejudice against aluminum masts by many sailors but actually they are much easier to set up in terms of tuning the rig, while carbon is  often stiff and much less versatile”, points out Frédéric Bouvier. “And it gives us a boat which is to a suitable price point which really performs without inherently requiring the carbon mast option.” That carbon option can sometimes be as much as 20% of the initial cost.

“I do not see the value of the additional cost”, says Philippe Guénnal, owner of the boat number 2 of the series, already the winner of this year’s Télégramme Tresco Trophy and  Ronde  Sénane race. “The aluminum mast makes it possible to set up and trim the mainsail very efficiently and easily.”

An important aspect is simplicity and ease of use, being able get the maximum out of the boat across the wind range without specialist knowledge or skills. It an essential part of the J/99 specifications that the boat can perform direct from the user manual. “The customers in this niche are amateurs. Yes, they are experienced and enlightened, but nonetheless they are amateurs“, sums up Le Moal. “So we must offer them an easy boat to sail which is versatile.”

The CEO of J Composites points out the ‘works’ J/99 site was raced on the La Trinité-Cowes by young woman attached to company who earned 4th in the two handed IRC, her only experience of the boat being the the delivery from Les Sables d’Olonne by way of her learning the boat.

The results of this seasons races are likely to be heavily scrutinized by potential customers and builders but so far the results to seem to validate the ‘polyvalent’. 3rd in the double handed and 4th (behind bigger IRC boats) at Spi Ouest France in April, then 2nd and 5th at the Duo Cat-Amania, in June.

“With the exception of Spi Ouest where we finished 2 points behind the Sun Fast 3300, we still are beating the competition every time“, rejoices Frédéric Bouvier. That is an outstanding record after six months of sailing. But there is only one year left before the start of the next Transquadra…