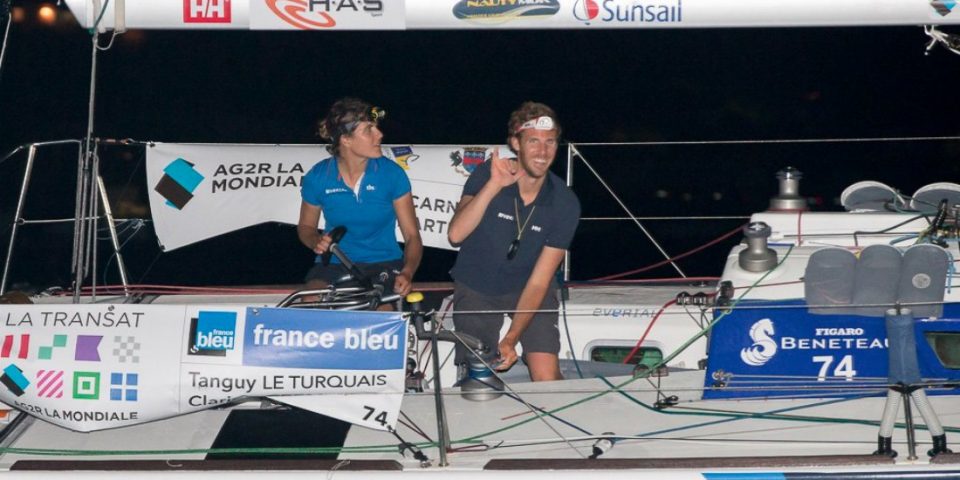 There were three women of the 38 sailors who took on the 2018 Transat AG2R La Mondiale, six in total out of 123 during the last Route du Rhum, 5 of 47 on the Solitaire du Figaro that has just ended. Evidently women still have a hard time making their way in what remains a predominantly masculine world of offshore racing. That was the underlying reason that the organizers of the Volvo Ocean Race brought in a mandatory requirement to have one or more women on the race crews for two editions. There is progress in the IMOCA world as now it looks like six of more than thirty registered skippers on the next Vendée Globe could be female, a welcome bounce back after an all-male edition in 2016.

But many consider that a real upturn for women’s participation in sailing will be fostered over the coming years after World Sailing voted at its Sarasota Annual Conference last October to introduce a mixed gender offshore racing event in the Olympic Games of the Paris Games 2024. Since then a number of new initiatives have emerged to open more doors to women. The latest example: the organizers of the Transat AG2R La Mondiale announced last week that registration fees (3,000 euros excluding tax) would be exempted for mixed crews as well as the creation of a specific classification.

“The announcement of World Sailing was a definite trigger,” recognizes José Messer, AG2R La Mondiale’s sponsorship director. “The transatlantic could become a pathway to the Olympics.” He is reckoning on “five to seven” mixed gender pairs starting from Concarneau on April 22nd. Could the event eventually become fully mixed gender? “That is not our ambition, especially as even if the pathways are put in place, it will take time to train sailors up this kind of format,” he continues.

Today even if the different training structures (Pôle Finistère Course au Large, Lorient Grand Large, Team Vendée Training, CEM ) host female skippers – mainly Mini and Figaro – there is no specific women’s sector. “When we come from Olympic sailing we do not really know how to then progress to the world of offshore racing,” explains Mathilde Géron, former 470 racer who is now on the helm of the Diam 24 La Boulangère on the Tour Voile.

It is partly to change this landscape and mainly because of the Olympic initiative, that the Brittany Region and Crédit Mutuel de Bretagne have recently announced the launch of a women’s talent search and a support programme for a Figaro 3 both modelled on their Espoir programmes.

To date, seven applications have been received in Port-la-Forêt most of the candidates emerging from the Mini 6.50 class, which has led the unit to shift the selection trials to December after the Mini-Transat. “Our call for applications also aims to see if the demand exists,”  explains Christian Le Pape, head of the Pole Finistère, who is project manager of the program. “Today, the objective is to see what is the precise level of interest, knowing that those who are not taken on the CMB Bretagne program can still be supported by the Federation”, continues Christian Le Pape who is also involved with the FFVoile alongside Corinne Migraine, vice-president in charge of competitions and performance. Migraine welcomes the Breton initiative but regrets that it is only intended for the 18-30 years: “We must not limit ourselves. The idea is to see girls coming from very different backgrounds.”

There are similar things going on at Macif, Jean-Bernard Le Boucher who responsible for the sailing activities, tells Tip & Shaft: “We are looking at the best way to contribute to the Olympic Games 2024”, while Estelle Graveleau, who heads the Vendée Formation Team, is “thinking about the way to train sailors for this Olympic arena especially as our partners are interested.”

For its part the Federation is preparing to launch a call for applications for the first sailing events, particularly the first ever Offshore World Championship in the L30 which will take place in October 2020 in Malta.

That first selection that could take place very quickly as the European Championship, also in L30, is set for October in Trieste, Italy. This event will be organized under the authority of the Eurosaf, the European Federation, with the collaboration of the manufacturer and promoter of the L30, Rodion Luka the Ukrainian Olympic 49er medallist, which has also just announced the launch of a mixed doubles circuit modelled on the likely format of the Olympic event (three days / two nights).

“We are looking forward to seeing the NoR for this European Championship as we ready to publish our call for applications,”  says Corinne Migraine. “I think it will get the girls motivated and then we will support them as we support women in dinghy sailing.” She believes that the initiative should be seized with immediate effect, “The L30, we all agree that this is not the ideal boat, but we have a racing program with a fleet available racing on a format close to that of the Games, why not go there? It will get things moving for sure. We must offer things to girls who want it now because I’m also afraid that some go will go abroad, like Sophie Faguet has joined Belgium. ”

Faguet responded to the call of Jonas Gerckens, who offered the chance to sail on the Class40 and to test out for the L30 for a possible collaboration under the Belgian flag. She is far from the only one to turn to the Olympic test. Mathilde Géron has told Tip & Shaft she wants to move in this direction. Cassandre Blandin races the Figaro 3 in the colors of Klaxoon and  Cécile Laguette says: “All this really makes me want to go and race for a medal in offshore racing at the Games so today I’m looking at how to go sailing in the L30 at the World Championship next year, You have to start early. ”

The FFV, the training groups and the sailors are all of one mind when it comes to the Olympic goal, it is also the case for race organizers. OC Pen Duick’s Mathieu Sarrot who discussed the topic with Corinne Migraine at the head office on Tuesday. FF Voile says, “There is a lot of energy, a lot of people are thinking about creating mixed doubles events following the Olympic format, but we still have to find the best way. ”

The new president of the class Figaro, Yvon Breton is very proactive: “It would be a pity if the Figaro circuit is not used as a reference for the Olympic discipline. I can not guarantee that by 2020 we will have something concrete in place because the calendar is already well established, but by 2021, we will be more aligned to that aim.”

In England things are moving at a distinctly slower pace, Hannah Diamond and Henry Bomby have been training together in La Trinite during the last two months on the prototype SunFast 3300 but this weekend take delivery of the boat which they will race together on their quest to compete in the Mixed Offshore Class in the 2024 Olympics. Former Figaro racer Bomby and Nacra 17 sailor Diamond met on the Volvo Ocean Race. The boat is being loaned to them for their campaign by Jeanneau’s English distributor Sea Ventures which is run by Nigel Colley a very experienced short handed racer himself.

Initially they will race on the upcoming Channel Race before taking on this summer’s Rolex Fastnet Race with objective of moving on to the Middle Sea Race and next year’s Offshore Worlds. “Right now we have been focused in learning the two handed discipline together, making sure our manouvres are slick and our boathandling is clean.” explains Diamond who races mixed handicap IRC and Fast 40 + racing on Red Shift and other boats. She is one of a new generation of female sailors who have grown up through mixed gender sailing from 29er to Nacra now to two handed 30 footers.

“What we want to do is establish ourselves early and be able to move forwards with an advantage. From a personal point of view my experience of racing with a squad leads me to want to do as much as we can independently, that seems to be the way to maintain your advantage. We would anticipate next year training and racing in the Figaro Beneteau 3 together in France because that really is where the highest level of competition in this size of boat is. So much of what we see will be about the ability to step into different boats of this size and perform to the highest level, just as it was in the different boats for match racing. We have so much experience in terms of the technical support and coaching in the UK it would be useful to have this made available to teams like us in the near future.”