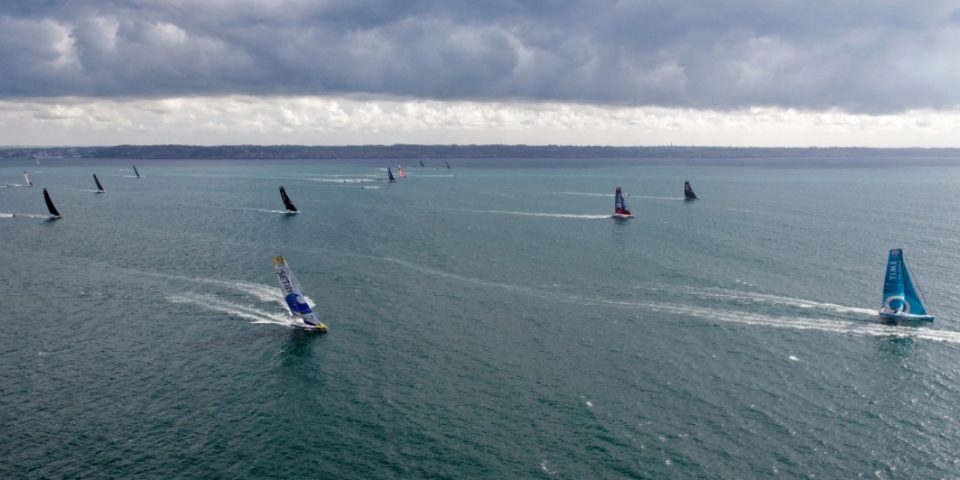 The ninth edition of the Vendée Globe will start November 8, 2020 from Les Sables d’Olonne. As of now there are approximately 35 active skippers all planning to start the race in 19 months time, some of whom are already building qualification miles to have the best chance of being selected. The Notice of Race limits the number of entries to 30. Tip & Shaft makes a round up of the projects that are vying for selection.

At 19 months from the start of the ninth edition of the Vendée Globe there is already considerable pressure on skippers  who want to be on the start line. And it is now just five months from November 1 which is the deadline for the the ‘statement of application’  – the formal notice of intention to compete – that is a mandatory prerequisite for entry, according to Article 8.1 of the Notice of Race.

Last December, Tip & Shaft counted 29 candidate projects pitching for the pinnacle solo ocean race non-stop around the world. Now there are more than 35 (see list below), all aiming to enjoy that emotional journey down the famous the channel out of Les Sables d’Olonne to the start line.

Many skippers are already in good shape, including no fewer than 18 who have foilers (including 8 new boats) for skippers who have realised their full budget. Right now the notable exceptions include Thomas Ruyant, who had to abandon the last race, who still is without a title partner.

And there are still many yet to land sponsors. Jean Le Cam revealed this week in the Ouest-France newspaper that he has only 15% of the million and a half euros which he is looking for if he is to take the start of his fifth consecutive Vendée Globe. Roman Attanasio is also looking to find some of his budget, even if he says he is “sure to leave”.

Sebastien Destremau has had to give up his lofty vision, a project for  “4 brothers 4 boats”  canning the idea of getting all his brothers on the Vendée Globe at the same time. But he also considers himself “sure to leave” for a second time with a small budget of 300 000 euros for his current Face Ocean. But he needs to bring it into line with the current IMOCA measurement and safety rules which means means fulfilling the 180 degree self righting test, without the help of ballast.“For me it would be completely stupid to put on a canting keel both in financial costs and in terms of reliability and safety.” He is aiming in another direction looking to add enough volume to the deck so that the boat does not roll the other way.’ explains Destremau who thinks to add second-hand foils to his 1998 vintage Finot design.

Among the newcomers to the race: Manu Cousin (Groupe Setin), Clarisse Crémer (Banque Populaire) and Damien Seguin (Groupe Apicil) all have enough budget; Ari Huusela (Ariel II), Alexia Barrier(4myplanet), Maxime Sorel (V&B-Sailing Together), Clément Giraud (Envol by Fortil), Miranda Merron(Campagne de France) and Pip Hare (Superbigou) don’t yet have their funding packages in place. That’s the case also for Belgian skipper Denis Van Weynberg who last year bought the former Spirit of Hungary from Nandor Fa. But he will compete in the  Transat Jacques Vabre (with his boat-captain Lionel Régnier). “We set a budget of 1.7 to 2 million euros (ex Tax), we are a little late but not out of the game, we don’t yet have a title partner but it is progressing well, ” he tells Tip & Shaft.

Other potential entrants are less certain: Erik Nigon has not yet landed a buyer for his IMOCA but is also on the hunt for sponsors to go racing. He ranks his chances at 70% of doing the Jacques Vabre and at 50% being at the start of the Vendée Globe. As for English skipper Richard Tolkien he is bringing his IMOCA Rosalba up to the rule (a 2001 Merfyn Owen design) after trying to sell it. He hopes to be in the Fastnet and Jacques Vabre (with the Norwegian Rune Aasberg).

Some newcomers have enough momentum to join the list of candidates. Figarist Benjamin Dutreux will announce the launch of his project this month, as he said in Tip & Shaft in March 2018. He is looking for additional partners, in addition to those who have supported him in the Figaro: “We are well advanced on the purchase of a boat that will be financed through a bank loan. Our first objective is to be at the start of the Transat Jacques Vabre “. The Vendée sailor says, reckoning he needs about 500 000 euros for this first year (right now he says he has half of this amount).

Yoann Richomme, who can always fall back on the vintage Lombard designed Vivo A Beira owned by Pierre Lacaze, abandoned his Multi50 ambitions after his Route du Rhum win and hankers after the next Vendée Globe, now supported in his searches by Le Hub by OC Sport for whom he is racing La Solitaire URGO Le Figaro.

Conrad Colman is said to be in discussions to charter the former Acciona from Offshore Team Germany. “We are looking for an operating budget of about 1.5 million euros for the Jacques Vabre and 2020 season,” says New Zealander Conrad’s wife Clara.

In all that means 36 to 38 IMOCA projects, significantly above the 30 boat limit set by the Vendée Globe Notice of Race. The pursuit of the limited number of starts accounts for the “race for miles”which has been under way since last year. For those who have not finished the last Vendée Globe, nor have a new boat – the two categories which are guaranteed a start (16 sailors right now) – selection will be decided on number of miles raced in the IMOCA Globe Series between 2018 and 2020.

A race for miles is not really part of the game for big projects or names like those of Isabelle Joschke (1,122 cumulative miles), Clarisse Cremer and Kevin Escoffier who are at the bottom of the list. Indeed the latter two have not really go under way, their respective projects start in in July. “The reality is that right now there is an uncertainty that will last until the summer of 2020“, says Isabelle Joschke, Ronan Lucas, director of Team Banque Populaire under whose umbrella rookie Cremer’s project, adds: “I am a little worried, but in terms of our schedule we do not could not do anything earlier.”

There may be some who don’t make the cut according to the race for miles (the final ranking will be made after the New York-Vendée) but they can apply for one of four wild-cards that SAEM Vendée, organizer of the Vendée Globe, have in their pocket to allocate. But no one at all wants to bet on that option. “For sure there is going to be tension and disappointment for some. It would be simpler if everyone just worked together to increase the number of spaces in the port in Les Sables d’Olonne,” said Kevin Escoffier who will take over the former PRB.

“All teams, large or small, invest a lot to find sponsors and develop projects. So it would be a pity that some could remain on the dock. In fact that could then deter people from trying to do the Vendée Globe in the future,” says Ronan Lucas.
Isabelle Joschke agrees: “We are working with committed projects requiring a fairly high level of investment. It seems overcomplicated to then refuse entries of a decent quality. We consider that we are a team that is active within the class, we play the game by being present in the fleet since the Monaco Globe Series, and so we believe we should deserve our place“.

Reflecting skippers worries to the IMOCA class general assembly in mid-April it was decided to ask for the field to be enlarged from the 30. But the response of the organiser, SAEM Vendée, remains ‘the notice of race is authentic ‘. Race Director Jacques Caraës emphasizes the increase in the logistical and infrastructure requirements brought by the foilers, some of which have a ‘wingspan of over 11 meters. “To accommodate 30 boats, we already need to develop the right side of the pontoon with additional walkways, it is difficult to increase the number of places, unless we put a pontoon in over in the commercial port”. says Caraës.

And the race director reminds us that though it is hot topic nothing is likely to change before November 1, 2019, the deadline for applications: “What Yves Auvinet (president of Vendée region) told me rightly is that at the moment there are only 18 firm statements of application, so it is difficult to ask them to increase the number of competitors.”

The candidates for the Vendée Globe

All are automatically selected, subject to fulfilling their qualification passages