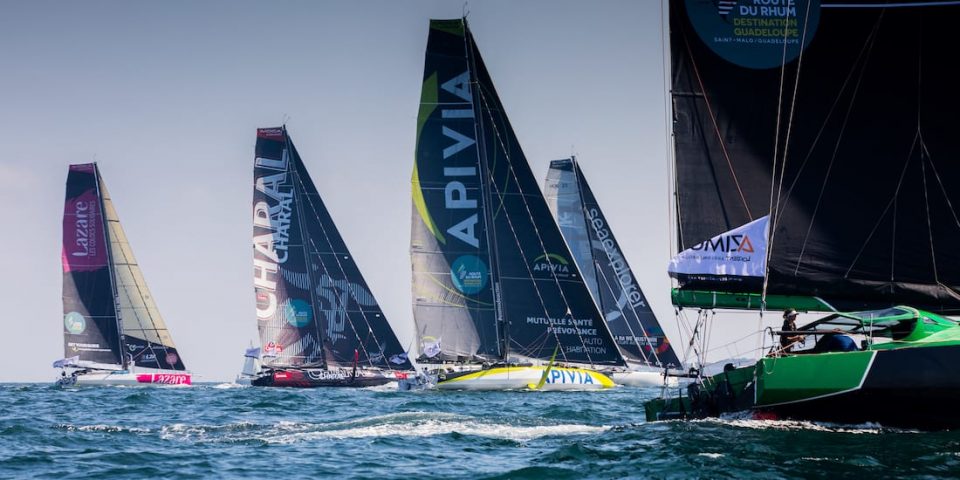 Imoca/Ocean Fifty: who will win the Route du Rhum?

As before every major event, Tip & Shaft has invited a panel of experts to analyse the line-up for the Route du Rhum-Destination Guadeloupe which starts on 6th November. In this first part dedicated to the Imoca and Ocean Fifty competitors, we talked to Antoine Mermod, the president of the Imoca class, Jeanne Grégoire, head of the Pôle Finistère Ocean Racing training centre, Daniel Souben, trainer in La Trinité-sur-mer for Orlabay, the sailors, Yann Eliès, Christopher Pratt and Vincent Riou, as well as Jacques Guyader, journalist with Ouest-France.

IMOCA: THE FAVOURITE, HIS RIVAL AND THE CHASING PACK

The pressure will be on Charlie Dalin at the start in Saint-Malo. Not because this is his first Route du Rhum, but simply because he is the favourite. After dominating the three events this year – Guyader Bermudes 1000 Race, Vendée Arctique and the Azimut Challenge – the skipper of Apivia was beyond reach and while he has not yet won the race, he will be the one to beat.

Yann Eliès who was his co-skipper, believes “the boat has reached maturity and the skipper is rigorous, focused, psychologically solid and above all capable of really putting his foot down,“ as we saw in the Azimut Challenge and then the two training sessions organised in Port-la-Forêt. “We can be certain that Charlie will continue to find ways to progress, even if they are minor points before 6th November,” declared Jeanne Grégoire.

All of our consultants noted that Apivia has an advantage when reaching, which may be the deciding factor at the start of the transatlantic race, even if for Christopher Pratt, “the actual situation may be very different: they may catch up from behind as in the Transat Jacques Vabre last year, and downwind sailing represents two thirds of the course.” That is why many see Thomas Ruyant as Charlie Dalin’s most serious rival, as he is “capable too of keeping up a hellish pace,” noted Jacques Guyader, and he was the winner of the Transat Jacques Vabre where Apivia had been the favourite.

Behind these two skippers, the fight will be on. “The Route du Rhum has always seen the strong come out on top. Those who did well in the last Vendée Globe will be the ones to watch,” suggestedAntoine Mermod. “But this is the first time that so many new boats have entered the race and the standard of preparation is high.” Among them, Jérémie Beyou will be sailing his new Charal designed by Sam Manuard with an innovative rudder system, which stabilises the boat when flying. “Charal seems to be a strong boat and I feel that Jérémie is very confident. He is much further advanced in his preparation than four years ago and has had the support of Franck Cammas, who rarely gets things wrong and he is still looking for a major win on an Imoca,” added Jacques Guyader.

Kevin Escoffier (Holcim PRB) and Maxime Sorel (V and B-Monbana-Mayenne) are names that often crop up when looking at this sort of list. They soon got to grips with their Verdier designed boats and did well in their first event, the Azimut Challenge. Just like Christopher Pratt and Vincent Riou, Yann Eliès added Justine Mettraux’s name to the list, “a warrior, who has everything it takes to succeed and has a boat that has been tried and tested.”

There are two unknowns to consider: Louis Burton, “always ready to leap onto the podium if a place appears,” noted Jeanne Grégoire, and the only skipper along with Charlie Dalin whose Imoca foils fit in with the old rules (so are bigger). We know that the skipper from Saint-Malo is capable of keeping up a fast pace, even if his preparation is a bit of a mystery for many. As for Yannick Bestaven (Maître Coq V), he does not appear to have the right timing to shine, but having won the last Vendée Globe, his name comes up more often than others in the same situation.

Sam Davies (Initiatives Coeur) for example, Boris Herrmann (Malizia Seaexplorer) and the title-holder, Paul Meilhat (Biotherm). Like Kevin Escoffier and Benjamin Dutreux, the latter two have to compete in The Ocean Race less than two months after the finish in Pointe-à-Pitre, “a series of races that looks as appealing as a mountain to climb,” according to Vincent Riou. “For those starting a new relationship with their sponsor, the extra pressure may affect their race ability.”

With eight trimarans lining up, the Ocean Fifty category is the smallest along with the Ultims in this Route du Rhum, but it is also one of the most undecided. The Pro Sailing Tour, which is the basis of the calendar for the class, has seen many contests over the past couple of years with three sailors standing out according to Jacques Guyader: “Sam Goodchild, Quentin Vlamynck and Sébastien Rogues seem to be that bit above the rest, but this is a crew championship,” summed up the journalist from Ouest-France.

This may change the pecking order for these 50-foot multihulls for which the Route du Rhum represents the most ambitious challenge. For our three racers and experts, who have each raced at least one transatlantic race aboard these boats, Sam Goodchild (Leyton) is from this point of view a length ahead: “Sam really knows what he is doing sailing solo, having launched his boat early on. She is a good all-rounder and he has worked with very good people,” said Christopher Pratt. “He is just the right age for this type of race. Experienced, but not yet full of rust!” added Vincent Riou, who followed the Pro Sailing Tour this year alongside Thibaut Vauchel-Camus (Solidaires en Peloton-Arsep) for whom he will be the router in the Route du Rhum.

Talking of age, Quentin Vlamynck is the youngest skipper in the group. A newcomer to the event, but winner of the 2022 Pro Sailing Tour, the skipper of Arkema is one people wonder about: “Quentin may want to take it calmly at the start of the race and will have to overcome his emotions,” commented Daniel Souben, who trained the Ocean Fifty fleet three times this year in the framework of the Orlabay training group in  La Trinité. “But he has shown he knows what he is doing and knows his boat like then back of his hand,” he added, having seen the boat built in the yard run by his mentor in Médoc, Lalou Roucayrol.

Two former winners to keep an eye on

The third skipper whose name comes up most is Sébastien Rogues (Primonial), “with all lights on green,” according to Christopher Pratt. “Victory in the Transat Jacques Vabre, the construction of a new boat with his sponsor, he feels confident and he has the timing right.” These three skippers may make it tough for two former winners who are competing: Armel Tripon (Les Ptits Doudous) won last time around, but his season was upset when his boat was dismasted. “He is lacking preparation, but I’m not that certain he was better prepared four years ago!” warned Daniel Souben.

As for Erwan Le Roux (Koesio), the winner in 2014, he has so far struggled to get the most out of his new VPLP designed boat (launched in 2021). “He has a huge amount of experience that could make all the difference, but he no longer has the lead that he had in the past; he sails in the pack and has to get used to that,” noted Yann Eliès, who won the 2013 Transat Jacques Vabre with him and will be helping Jean-Yves Bernot with his routing. That is something that may count too, according to Daniel Souben : “Those who work for a long time with the same router have a trump card up their sleeve. You can feel confident, do not hesitate and follow instructions, which means you can get through a transition and gain a real advantage.”

The weather factor will also be a determining one, perhaps even more with the Ocean Fifty boats than for the other classes. Strong winds may allow older boats (Eric Péron’s Komilfo) or those that intrinsically perform less well (Solidaires en Peloton-Arsep skippered by Thibaut Vauchel Camus) to succeed.