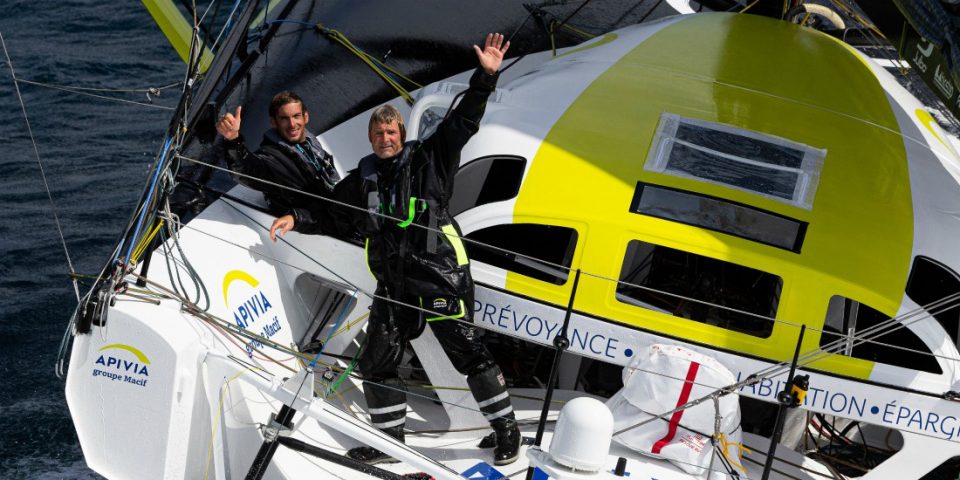 Charlie Dalin: “A great situation for me en route to the Vendée Globe”

Charlie Dalin is docked this week in his original home port, Le Havre, with the dream ticket, a new Verdier designed IMOCA Apivia ready to race their first big transoceanic race. Dalin was graduated from Southampton with a degree in naval architecture in 2006 and from 2015 he has been in the Skipper Macif programme until early in 2018 Apivia, a new Macif brand, announced their support for Dalin on a four year Vendée Globe programme. After finishing third on the 2015 Transat Jacques Vabre as co-skipper to Yann Eliès, Dalin pairs up again with Eliès for the upcoming Transat Jacques Vabre. Tip & Shaft spoke to Charlie……

Charlie the Transat Jacques Vabre is nearly upon us, you race your new Verdier design Apivia, sailing with Yann Eliès, have you achieved all you wanted to in the build up period since you launched?
It’s going well, we have been able to sail as much as we wanted to. We’ve sailed about 3000 nautical miles with the boat so far which is good since we launched on August 5th. We tried to find a good compromise between sailing and dock time with the team to work on the boat. So, so far so good. We didn’t have any big problems regarding structure or big problems with systems. We have had four to five metres of sea state and winds of over 30 knots but nothig too sustained. We haven’t seen really big winds because we haven’t found the opportunity, but we have been in some good winds to test the structure.

Obviously with your qualification and experience as a naval architect you have your informed input into what you wanted from your boat, but does it actually give you more confidence in the boat and its structure because you know the ‘numbers’….?
Ponders…….Well yes I’ve seen all the finite element analysis, I know how the structure works. But yes we got uncertainties regarding the slamming load in these boats because before only the front area of the hull was subjected to heavy slamming and now with foils this zone moves around and sometimes we are slamming very aft on the boat. But I think we’ve done well in our structure. We’ve done something strong. We’ve managed to keep the boat fairly light because of the geometrical trick we used regarding the chamfer on the junction between the hull and the curved deck. We have freeboard as well, I think most of the boats have taken advantage of this geometry solution to carry less structure and less surface panels to make the boat lighter. For my boat I think we’ve managed to make a stronger boat but without increasing weight compared to the previous generation. I’m pretty happy with what we’ve done but then again we are still in the testing stage of the boat, we are in the sea trial phase so far we’ve had no issues so it’s going very well but I think we will need to wait to the end of this trial to determinate how the boat is.

And in real terms how important is the Transat Jacques Vabre to you, is the result important or the data collection or the reliability more valuable, what is most important?
I think the Transat Jacque Vabre is important on the road to the Vendee Globe as in essence it is the first two weeks of the Vendee other than the stage out of English Channel. The Atlantic part of the Vendee is a very important test for this boat to be able to sail for a long time, for a sustained period downwind in the trade winds to see how the boat behaves to see how we can tune the boat better and to optimise the sail plan for boat next year. All the data we will record is a gain as its very valuable for the Vendee. It’s important for me to finish this race but then again sailing this boat at 80% in order just to finish is no use either because you aren’t able to test this boat in real conditions, we have to be clever to realise when to push it and when not to push it. But for the boat to be good to use we have to test it in a proper way so I think we need to be smart how we sail the boat and when we put down the throttle.

What do you especially value in sailing with Yann Eliès?
Yann is very good with preserving a boat. He takes time and knows what to do to avoid breakages. He’s been sailing IMOCA’s for a long time now. He’s got experience of these boats but I also think we have to be clever in the way we sail the race as well. We know how fast we are and we know in which conditions we are faster for example than the 2016 boats.

So what is the Apivia sweet spot?
When you open the sails a bit and bear away from upwind, this new generation, these new boats take off much earlier than the previous generation, close reaching. So we know, for example, that as we get out of The Doldrums and into the SE Trade winds we are in the conditions where we can go really fast compared to the previous gen. I think knowing our strengths will be good.

And what have you learned from Yann?
I’ve sailed with him before so I’ve learnt a lot sailing with him on the 2015 Transat Jacques Vabre, I have learned a lot, how to handle boats this size he’s very good at manoeuvring. He knows the drill and he knows perfectly what angles are needed to go gybe. And he has a very good feeling with boats and intuition on how to trim and how to go fast so I think we make a good team.

This is a multi-million Euro programme with a high profile new boat operating in a high stress, relatively high risk environment, do you sleep well, do you feel the pressure?
No not really, I think I’ve got a pretty feeling not to come under any pressure. I’ve been sailing for the Macif group and I know the feel of it and it suits me well. I’m quite comfortable, I’ve got a good sponsor and I understand everything that’s going on and I think I believe I made good choices.

And here you are lucky to have a new boat and a dream project and the likes of Yoann Richomme and Yann have not managed to find backing for the Vendée Globe, from outside of France it looks like there are many variables and a measure of luck when it comes to finding the big ticket sponsor?
I don’t know. It is hard. It’s a mix of having someone on the boat being capable to of a good performance and also being in the right place at the right time. I think there is no universal recipe on how to find a sponsor for the Vendee. I do think all the time of how lucky I am to have Apivia as a sponsor and a good new build and four year project. But I’ve had times without sponsors and I know how hard it can be to find sponsors. I know that I’m really lucky and happy. I know what I have in hand and I give thanks for it every day. I couldn’t have imagined better for this stage in my career and I feel very happy to be where I am now. I’ve got a great sponsor who believes in me and here we are, building a story with Apivia. The project is with MerConcept which is a great structure and with so much knowledge and experience on racing boats. With the team it’s a great situation for me en route to the Vendee. Apivia itself is a fairly recent company, so they need to get known and seeing how the projects ran and what we were getting makes me have confidence into going on the route and learning from this massive experience and seeing how popular the Vendee is in France and IMOCA races are the right choice for them to start the Vendee and in IMOCA. The 6th March 2018 was when project was given the green light and right now I cannot wait to start the race.

Thoughts on Alex Thomson’s boat?
Not that much because we haven’t seen the boat sailing. I was not surprised to see this configuration because we worked on that configuration as well. I proposed it to the team in the early stages of the project and we studied it hard and in the end we went for something with a compromise where you can more easily see something more conventional. I’m looking forward to finding myself alongside him. What we don’t know is where the boat (Hugo Boss) is standing regarding trials for the boat. We know more or less how it is going for the French teams because we train with them, so we know what’s going on and more or less which boats are ready obviously we don’t know anything about Alex’s and the same for the performances for the boat. I know where I stand against the new French boats, so far, I’m pretty happy with what I’ve seen on the water. It is as we expected and its promising for the future. We learn which boat is fast in different conditions, and like now the segments we do are pretty short and it’s a good indication but not the same as the race. I’m waiting for the Transat Jacques Vabre to really see who’s faster in which conditions or not and same goes for Alex’s boat. I’m looking forward to seeing how they are performing and that’s going to be interesting.

What’s the plan after the TJV?
If the boat is in a satisfying state to take the journey, I will sail singlehanded back to France, the idea would be to stop in the Azores to get some crew but again that really depends on the journey. We will not take it if it implies any risk regarding the boat so there may be a plan B but plan A is to sail solo and then we will make the final call in Brazil.

What about foils, do you plan a second set soon?
We are thinking about a second set maybe, if not definitely we will learn more on the course of this Transat Jacques Vabre. Technology is definitely moving very fast regarding the foil. We would have to decide very soon. It is crazy (to be thinking about new foils after launching the boat in August) but there’s so many layers of carbon it takes a very long time to build. I don’t know if we are going for V2 or not but what is certain is that the same boat can perform and behave very differently with two different types of foils, especially in an area where gain can be very important it’s a bit too early days to make the call.