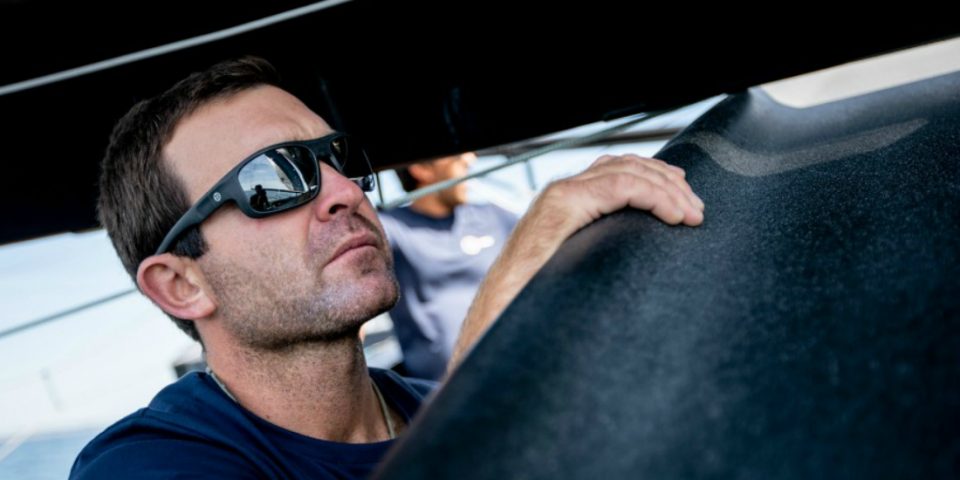 Charlie Enright: “Our boat won’t do the Vendée Globe”

Fifth overall twice in the Volvo Ocean Race, on Alvemedica in 2014-15 and on Vestas 11th Hour Racing in 2017-18, Charlie Enright, 35 (Rhode Island, USA) opens a new chapter in his sailing career when he competes in the two handed Transat Jacques Vabre race from Le Havre across the Atlantic to Salvador de Bahia, Brazil. Partnered by the hugely experienced Frenchman Pascal Bidégorry aboard the VPLP-Verdier designed former Hugo Boss on which British skipper Alex Thomson finished second on the last Vendée Globe. Tip & Shaft talked to Enright in Le Havre…..

So two days to go Charlie, the weather outlook is well known, everyone is getting ready, how are you feeling about your first two handed IMOCA Race? You must have an idea of where you would hope to finish in this 29 boat IMOCA fleet…..
I think psychologically I am ready. Now I’m excited to get going. I know that we are never going to make up for some of the experience these other guys have – not only in the class but sailing with their respective teammates. Over the course of the 6 months that we’ve put in I think we have a good perspective on the whole thing. And if we are game day players we could give it a nudge. You never know….

Pascal really is multitalented, better known as a Volvo Ocean Race winning navigator and  sailing big multihulls, but he is a great allround sailor on boats of all sizes. What have you learned most from him?
Sailing with Pascal is interesting. Every day is different. He’s amazingly talented, technically savvy and you learn precision in the short-handed configuration. We are very lucky to have him as a co-skipper in this race and I couldn’t imagine learning more from anyone else.

Anything in particular, one would imagine you have a well rounded skillset from two Volvos?
I’ve learned loads about just sailing the boat there’s a lot of things I need to do on this boat that I was never responsible for doing in the Volvo. Whether it be actual sail handling things or at the navigation station, and from all his multihull experience you need a comprehensive understanding of how the foils work and how to position the boat accordingly.

What have you done to the boat since you got it, it was by all accounts the fastest, most optimised of the last generation boats?
Not a lot, I think we received a boat with factory settings and we’ve been working little by little to bring it back to where it’s been in the past and then we exceed that as far as its future performance is concerned.

And how have you gone in training against the new boats in Port La Foret?
The boat is very condition dependent, it’s no secret this boat has been oriented to go downwind and it seems to do that quite well compared to the other boats in training but then there are other points of sail where you can tell the boat is four years old.

What is the longest training sail you did together?
Eight hundred miles or something like that. We’ve done cumulatively something close to 5000 miles. Between the deliveries as well as three stand-alone three offshore races so its racked up pretty quick.

What is your expectation, your hopes in this white hot pre Vendée Globe fleet?
We haven’t set our expectations through the roof that’s for sure and will have a better idea once we see the game day forecast. Part of what we are doing here is making sure the boat gets to Brazil. I think that’s important for the future of our campaign. We’ve got a big delivery back with crew but that only works if we get the boat there. So here we are starting our small and seeing where we end up.

So the return trip you are starting to evaluate crew for The Ocean Race?
We are starting to look at crew for The Ocean Race so the delivery back is part of that. Also we are going to be doing some modifications over the winter so delivering it back is the fastest way getting it here. We are looking at new foils. Five years ago these were the biggest, baddest foils around but when you look at them in the dock they are old news.

Who makes the choices, what is the decision making process when it comes to foils and so on?
As you’re aware we’ve partnered with MerConcept and a lot of the work is done through them. It’s been a real fast track if you will into our French immersion. They are a great group of guys and having Charlie Dalin (French skipper who has new Verdier design Apivia) and his program to lean on means it’s a mutually beneficial relationship as we develop our own program and look at the future we have a lot to teach from each other. That has been a very fruitful relationship and one where our mutual interests align.

So have you actually lined up two boat testing with Apivia?
A little bit of two boat work but just development, stuff like that and obviously we are together in the Port La Foret training camp centre so that’s been good.

And Francois Gabart (Vendee Globe winner and owner MerConcept) is quite hands on with your project?
He pops in, he takes an interest certainly in the relationship with the program but he’s a busy guy. Be he’s omnipresent as you’re well aware.

What is the program after the TJV?
We are going to deliver the boat back, it’s going to go into refit and we hope to be sailing middle of March. Then we’ve got some transatlantic training that kind of coincides with sponsorship commitments in Newport Rhode Island in the middle of May. And then hopefully back to France to continue working in that part of the world and helping the group prepare for the Vendée Globe. Even though it’s not in our future they’ve (MerConcept) certainly have taken us in and we feel obliged to continue helping them and their singlehanded quest as well.

But your boat won’t do the Vendée Globe, there is no chance of any offers swinging a change?
Our boat won’t do the Vendée. There is not a possibility of that for a multitude of reasons – one being we need a platform to train on during the Vendée and the other being here we are working with MerConcept and I’m sure the last thing Charlie Dalin would want is the platform that he helped develop sailing against him around the world!

So you will build new for The Ocean Race?
Plan is to build another boat the details of that haven’t fully come together yet but that is the blue sky scenario. If you were to build a new boat I don’t think you would want to launch much later than January 1st 2021. If you look at Charal and then strive for that schedule they have made by launching early and being in the water for that extra time – it’s important. You want to get the latest and greatest, but you want to balance that with reliability and time in water. You want at least a good 10 months out if you could draw it up that way.

And why are you back for The Ocean Race when it has moved to the IMOCA class?
It’s a continuation of my quest, I’ve done it twice now and haven’t achieved the result I wanted. It seems natural – regardless of the platform – to continue playing it out. We could be racing soap box cars around the world and I’d sign up. This now is a welcome to the platform for me personally you know that having done the last two editions in the one design format now we feel like we are personally able to step up to plate in the technical field and it will be a good test. Make no mistake we couldn’t have accomplished what we have without the one design format in our background, but we relish the opportunity to move forward.

What are you thinking will be the size and composition of the IMOCA Class in TOR?
They are hoping for 5 to 8 boats in the IMOCA fleet but that’s just complete guessing at this point. I think with the attrition race in this class certainly you need eight boats. If you start with five you want to finish with five so it’s better to have more than that.

And what is your view of the French ocean racing culture you have been immersed in these last few months, it is a far cry from Newport Shipyard…?
It’s great, I mean other than the language barrier. If you want to learn a lot about short-handed offshore sailing, there’s no better place to be. It’s been tough on our sailors a little bit, but such is the life we chose. I should be seeing more of them this winter with the boat in the shed.

And how is your French coming on?
I can basically say a bunch of words that aren’t suitable for public use that Pascal taught me, or I can order a meal but not much past that. I think I’m definitely improving; some people don’t want to learn but I do – before I hit return on google translate I actually have a read about what I’ve put in there. The culture is a big change but that’s just part of it. There’s a big change on what we are doing on the water too so it’s only fitting.

You are instrumental in moving sustainability forwards globally in the ocean racing.
There are some welcome challenges that come with 11th Hour and their initiatives as far as sailing in general, boat construction, the IMOCA class, the Ocean Race. So it’s all very healthy. I think shifting the industry is paramount as far as what we are trying to do. We are constantly working with our suppliers whether it be Musto on clothes or North with the sails to make sure that they are following all our sustainability philosophies as that is such a specific part of what we do.