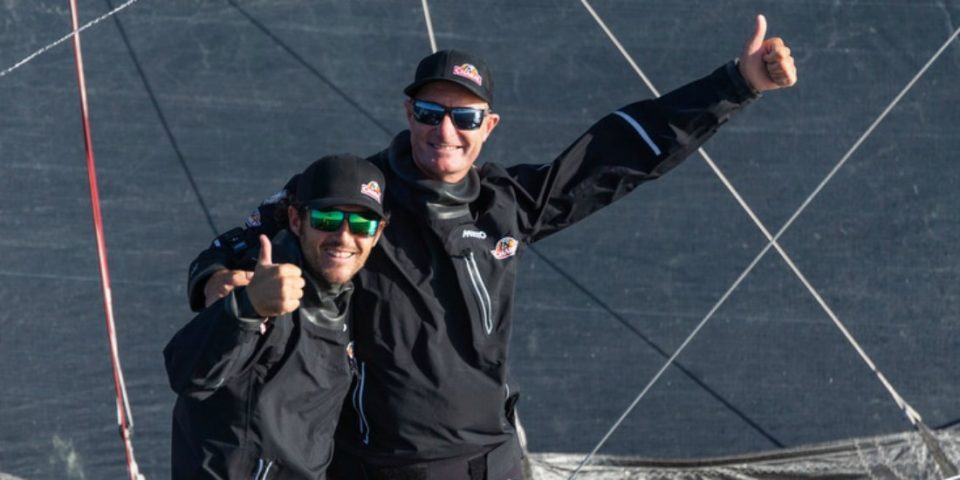 Christopher Pratt: “Jérémie knows I can die on the deck for him”

With a professional career which now stretches to nearly 15 years Christopher Pratt has known the highs and the lows. As a rising star of the French offshore sailing he won the Challenge Espoir Credit Agricole talent search contest in 2005 and went on be selected as the young potential solo skipper of the future in 2010 when he was given the helm of the IMOCA DCNS for the Route du Rhum. But from there he struggled to keep his solo career on the upwards trajectory. As a co-skipper he has been successful partnering Armel Le Cléac’h to third in the Transat Jacques Vabre in 2011 and scoring the same result again in 2013 with Jéremie Beyou who he first sailed with in 2007. After looking unsuccessfully for funding during 2013 and 14 for the Vendée Globe he seriously reviewed his career prospects. But he battled back to compete in the 2016 La Solitaire du Figaro with ‘no budget at all and borrowed sails’ to restore his faith in himself with tenth place. Then on the 2017 Transat Jacques Vabre the Multi 50 Drekan Group he was racing with Eric Defert capsized 300 miles from the Azores and Pratt was trapped outside the boat, seriously concerned for his life. But Pratt, whose mother is from London, now feels life is on the ‘up’. He has worked with long time friend Jérémie Beyou on the IMOCA Charal since the first testing and training now with successive wins in the Défi Azimut and the Rolex Fastnet Race, Pratt is one half of a partnership which is considered favourites to win the upcoming Transat Jacques Vabre. Tip & Shaft caught up with Pratt and asked him ‘how English are you really….??’

Chris considering on the last Transat Jacques Vabre you capsized you are in a good place now with Charal and Jéremie?
Yes we are in great shape we are where we planned to be six months ago

Remind us of your English roots, are you proud to be part English?
My mother was born in London but to be fair we never spoke English when I was young so that’s why my English is not what I want it to be. My Uncle is working and living in London as a lawyer. I’m proud of my English heritage, yes, but I also think it’s interesting in terms of personality. I have an English mindset and that helps with my attitude I’m more private and reserved in that I don’t show my emotions. On the boat I think that is a big asset, I am very, very even. And I think that comes from the Anglo Saxon side. I don’t fail and I don’t show if I’m hurt or maybe in a bad mood. I think that’s a key point in the fact that who I’m sailing for knows I’m really stable and I have a stable attitude. I’m always smiling and I’m happy to do whatever needs to be done.

But you have had some peaks and troughs in your career?
Yes it’s nice to be where we are now. Two years ago I was up and down with sailing. Three years ago I was no longer sailing in the IMOCA fleet at all. I’m really thankful with my friend Jéremie. This, now is really important to me. Now I know that we’ve done an amazing job. Three years ago it was hard for me. It was a difficult moment in my career because I was looking for sponsors for the Vendée Globe, trying to have a local Marseille project with sponsors. It is just didn’t work so it was really hard for me on a personal side at the same time I got a divorce so it was a really down moment. So if you’re looking at where I am now in this amazing boat with this team it’s a brilliant position and much better than three years ago. I’ve learnt to just focus and climbing back. When you’re looking a sponsor, and nothing matches it’s a very personal thing when you’re looking, and you don’t get there. And when I capsized with Eric that was a key point in my life it can be stupid when you say it like that but when you are so close from dying you feel life on a completely different way after that. When it happened I was outside and I could not get into the boat because the ‘pouffe’ was jammed in the companionway. I was under the boat and I was trying to swim but couldn’t breathe at all I kept trying to swim and finally managed to get out but then I had a rope around my shoulder and it was hard for me to try and continue to swim so I had to go deeper to get on and into the boat. It was really a key moment which happened after two bad years. I had rebuilt myself with the Solitaire in 2016 I sailed the Solitaire and finished 10th with my old boat when I had no money at all and just my friends who helped me. After those year I didn’t know if I could sail again. So, I was still in the top ten and that was really important for me.

How did you come to pair up with Jérémie?
I start to work a bit with him for preparing for the Route du Rhum and I was in the team for the trip back from Guadeloupe. But he abandoned and we spent the time testing. I stayed over the winter in November and December with the team and then in January he called me and said do you want to be with the me for the TJV. It took me just one second to say yes. We had talked a lot before, what kind of skipper you need and I said ‘well I can do it but maybe I’m not the right person to have’. But in the end we have sailed for something like 15 years together and we are really connected, we are in the same way of sailing. Everything is easy when we are sailing together. We don’t need to speak too much. We have the same ideas at the same time. Even with the training of the boat when he’ll say, ‘don’t you want to ease a bit of main traveller and I’m already about to do it. It’s the same both ways. It is really easy for us to sail together and I think that’s the key point. We find because we think okay we have to learn lots about the boat. He does not want to have to teach someone else about how to sail with, so now he and I can just focus on learning how to sail the boat even better.

So what makes a good co-skipper and you a good co-skipper with Jérémie?
I think that an important thing is trust and communication, I’m really stable and I get on, I’m always in the same mood and mindset so I think it’s really important to be a good co-skipper. He is quite emotional and for that we don’t have the same attitude but I’m always trying to be positive so that’s a key point. I think the other key point is I’m a good solo racer so if he is sleeping it would be the same as if he were on deck. We are completely complementary and then can take turns sailing the boat. It’s a partnership of equals and its important in the Vendee Globe to have this mindset. I’m sailing alone and if my co-skipper is not complementary it’s difficult, he’s not there to help where I’m less good he is. He is there to do the exactly same job as me. Another important point is the impact I have on the team because I always take care about the team, the ambience, the team spirit. What I’ve also really learnt I when I’m sailing with Jérémie I really want to give my best, even more than when I’m alone. I know that it’s an important thing for them because he knows I feel like I can die on the deck for him and for the project. I think it’s even more important that I have that level of attitude more than when I’m sailing alone.

Armel and Jérémie, compare and contrast….
They are completely different, Jérémie he is able to get into such an amazing state you that to win he’s got the competition and the win inside his veins. It just amazing. When you are with him you have to do the same thing or try to do the same thing so now it’s really impressive. I also learnt a lot about him completing Vendee Globe on the podium and then the Volvo so we discuss a lot about that and I can see all the progress he made during the past three or four years, it’s amazing and he’s a top skipper – I think he’s the best now. Jérémie is more up and down and Armel is calmer, Armel is Federer, Jérémie is Nadal.

So what after the TJV?
I’m looking for sponsor for the next Vendee Globe one after and I’m still with local projects in Marseille and then I’ve got a company called Marsail and we use it to build coaching for companies using sailing skills. We are using how you manage sailing projects in the business side so we have been doing a lot in the company for two years so now its taken a bit of time and then I’m going to continue to work with Jérémie and Charal in order to prepare for the Vendee Globe. I’m coaching and have so lots of different projects and different work but I’m really happy about that so it’s good not be just focused on one thing and to have something completely different to work on. I’m really happy about my life now and if you think about what we said at the start, realising how lucky I am now by looking back two, three years ago when I didn’t know what I was going to do with my life. It’s a really good time and I’m enjoying it and saying, ‘you are where you are now’ and you just have to enjoy it – maybe it’s going to end tomorrow but just live for the moment.

What’s your view on the cutting edge of IMOCA?
We are living a completely crazy time because we are learning how to fly so it’s just the Vendée Globe is completely different race to sail and there’s so many things to learn. Each time we just spend one hour on the water we learn something new and we learn how to trim the boat, how to have a good fly and not too high. I’m waiting for the T-rudder to really fly.