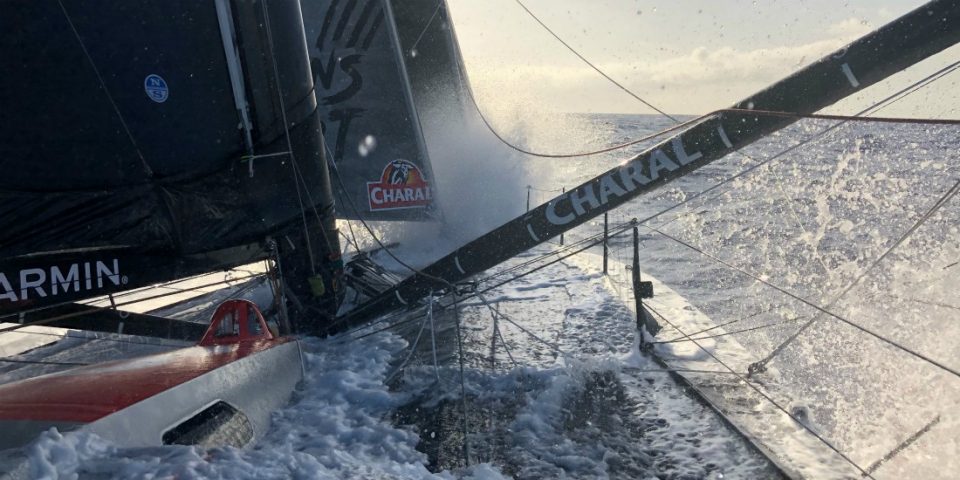 The Transat Jacques Vabre (so far) picked apart by the routers

The Transat Jacques Vabre started on Sunday from Le Havre. After five days of racing by Friday, the leaders were Primonial (Sébastien Rogues/Matthieu Souben) in the Multi50s, Charal (Jérémie Beyou/Christopher Pratt) in the Imocas and Aïna Enfance & Avenir (Aymeric Chappellier/Pierre Leboucher) in Class40. Tip & Shaft looks at the weather strategies chosen by the sailors with three routers, Christian Dumard, Jean-Yves Bernot and Dominic Vittet.

The favourites in Multi50 in the Transat Jacques Vabre (see our article), Thibaut Vauchel-Camus and Frédéric Duthil (Solidaires en peloton ARSEP) took the lead from the outset with a southerly option , which was followed by their two rivals, Sébastien Rogues/Matthieu Souben (Primonial) and Gilles Lamiré/Antoine Carpentier (Groupe GCA/Mille et un sourires). The situation changed on Thursday with an easterly option as they approached the Canaries, which did not favour the leaders.

“They thought that by sailing down via the east, they would pick up strong trade winds between the Canaries and the coast of Morocco. They were looking for more wind, while the others aimed to get a better angle on the edge of the ridge of high pressure, even if that meant less wind. It was the choice along the ridge that paid off. For that to work out, the others needed to be stuck in light airs, but that wasn’t the case,” was the analysis from Jean-Yves Bernot. “Gilles Lamiré and Sébastien Rogues took a short cut taking advantage of the wind shift and that worked out, because they were not really halted at all. They should have a lead of around 60 miles when they come together again after the Canaries,” added Christian Dumard, who is working for Groupe GCA-Mille et un sourires.

However, the three routers believe that this gap is far from being the end of the matter for Solidaires en peloton ARSEP, who is a bit faster than her two rivals in their opinion. “Normally, the number and quality of the boats in the fleet would encourage you to push the boats that much harder, but as there are only three here, Thibaut may have thought that it was worth looking after his boat and avoiding any damage before entering the trade wind and getting the most out of her. I think they will step up the pace in the trade winds,” said Dominic Vittet. “In a day or two from now, they will all be back together again, which is good as that means it is all to play for. For the time being, they need to determine where to enter the Doldrums between 27 and 30° West. At the moment they don’t look that active, but the five-day forecast is like crystal ball gazing. So I think they will aim for the middle and then choose more precisely whether to go further east or west,” concluded Jean-Yves Bernot.

Imoca: the westerly option is over

While the Multi50s tended to follow more or less the same route, it was a very different situation for the Imocas with two radically opposed alternatives, with some going west to try to pick up the wind shift to the NW (Hugo Boss, Maître CoQ, Advens for Cybersecurity, Malizia, Bureau Vallée), while others sailed along the coast of Portugal hoping that the ridge of high pressure would not block their path too much (Charal, Apivia, PRB, Banque Populaire, 11th Hour Racing, Initiatives Cœur…).

In the end, its is clear that the southerners got it right, but their choice was far from being certain, according to our three routers: “At the start in Le Havre, the choice was wide open,” confirmed Dominic Vittet. Several elements needed to be taken into account when coming to a decision: there were the purely strategic considerations, but they also had to think about the boat and equipment. I think that some boats such as the brand new foilers and those that needed to clock up the miles, preferred the southerly route to look after their boat, while others going for the westerly option showed their fighting spirit. There were however, two new foilers, Hugo Boss and Advens, who willingly went for those trickier conditions,” commented Dominic Vittet, which is something that surprised Jean-Yves Bernot: “I would not have gone off on that westerly option aboard a brand new boat. I would have stuck with the others to see how I was doing and how the boat measured up.”

Christian Dumard added: “Alex Thomson is used to taking this westerly option. Maybe he wanted to really test his new boat. He will certainly have learnt something useful.” The latter was however less surprised with the decision taken by Bestaven-Jourdain on Maître CoQ: “At the start it was really 50/50 and Yannick has a boat that is really fast in such harsh consitions. It is always easy to criticise people once you have seen the outcome, but he had a lot of good reasons for going that way and in fact, performed very well, as he was leading this group.”

What gave the advantage to the southerners? “The westerly option became like the Northern face: the low remained out to the west, and it would have cost a lot to get all the way around it. Those who had gone south encountered a ridge of high pressure that was not as difficult as forecast and were not really slowed down,” explained Jean-Yves Bernot. “What looked like a narrow opening became the gateway,” added Christian Dumard. In the end, there should be around 250 miles between those who went west and the leading boats, Charal and Apivia.

On Thursday, they managed to pick up the trade winds and extend their lead (by between 50 and 80 miles). “The conditions are fairly favourable for the foilers, and I don’t think it is down just to the weather strategy, even if Charal played it a bit better than the others by heading further west to take advantage of the wind shift,” explained Christian Dumard. For Dominic Vittet, “the new foilers are faster even downwind, and we saw that Charal, after  a disappointing start from Etretat, quickly got back into the game in the Channel in downwind conditions. The ‘gulls’ cannot keep up with the ‘albatrosses’.

Just as two years ago, the race promises to be exciting until the finish in Class40 with the pacemakers right now being six boats (Aïna Enfance & Avenir, Crosscall Chamonix Mont Blanc, Made in Midi, Leyton, Crédit Mutuel , Linkt) spread laterally on the the Portuguese coast, but in reality there is really very little between them according to Christian Dumard: “It’s really open, when the first six will finish I think there will be nothing in it “.

Our three routers highlight the good start to the race of Kito de Pavant and Achille Nebout who, on a less powerful boat (the Class40 Jean Galfione a 2013 Humphreys design that the duo took on as a replacement after the dismasting of Made in Midi before the start “It’s interesting because Kito had already took this southern option on the Route du Rhum, the ‘southerner’ is still trying to win by going south!” He made his choice soon enough ” , analyzes Dominic Vittet, who is echoed by Jean-Yves Bernot: “Kito has taken his early option, no doubt related to the fact that as he doesn’t really know the boat that well and it’s not his then does not want to break it.”

Jean Yves is surprised by the choice of the course to the west of Ian Lipinski / Adrien Hardy on the new Crédit Mutuel: “I did not understand, I would not have separated away, least of all with a new boat they need to see their strengths against the others and benchmark themselves”. But Christian Dumard highlights the potential of the David Raison design: “They had the courage to go on this option, and I think they handled their return from the west very well, which means that the boat has potential and I think that the conditions soon will be good for them….”