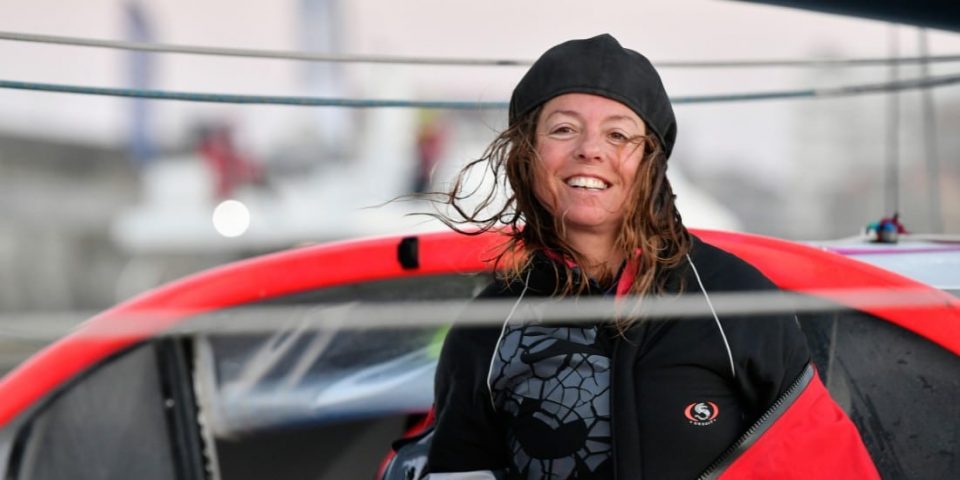 In fact almost all of the 2020 Vendée Globe competitors have already announced their plans to participate in the next edition but the next Vendée Globe is not for Alexia Barrier. 24th on the last solo round the world race aboard TSE 4Myplanet, at first she certainly thought of doing it again before coming up against the extremely tight second-hand IMOCA market (see our article), which required her to able to find and mobilize funds very quickly.

So she has launched The Famous Project, which she does not consider as her fallback solution: “My first idea was to go around the world again and I really needed a good reason to not go for it. But since I was a youngster the Jules Verne Trophy has also been on my bucket list, so I have decided to follow my instincts.”

The concept of a round the world record attempt with an exclusively female crew is, of course, not new. The first attempt on the catamaran Royal Sun Alliance led by Tracy Edwards in 1998 ended with a dismasting in the Pacific. She did help form a whole generation of female sailors (Sam Davies, Emma Richards, Miranda Merron, etc.). And that was followed up with a team led by Ellen MacArthur leading a mixed crew on Kingfisher II, early in 2003, the challenge also ending in dismasting. Since then Dona Bertarelli on Spindrift 2 (now Sails of Change) has been the only woman to have tackled the Jules Verne.

Putting together the skills

The announcement of The Famous Project did not take long to receive the support of several female skippers: Marie Riou and Marie Tabarly immediately came forward to join the crew, as did the Irishwoman Joan Mulloy, the American Sarah Hastreiter and British sailor Dee Caffari, who told Tip & Shaft: “Alexia’s project is strong because it is unique and it fills a big void in terms of the position of women in multihull offshore racing. She has the intelligence to want to bring together skills and she has the qualities to create a great dynamic.”Caffari is paired up with Shirley Robertson on the British double-handed IRC circuit (see our interview above), but the six times round the world sailor would in any case see The Famous Project as complementing her program: “These projects are long term and it is good that everyone has their own activities as well on the side. It’s probably too early to know what we would all do on board. Personally, I want to bring my experience and work on building confidence. Confidence in these extreme boats really is the key.”

Idec Sport on the radar

This project is scheduled to be built over two stages, the acquisition of a MOD70 in 2022 to set up and train the crew and then the purchase of an Ultim in 2024 at the end of the first edition of the Ultim Solo World Tour 2023. Although Alexia Barrier admits a preference for Idec Sport, “a fantastic boat” and also holder of the Jules Verne Trophy (40 days 23 hours 30 minutes), she is open to all ideas: “One day or another all the different boats will be sold on.”The search for a MOD70 is well down the path, negotiations are “well under way” with an owner whom the sailor does not wish to name before the sale is concluded. According to other sources it is  PowerPlay, the ex Virbac-Paprec, owned and skippered by Peter Cunningham, who just took second second place on the Rorc Transatlantic Race. “These boats sell for around one million euros. That is five times less than a new Imoca and it allows you to go sailing straight away. We will take part in the Voiles de Saint Barth in April before bringing the boat from the Caribbean to the Mediterranean”, she explains.

The MOD70 will be used to select and train the crew on classics such as the Middle Sea Race and on a few records, including Marseille-Carthage. At the end of 2022, it will return to Gibraltar before heading to the start of the Rorc Transatlantic Race at the beginning of January 2023. The objective is then to reach the Pacific to try to beat the record held by the crew of Lionel Lemonchois on Gitana 13 between San Francisco and Yokohama (11 days).

The crew, scheduled to operate at 7, will be mixed for the first couple of years with sailors like Sidney Gavignet, Johnny Malbon, Brian Thompson or Paul Larsen, bringing their experience of high speed multihulls. “The ambition of the project is to be exclusively female on the Jules Verne Trophy, but, in the meantime, we are a mixed programme and we also received a lot of CVs from boys.“

Looking for 8 million over 4 years

All that remains now is to finance the project, Alexia Barrier is looking to a budget of 8 million euros over four years. She can already count on 350,000 euros annually from some of her Vendée Globe partners who have renewed their commitment, but meantime she will have to borrow to finance the purchase of the MOD70.Naming rights to the boat is available from one million euros per year while Barrier has not set herself a deadline to raise part of the funds. “There’s only one thing I don’t want, which is to move away from the team aspect. A potential sponsor has already asked me to line up for the Route du Rhum with the MOD70 and I refused.”

In the quest for sponsors PR and Marketing expert Anne Millet adds, “Alexia benefits from an incredible network which seems to be set in motion more vigorously than for a Vendée Globe. For a sponsor the interest of the Jules Verne is that you are free to go when you want and you are not racing in the shadow of 40 other boats.”