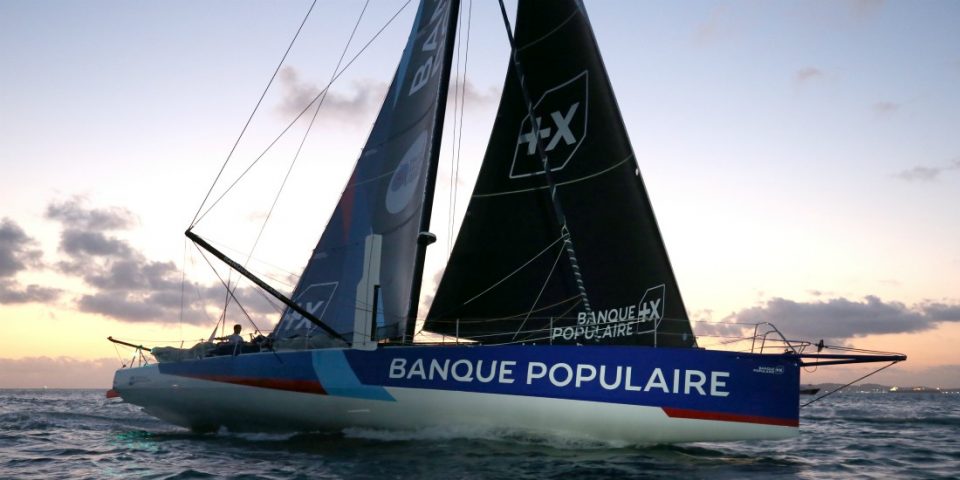 After a difficult end to 2018 with the loss of Banque Populaire IX in the  Route du Rhum, the 2019 season has been busy for Armel Le Cléac’h, with events in the  Figaro and Imoca circuits, ending up with tenth place in the Solitaire and sixth in the Transat Jacques Vabre with Clarisse Crémer. Not forgetting the work being done with the Banque Populaire Team on the future Ultim (due to be launched in the first quarter of 2021, as they observe what is happening in the Brest Atlantiques. The skipper from St. Pol de Léon talks to Tip & Shaft about everything that is going on.

You returned to the Figaro circuit this year and finished tenth in the Solitaire. How do you feel about the season?
It was satisfactory. It’s true that tenth place is not quite what I was hoping for in the Solitaire, but with the arrival of the new boat, I knew there were a lot of uncertainties and the outcome would be unusual. Having said that, it wasn’t a poor result. I left a few of the older guys who had returned to the race behind me. When we took the decision to return to the Figaro circuit, I gave myself two seasons to try to win a major race. That will be my goal next year with the Transat AG2R and the Solitaire. I think I needed to be there in this first season, as that will mean I can work on the details during the winter.

What sort of co-skipper are you looking for to compete in the Transat AG2R LA Mondiale?
I’m in talks with two or three sailors and I haven’t yet decided. In terms of the type of sailor, it has to be someone I get on with and then a good downwind helmsman. In that point of sail, the boat reaches average speeds of 13-14 knots and peak speeds of 20 knots and you get very wet in those conditions. I need someone who is capable of carrying out watches every two hours at the helm in 25-30 knots winds from astern. And who shares my goal of getting a third win for me.

After the Figaro, you moved up to the Imoca as a tutor for Clarisse Crémer. Did you enjoy that?
I wasn’t sure how to tackle that. It was new to me and Clarisse and I didn’t know each other. I had to settle into the boat very quickly and in the Fastnet, which was soon upon us, she was more or less crewing for me under my orders. But gradually she got used to the boat and was able to sail more alone and when we got to the start of the Jacques Vabre, I no longer had to explain everything about the manoeuvres. In the race, I took care of strategy and weather, because that is what I wanted to do and the goal was that by the end of the transatlantic race, she would have learnt enough about the boat to sail her back alone without any worries, which is what she is doing. So in the end, I had a nice job and I really enjoyed it.

You finished sixth in the Transat Jacques Vabre, and your boat was the first with daggerboards to finish. It looks like you know exactly what you are doing aboard the boat?
It’s true that we performed fairly well. I wasn’t sure where we would end up. I thought maybe we would get wiped out by the foilers, but in the end with some fairly tricky weather conditions, we didn’t come off too badly and I certainly wasn’t bored. It’s true that I settled back into IMOCA racing very quickly. The boat is not as complicated to deal with as the new foilers. At the start of the Jacques Vabre, the boat was a bit like a musical instrument for me and I felt that I knew the score more or less by heart.

Do you have any regrets about not taking part in the 2020 Vendée Globe?
No, I don’t have any regrets. This little interlude pleased me, but in the Vendée Globe when you are aiming to win, it’s a different story… The Vendée is a chapter in my life that for the moment is closed. We’ll see in the future, but for now, I really can’t wait to see our Ultim when the first boats are finishing the Vendée Globe.

How do you feel about the new Imocas, and particularly the latest one, L’Occitane, which was presented to us this week by Armel Tripon?
It’s great to see the different approaches, as that wasn’t the case in the last few Vendée Globe races. Today, Charal is that bit above the rest, but Apivia is up there too, Advens was a nice surprise in the Jacques Vabre. As for Armel’s, when you look at what Ian Lipinski and Adrien Hardy did in the Jacques Vabre with a boat based around a similar concept, we could say that she may not be the prettiest Imoca, may that she will perform well, which is after all the priority. I can’t wait to see my friend Nicolas (Troussel)’s boat, which has the same hull shape as Arkéa-Paprec, but with changes made to the foils.

If you had to choose one, which would it be?
In general, I prefer boats that perform well all round, so it would be a mix of Charal, which does well in a wide range of conditions, and Apivia for her cockpit.

What do you think about Hugo Boss and do you see Alex Thomson as a potential winner of the Vendée Globe ?
I think he is one of the favourites in the Vendée. This time, he wasn’t lucky, but for some short periods, we saw average and peak speeds that were very high. The boat has a lot of potential, and is fairly similar to Charal, even if they were more extreme in terms of the cockpit and foils, which is a trend they are known for. I think they will be able to bounce back quickly.

Moving onto the Ultim class, even if the Brest Atlantiques is not yet over, what lessons have you learnt so far?
Even if the boats have had some small problems, I think that structurally, they have withstood the shock. I hope that will be the case all the way to the finish. That was really the goal after the Route du Rhum. On top of that, they have had some nasty conditions, so it is reassuring in the context of round the world sailing for the years to come. As for their performance, we have seen that the two boats that got ahead with their preparation and controlling how they fly have done better. It is a shame that Sodebo has retired, as in lighter downwind conditions in the South Atlantic, they could have recovered. What is positive is that up until the Cape of Good Hope, there was a real competition including with Actual Leader. In any case, for the teams, this race will have taught them a lot for the future. Last week, for example we had a big meeting to try to find solutions to prevent collisions with UFOs causing as much damage as we have seen.

Are there any solutions to cope with these random incidents?
There are several things. Firstly, maybe sometimes the damage happened too quickly. Some boats didn’t have those problems. Was it because they had a different approach to the structure of the appendages? It is only natural that we wonder about that. It was also the case for our older boats, Idec (ex Banque Populaire VII), which made it to Mauritius without any damage to the appendages, but also Spindrift (ex Banque Populaire V) last year, even if they were forced to retire from the Jules Verne with other problems. We are working with other teams on UFO detection systems, in particular with Oscar camera, which is already being used on a lot of boats. At the moment, we’re in a trial phase recording data to help them develop the system; we hope that ultimately, it may work. We also need to examine the matter of how to finish a race and perform well even when handicapped, as we saw with Alex Thomson in the last Vendée Globe.

If I understand what you mean, Brest Atlantiques will influence some of the choices on Banque Populaire XI, in particular concerning the appendages?
Exactly. Today, the design of the appendages is not yet finalised, so everything we see in this race, the damage, performance levels, the drone videos… all that will help us, particularly as until now, we didn’t have much information to work on, as flying boats are a fairly new phenomenon.

The Maxi Edmond de Rothschild is the reference for the fleet today, isn’t she?
Yes, they are able to fly and to sail quickly in almost every point of sail. She is the reference and is the model which inspired us when defining the specifications for Banque Populaire XI.

What will Banque Populaire XI look like in comparison to IX?
She won’t be radically different; they both have the same spirit and we haven’t gone for an unusual boat. We have stayed with the classic cockpit and didn’t go down the same road as Sodebo. But we did a lot of work on the aerodynamics and on the appendages, which today are clearly the engine for the boat. So I would say she is a bit like the latest version of the iPhone – an improved version of the previous one.