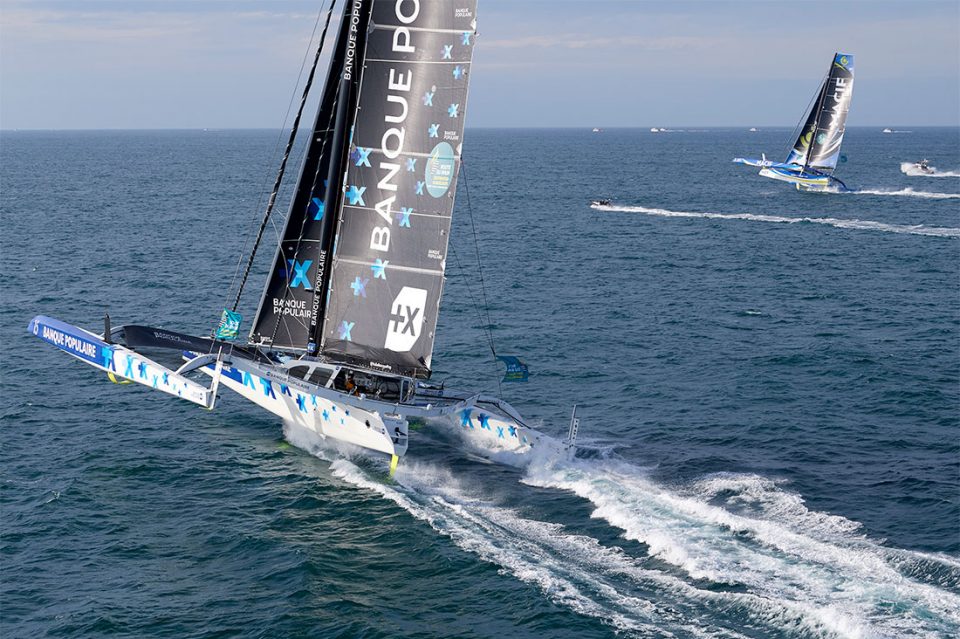 Their programme was expected to be published at the end of January (see our article) but in fact the calendar for the Ultim 32/23 class for the period 2019-2023 should finally be unveiled in mid-March. The members have had to get back around the table after the Transat Jacques-Vabre refused to modify their notice of race and let the giants in. Tip & Shaft tells you more.

It was, of course the Route du Rhum-Destination Guadeloupe which turned everything upside down. Until the ill fated Ultime solo race from Saint Malo to Guadeloupe took its toll, the 2019 Ultim 32/23 programme should have peaked at the end of December with Brest Oceans race, the first ever solo non-stop multihull race round the world race. But the damage suffered by Banque Populaire IX (a total loss), Edmond de Rothschild and Macif and, to a lesser extent, Sodebo, threw the cards back into the air.

And so on December 5th the organizers were forced to to announce the postponement of the round the world race, two weeks after that the postponement of the Lorient-Bermuda. To all intents and purposes the Transat Jacques Vabre seemed to offer a solution to what would otherwise be a year with no major event for the high value, high speed Ultimes.

Mixed Messages?
The organizers did say from the start they were not inclined to have the Ultimes in Le Havre in the Paul Vatine basin but once the question was formally asked by the class, discussions still  took place. On January 28th the Transat Jacques Vabre confirmed they are “not able to welcome the Ultim multihulls to race satisfactorily and safely “.
The Director General of the event, Gildas Gautier then told: “It is not a decision that we took lightly because we are a multi-classes race and it is never very pleasant to say no, but since 2017 we knew that we had to build our race without them because they were developing a program of round the world events in coinciding odd years.”

Even at that, the decision “was a real surprise” according to Yves Le Blévec: “Initially the signs seemed quite positive.” explains the skipper of Actual. “We were discussing issues relating to timings not to overshadow the other classes then it all went cold.”

Director General of the Ultim 32/23 class, Emmanuel Bachellerie adds: “We had discussed compromises, such as arriving in Le Havre later so as we did not disturb the other classes, a different start for example, an extended course, lots of ideas so to finally arrive at this decision is a great shame and something we don’t really understand that well. ”

He points out without naming them specifically that the Imoca class had pushed against the participation of the Ultims: “I think that there could have been a bit more solidarity between us all as sailors in different classes. When we prepared the start of the Brest Oceans, we had voluntarily agreed on the end of December as our start time, when we could very well have made the start during early November and run through the Christmas holidays but we chose not to so we did not subtract from the interest in the Jacques Vabre. ”

Now without the Brest Oceans or the Jacques Vabre in 2019, the opportunities may seem to open for Jules Verne Trophy attempts next winter, especially for a team like Macif, probably the best set up and ready, especially given the experience they have on the trimaran, setting out to go for the Idec Sport record. “The Jules Verne is a more specific approach than racing, what we need and want is to produce a program together and to compete together in a race or races “, explains Thomas Normand, Executive Director of MerConcept, François Gabart’s company .Yves Le Blévec adds: “I would have been unsettled by the choice of owners setting off to do their own program themselves (like a Jules Verne) just because there is no Brest Oceans or Jacques Vabre, that is not in this sense which we are building this class. ”

The class worked on alternative Plan Bs at the beginning of February in Val-Thorens where skippers, team-managers, boat owners and communication teams including the Gitana Team thrashed out future ideas.

The options on the table?
“There are some events that we can join but it was also shown by Nice UltiMed or Brest Oceans that we can create events of our own, we need to find the balance,” Emmanuel Bachellerie says. Yves Le Blévec is ambitious: “Since there will be no world tour in 2019, we must find something that is as stimulating and rewarding, the courses must be a match for our boats “. These courses, whatever they may prove to be, seem highly unlikely to be solo for the moment. Le Blevec concludes, “Following the Route du Rhum, solo racing is not really on the immediate agenda. ”

According to our information two different options have been proposed for this coming winter to Brest Métropole who have been in the discussions from the beginning: a double handed world tour (which the Gitana team does not want to participate in) or a big four-Ultims Atlantic loopthrough Rio and Cape Town. The first option has not yet been chosen and the second is under review.

For 2020 there is the chance to participate inThe Transat – for which the notice of race has not yet been released. But will the same thing happen as with Transat Jacques Vabre: will the organizer apply the same precedent or will they accept the maxi-trimarans when the bulk of the fleet will be composed of Imoca, Multi50 and Class40, the same as the Transat Jacques Vabre? Hervé Favre, co-CEO of OC Sport and in charge of sailing, did not wish to comment on this theory for the moment.

For the upcoming years, it seems more and more probable that the first crewed race around the world of Ultims will be in 2021, organized by ASO from Nice – ASO’s Jean-Baptiste Durier, when we contacted him, did not wish to confirm. The even years being dominated by the Vendée Globe with which the Ultim 32/23 class does not want to compete, and the Route du Rhum on the other, it is an unmissable event for large trimarans, the next available date for Brest Oceans is 2023.
So let us wait for the final announcement of the official calendar scheduled for mid-March, all in all the discussions are going well…