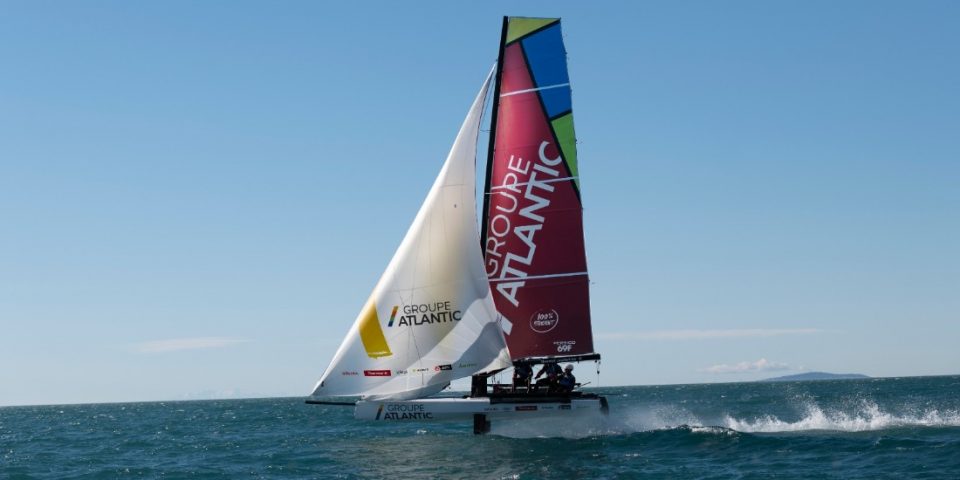 How french teams are turning to the 69F circuit

After a first full season in 2021, the 69F circuit, the foiling monohull circuit which was launched in 2019 by the Persico Marine yard, has just restarted with the Miami Grand Prix 1.1. The first event of 2022 was won by the Swiss crew from Team Tilt while Act 1 of the Youth Foiling Gold Cup was dominated by Team Argentina ahead of two French crews, Youth Foiling Team and Helvetia by Normandy Elite Team. Teams clearly see this circuit as a good opportunity to train in foiling. Tip & Shaft investigate.

Properly launched in 2021 after some test events in 2020, the 69F circuit is divided into two events: the 69F Cup and the Youth Foiling Gold Cup (YFGC) which is solely for sailors under the age of 25, these events taking place in the United States and in Europe. The first Act of the YFGC finished last week and mustered six teams, including two French teams for the first time, Youth Foiling Team, led by Charles Dorange, and Helvetia by Normandy Elite Team led by Clément Michel.

A third French team is set to compete during the European events. Racing in both the 69F Cup and in the YFGC will be Groupe Atlantic (Clément Cron) who were winners of last year’s Tour Voile in the Diam 24 od. Tactician Valentin Sipan – who at aged 27 will be replaced on the YFGC by Roxane Dubois – explains: “We wanted to try something other than the Diam [Groupe Atlantic had originally intended to also go with the Tour Voile which will ultimately not take place, Editor’s note], we went to Sardinia last fall to see what the 69F was about and we quickly got hooked. Firstly because we’re almost all in engineering school, so we were looking for a slightly more technological boat, and then also because if we want to try and get ourselves on the America’s Cup in future years then it would be a mistake not to be interested in this kind of boat which in essence is a bit of a miniature version of those in the Cup. It’s a way to get closer to Cup world.”

Normandy Elite Team aims to run two teams, a young and a female in the 69F Cup provided they find partners. It was the termination of the Tour Voile which led their sports director Cédric Chateau to look at the 69F circuit. But not only. He explains, “After the announcement of Normandy Events (see our article), we looked at the different circuits where we could take our partners to and to train up our young people. The advantage of the 69F is that it is an international circuit racing on the only foiling monohull that really exists so far. It allows young people and women to gain experience, knowing that the protocol for the next Cup provides for a young team and a female team [the Youth America’s Cup and the new Women’s America’s Cup will be raced in 2024 in the AC40, editor’s note]. The more young people we have who are already training, the more seasoned they will be in the event that selections are put in place. It also allows them to promote themselves and get ahead.“

The draft of the
America’s Cup

The objective is similar for the Youth Foiling Team, as explained by their Charles Dorange. “It’s a circuit that is really reflecting the future of sailing, and in particular regarding the America’s Cup. Foreign teams have also come together like the Dutch and the Italians of Young Azzurra. We know that the Youth America’s Cup will move to the AC40 in two years, the 69F is the class that can get us there.” analyzes the brother of Violette Dorange. Their crew also includes Thomas Proust, Pierre Boulbin and Lou Mourniac. The presence of a young woman on board is compulsory for YFGC events. “We also sail on the ETF26 which is a bit like the little brother of the F50, the idea for us is to be present on these two circuits to create a group of young people who train and race on foiling boats.”

The return of the Youth America’s Cup in 2024 is seen as a godsend by the Italian promoters of 69F. It will be raced in the AC40 of which the 69F is a very much as smaller version (6.90 meters against just over 12 meters) and simpler (no hydraulics). The 69F owners and organisers expect to see Cup teams arrive on the circuit. “It’s for certain ! The 69F is the only platform available on the market that allows young sailors to gain experience on a foiling monohull with three or four crew members”, explains to Tip & Shaft Zeno Casti, the marketing and communication manager of the 69F.

A boat which is
for sale or for rent

The circuit and the class also attract professional teams like the Swiss from Team Tilt, who will also debut in 2022 on the SailGP circuit and see the 69F as a good training platform. “The advantage of the 69F is that you don’t have to worry about logistics and technique, they take care of everything, you arrive and you sail, you spend a lot of time on the water,” comments Sébastien Schneiter, the skipper of the Swiss team. “As on SailGP, we are very limited in training and racing time, it allows us to work on specific points, in particular communication within the crew.”

The cost of a season on the circuit? Charles Dorange estimates at 50,000 euros to participate in the four Acts of the Youth Foiling Gold Cup 2022 – the registration fee is 5,000 euros per regatta. Pierre Mas, team manager of Groupe Atlantic, reckons on “200 to 300,000 euros“ for the entire project – YFGC and 69F Cup -, the team having bought their boat (195,000 euros excluding tax) . “We made this choice rather than renting for each event because it is a complex boat which requires a significant learning phase, so it is better to have it available full time. The 69F is quite expensive compared to the Diam [which only costs 50,000 euros], but it is a commitment over several seasons, which allows it to be amortized.”

Cédric Chateau and Charles Dorange are also thinking about buying as the preferred solution, provided they find the budget. They are looking at getting better on the foiler that, after a month of training near La Grande Motte, Valentin Sipan says,: “It’s a kind of small scooter, a nervous boat, quite easy in the transitions because anyone can fly it fast, but at the same time it is difficult to control when there is wind.” He adds: “We will have to spend hours doing good maneuvers and keeping good speed.”