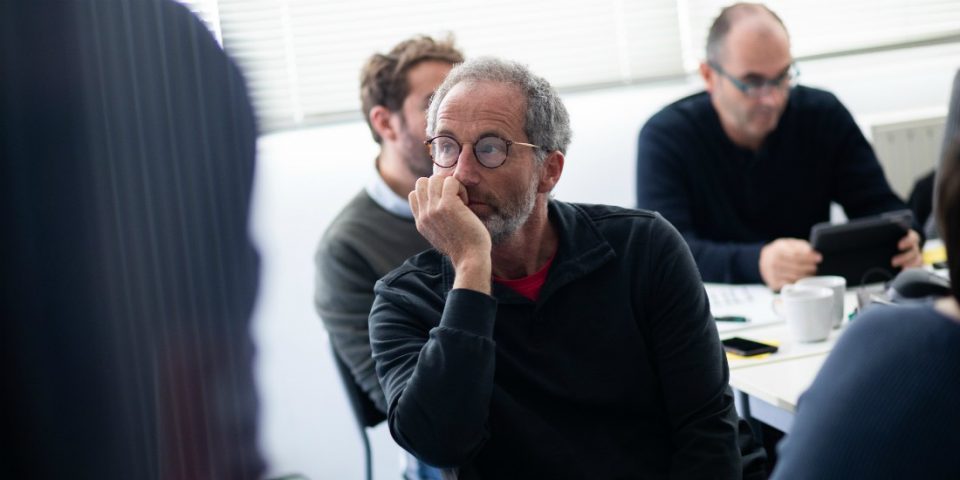 Michel Desjoyeaux: “Corum is probably the boat I have invested the most in”

The most recent boat in the IMOCA fleet, Corum L’Epargne was due to be launched on 21st March in Port-la-Forêt. Tip & Shaft talked to Michel Desjoyeaux, as with his company, Mer Agitée, he was the project manager for the construction of the Juan Kouyoumdjian designed boat.

Nicolas Troussel said in an interview with Le Télégramme that “having Juan Kouyoumdjian as designer and Michel Desjoyeaux as project manager, it’s absolutely mad.”  Wasn’t the Corum L’Epargne project itself crazy?
I’d like to thank Nicolas for his kind words. It’s true that it was a great opportunity for all of us to work together. We’d be moving around Juan for some time and started to work together with Iker Martinez and Xabi Fernandez to build an Imoca after the Barcelona World Race that they raced on one of my old boats [the former Foncia, winner of the 2008 Vendée Globe, which is now in the hands of Jean Le Cam, editor’s note], but the project never worked out. It’s true that this was a rather special project, as building this highly original boat was a huge challenge for Mer Agitée. For me, it was an opportunity to apply everything I learnt from my five previous Imocas, without giving it my all, as I was not the skipper. Having said that, Corum is probably the boat I have invested the most in.

Why do you say that?
Contrary to my previous boats which I managed as the overall director and fitted the systems, with this boat, we were more or less the assembler, which changes everything. We didn’t make many parts, but we stitched her together, which is usually done in the construction yard. That wasn’t possible for Corum due to a lack of space in the yards in the time frame we were looking at, so that I suggested to Nicolas and his team that we would go further and carry out the assembly work. That didn’t worry us, as it is true we had not done that before with an Imoca, but we did do it with our Z catamaran, which was built along the same lines in our yard. So we knew what we had to do. What I mean is we did a lot more and for the past few months, I have been in the yard every day and often with my hands in the glue.

The lack of yards was something we talked about in our last issue when looking at Class40. Could it lead you to transform Mer Agitée into a full time yard with all the equipment that entails?
Yes and no. Yes, to be able to do what we have done with this project with Corum, that is fitting everything together and assembling the major parts built in yards that have the big ovens, baking machines, laminating and cutting gear. No, because we should stick with what we know how to do and not want to grab other people’s work. There are some huge investments around here in Port-la-Foret and in Lorient (CDK), as well as in Vannes (Multiplast). Everyone has their job.

Could you make Class40 boats?
The advantage of Class40, is that there aren’t the same requirements I just talked about, so in fact, we would be able to deal with them, as we have a decent work area for that.

Returning to Corum, you say you were present in the design phase. What influence did you have on the final outcome?
I left my mark everywhere and nowhere. This is Nicolas Troussel’s boat, not Michel Desjoyeaux’s. Let’s get that clear. But it was more in the area of deck hardware and ease of handling that I intervened. We came up with some solutions to have a cockpit that I think will work well when sailing.

At the start of our interview you talked about an original boat. I have heard you say that she will be like a rocket. Can you tell us more?
In any case, I haven’t yet seen a boat like her in terms of how she was thought out. It’s not a revolution, but she will stand out a bit on the pontoon.

Are you talking about the coach roof?
Yes, the main change in comparison to boats from previous generations is that there is not really a coach roof. That is what makes these boats so original. But that was not done to make her original. The idea was to enable her to fit in with class rules [in particular the 180 degree digital righting test, editor’s note] in a different way from the others. What I mean is that if you try to lower the centre of gravity and you design a boat that is low in the water, she is very unstable at high angles, as there is very little volume high up, or on the contrary, you raise the volumes up and consequently you have a lot of weight at the bottom of the keel. To be more detailed, before the arrival of foils, the greater the weight at the bottom of the keel, the stiffer the boat, so the more sail you could hoist and the faster you would be. With the foils, the transversal stability no longer comes from the keel but the foil, so there is no point in having a heavy keel. In simple terms it is like that. In any case that is the reasoning.

The class will shortly be looking at the next set of rules. Are you in favour of foils on the rudders that some people want?
You are preaching to the converted. Once you accept foils, and so fly, to be stable you need three legs. You can have two when you regulate the power all the time, as on the AC75, as there are a lot of people there to turn the handles and regulate the transversal stability. When sailing solo, it seems vital to me to have a third leg on the footstool. We didn’t want to do it with the pretext that it cost a lot, but today on foilers, you have a one-design mast that isn’t resistant enough to cope with the foils, as you have to have a mountain of instruments to control them to avoid damage. In the end, you realise that that costs more than if they had authorised rudder foils from the start. When you realise that the limits that have been set are of no use, you have to talk about them again.

What do you think about the new generation of foilers?
We can see that the foils are bigger and bigger. With our foils out, we are 13 m wide or two more than the tips of the outriggers, so that gives you an idea of the size. That doesn’t make logistics in the harbour any easier. I can’t wait to see version 2 of the foils, particularly on Charal. Will they be moving toward the others or will the opposite happen remembering that so far, she has achieved the best speeds with some very interesting compromises. Unfortunately, we didn’t see much of Alex Thomson in the Transat Jacques Vabre, but he was the only one with curved foils. It’s clear that there has to be a compromise between a boat designed for VMG and a boat that performs well all round. I think we will get the answer to that after the Vendée, and not before.

If you were going to compete in the Vendée Globe, what would your choice have been?
I think I would have gone for curved foils. Not because Alex Thomson has them, but because they are the only ones that can be drawn in enough to be raised up at times in the Southern Ocean, allowing you to keep up high average speeds without being forced to be ready to intervene all the time at high speed. I do wonder how some will cope in the Southern Ocean when they don’t want to accelerate too much. I can’t really imagine how foilers that are able to fly will behave in very heavy seas. Having said that, you could say that if they manage to be sufficiently fast in 15-20 knots, 25 max, they can stay ahead of the low-pressure systems and remain downwind in fairly decent seas, but I don’t really know. At some point, the difference will be felt by the skipper.

Armel Le Cléac’h took 74 days to sail around the world in the previous Vendée Globe. How long will it take the new foilers?
A boat that manages to complete the Vendée without any problems will take less than 68 days. But they have to finish without having had any problems…

To finish, we would like you to say who you think will win the next Vendée Globe?
I’m going to be kind. I’d say a black boat…