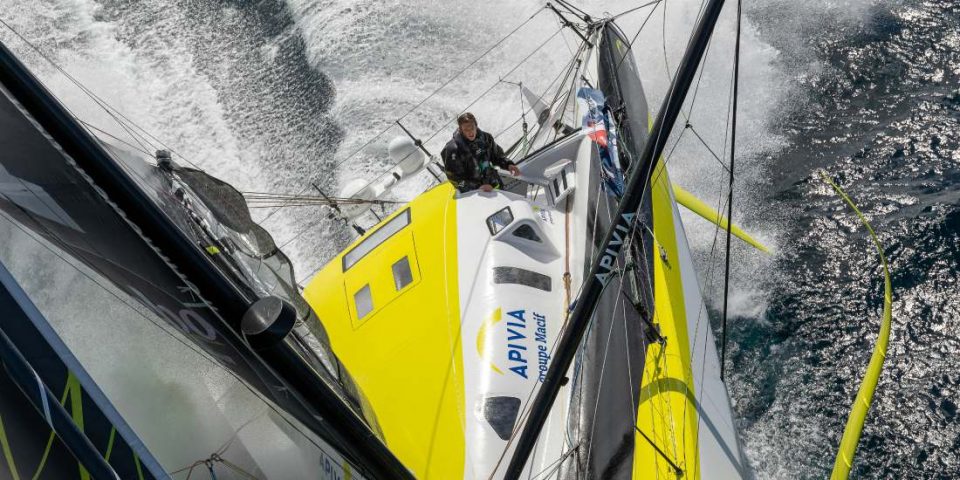 Charlie Dalin: “I feel I have a fairly complete game”

The last preparatory practice race before Vendée Globe organized by the pole Finistère race off Port-la-Forêt ended last Thursday. Charlie Dalin was out there in the mix and, at a month before the start of the ninth Vendée Globe it was the ideal opportunity to catch up with the skipper of Apivia, one of the favourites for the solo round the world race.

Do you feel like you have done everything you wanted to do to prepare for this Vendée Globe?
Yes, I’m happy with the level of preparation that we have reached, the goal when we set out at the  launch, before the health crisis, was to have racked up 24,000 miles before the Vendée Globe, so the equivalent to a lap of the world. With the two Transats canceled (The Transat CIC and New York-Vendée), we are shy by about 3,000 miles, but in the end I don’t really feel that impacted on my preparation and I feel fully confident to head to the Southern Ocean with Apivia.

What do you fear about the Vendée Globe?
What I dread but what also attracts me at the same time, are the speeds that we reach on these boats. If the conditions are good and the sea is not too rough, I will not be surprised to exceed 600 miles in 24 hours. That is achievable with this new generation. But beyond that the challenge is to hold on to these speeds for long periods. Certainly the boats go faster, but it will still be a long race, around 70 days, maybe less, but we, the sailors, will have to live with the ferocity of it all because life will be very hard on board.

And how do you prepare for the shocks, the crashing and the motion?
These high speeds for days and days on end is the big unknown. Today we reach these speeds regularly – like even late yesterday (Wednesday) we were at 30 knots – but at the time for a few minutes, or even hours, but never really to the level of days and days. But it is not really new. I had seen this before watching the videos of the boats on the last race in 2012 when even then there had been a big jump since 2012. Even so I don’t think some teams last time had taken this into account enough, so we have been aware of it, and it is something that I wanted to take into account for the Apivia design. Hence the reason I pushed to have a closed cockpit. I wanted to be protected as much as possible from the wind and waves. Yesterday we had up to 26 knots of wind and I was in a T-shirt under the roof. It’s a huge comfort to have this cockpit that I can totally close up. Then, in terms of interior ergonomics, we have spent a lot of time and resources testing things: we did many tests with seats, ottomans, mattresses, and even on the last outing, we still made tests, to the point that we have a new version of my main seat which is being made.

Will it be the one who will manage to endure these conditions the longest that will make the difference?
What’s more important is to have the power under the hood to speed up when you need to. It’s a bit like riding a bike, if the peloton decides to roll, you have to have the power to roll with it, because the risk, if you can’t keep up, it’s getting left behind. This time you can quickly lose hundreds of miles. But after that I think as humans we can be able to adapt to the conditions in which we are living. If I think back to the Vendée-Arctic, we had fast upwind off Ireland, at the end of this phase, I had the impression that the shocks had become part and parcel of life then. And I think you can anticipate ahead, I have the impression of having unconsciously recorded the moments when these conditions will arrive. After that, it really depends on the state of the sea. Yesterday for example, we were making 25 knots on the way back from Groix, the orientation of the waves was OK, it was totally bearable. The discomfort is directly related to the state of the sea when you are at speed.

If I tell you that you are one of the favourites with Jérémie Beyou, Thomas Ruyant and Alex Thomson, how do you feel?
I’m really attracted to competition, that’s what thrills me. That is what it is about. The goal, which I feel I have achieved, has always been that once the boat is moored in the port of Les Sables d’Olonne, to be in the position of being able to go for a victory. The project has always been ambitious and I was lucky that Apivia trusted me to go for it on this new boat. Today I feel like we are not missing a lot of cards. One that I maybe miss compared to  people like Jérémie, Thomas or Alex, is to not have Vendée Globe experience. But other than that, I feel like I have a fairly complete game.

What do you believe is your trump card?
The fact that I became involved from the first days of the design stage. Apivia corresponds to what I was looking for and to my way of sailing. I brought together all the knowledge I had acquired. She easily achieves high average speeds, is stable and able to keep up those speeds when conditions change a bit. That means I don’t have to spend all my time trimming the sheets. In addition to that, I don’t believe she has any weak points of sail.

“To be safe, you really need to have a huge lead”
Is there one part of the course for the Vendée Globe that will be the decider?
The sail down the Atlantic is a key moment, as you have to be in the right place when you start to tackle the Southern Ocean. Apart from that, we can see that the speed differentials depending on the weather conditions are so big that you can never be certain about what will happen. You can close huge gaps in the snap of your fingers… In the Vendée-Arctic, at one point, Jérémie did better than me coming out of a ridge of high pressure and was seven miles ahead: for someone who is used to sailing a Figaro like me, that appears to be a gap you simply cannot close, but in the end with the new wind arriving, I recovered those seven miles in three-quarters of an hour… What that means is that if you want to feel safe, you really need to be a long way ahead.

Did you think a lot about the design of Apivia for this trip down the Atlantic?
Yes, when it was time to come to a decision, that question regularly surfaced. “That is fine, but does it really help us on the way down through the Atlantic?” We carried out a lot of weather studies about the conditions on the way down in order to make the right choices. The priority was making sure the boat performed well when reaching, as there is a lot of that on the trip down through the Atlantic.

Were the most recent changes you made this summer (cutaway forefoot) linked to that?
That was more a matter of enhancing VMG performance sailing downwind. That was a question we had filed away at the end of the Transat Jacques Vabre that we didn’t have time to deal with during the winter refit. So, we did it this summer and I’m really pleased with the modifications. I feel the VMG performance of the boat downwind has improved considerably.

What would make this Vendée Globe a success for you?
Crossing the finishing line and getting a good result. One of my dreams is to surf along on a front for several days on flat calm seas. I have been dreaming of that for a long time and hope that we will encounter conditions to allow me to do that.