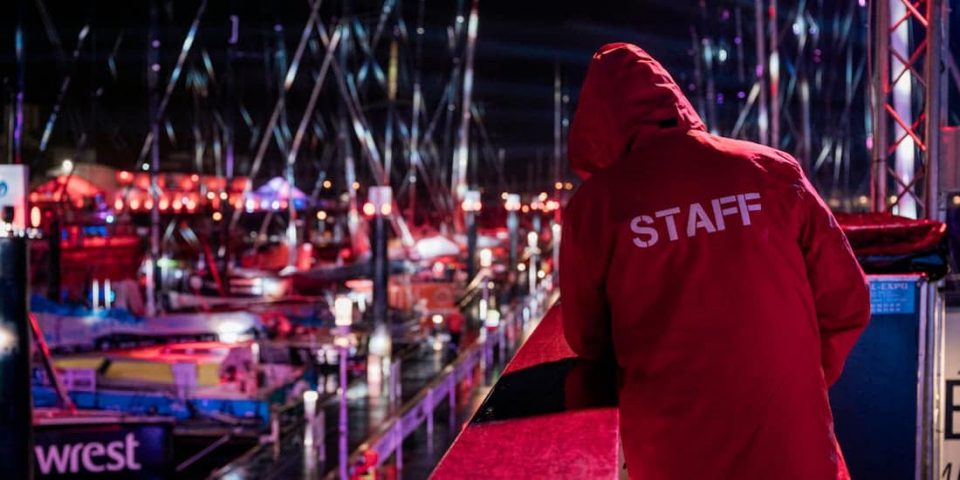 The 2020 Vendée Globe is due to start ‘behind closed doors’ with no local public audience on Sunday November 8 at 1:02 p.m local time in Les Sables d’Olonne. Despite the context, this ninth edition is a record breaker on many different fronts with 33 participants and a budget of 16 million euros (against 12.3 in 2016). Tip & Shaft has analyzed the budget for the Vendée Globe.

10.5 MILLION EUROS FOR HISTORIC PARTNERS
An exceptional race means an exceptional budget. Asked on September 21 by Tip & Shaft during the Vendée Globe presentation press conference, Yves Auvinet, President of SAEM Vendée, the semi-public company that organizes the round the world race confirmed a budget of 16 million euros excluding tax over the four years. The historical partners of the event cover 2/3rds of this sum: the departmental council of Vendée puts in 4.3 million, Sodebo 4 million, the town of Les Sables d’Olonne 1.5 million, and the Pays de la Loire region 666,000 euros, so nearly 10.5 million euros between them. “The remainder [a little less than 6 million, Editor’s note] is provided by complementary partners and by the revenues made in the village“, Auvinet told us.

2.5 MILLION EUROS FROM COMPLEMENTARY PRIVATE PARTNERS
Other private sponsors are on board with lower levels of investment. Contacted again this week, Yves Auvinet estimates that the share of “complementary” private partnerships represents a total of 2.5 million euros. To raise this sum, a hierarchy of partnerships has been established with three distinct levels:” official partner”, alongside the town of Les Sables d’Olonne and the Pays de la Loire region (starting at 1 million euros); “official supplier” (minimum 250,000 euros) and “technical suppliers” (from 50,000 euros).

The outcome? “Given the context, with a Covid period occurring at a time when, in general, the discussions were being finalized, that’s not too bad,” said Antoine Robin who with his company Come Together took part to this job. “Some Sectors have not been able to invest at all to the level we could expect, but there are many more brands among technical suppliers, 29 in total, it’s a good outcome [they were 13 in 2016, Editor’s note] .”

The level of official partner, on the other hand, was not realised. “For a large brand, it was the only really interesting level of partnership but it was very expensive compared to what was offered,” said one observer in this market. “There are undoubtedly adjustments to be made so that we can have one or two good official partners,” confirms Antoine Robin.

As for the official suppliers, the only newcomer, next to Eoliennes en Mer Iles d’Yeu and Noirmoutier, Highfield and CLS, is Ulysse Nardin, official timekeeper, for an amount that the watch brand, requested, did not wished communicated (but billed as a minimum of 250,000 euros depending on the pyramid of partnerships).

The commitment of the three other official suppliers depends on the nature of their activity. If Eoliennes en Mer Iles d’Yeu and Noirmoutier provides cash – the company, whose investment four years ago was 500,000 euros also not wanted to disclose the amount of its commitment. CLS provides a service (detection of ice by satellite), for an amount of 360,000 euros excluding tax. Highfield, for its part, is making 48 RIBs available to the organization on a partnership model similar to that of 2016, namely a merchandise contribution of 450,000 euros and approximately 50,000 euros in cash. “That’s the value of the partnership in the end, but Highfield’s commitment is much bigger because we fund the 48 boats and their operation for over a year to be able to make them available to the organization, that is a commitment [covered by the resale of the boats, Editor’s note] which costs us between 2.5 and 2.8 million”, estimates Brice Lavirotte, marketing and communication manager of Highfield France.

100 TO 150 K € FOR THE SME PARTNERS CLUB
For this edition the SAEM Vendée has also launched a “Club VG2020” tailored to small to medium sized businesses with four offers: 2,500, 4,000, 5,500 and 7,000 euros excluding tax. “The objective is to make the hospitality village accessible to the local economic players, to introduce it to the world of competitive sailing and to make companies aware of environmental and social issues. In return for their membership, we offer communication tools, the possibility of inviting people to the village, and to events and conferences”, explains Fabrice Garandeau, in charge of the club.
In total, 29 companies have joined this club for a total sum of “between 100,000 and 150,000 euros”, estimates Fabrice Garandeau. He addds: “The result is not the most important thing today, it will perhaps generate 1.5 million the next time, the idea was to start something with a strong commitment from the members, some of whom , may one day step up to the pyramid of partners.”

3 MILLION EUROS COMING IN FROM THE VILLAGE
As a final component of income, the village income was initially estimated at 3 million euros: that is from space rentals for partners and exhibitors (54 this year), operating income, etc. That figure will certainly be revised downwards after the early closure of the village on Thursday.

EXPENDITURE UNDER CONTROL
On the expenditure side, the SAEM Vendée does not yet wish to go into details: “We are not communicating the figures for the moment because we are on a special edition,” replied Laura Le Goff, general manager of the organizing structure. According to Yves Auvinet, the additional cost linked to the pandemic (disinfection equipment, cleaning, checks, etc.) amounts to 300,000 euros. The Covid-19 pandemic will results in costs and savings made necessary by the closure of the village and the cancellation of all public relations operations until the departure. “We set up for an open village throughout the race, we are not necessarily going to maintain all our structures, we have to be very vigilant to avoid anything that could be unnecessary expenses“, confirms the president of SAEM Vendée.

The major items of expenditure are shared between the sports part, communication – in the broad sense – and the village. In all, 80 service providers are involved in the event, chosen following calls for tenders launched between 2017 and 2020. Among these, according to the award notices that Tip & Shaft consulted, the race management was entrusted to Jacques Caraës (via Kaori, the communication agency of which he is the manager) for an amount of 488,239 euros.

The press relations and influence strategy contract was awarded to the OConnection agency for 251,500 euros, while the photo service was won by Alea (174,000 euros), editorial and digital communication by Addviso (600 000 euros) which also takes care of the management / maintenance / hosting part of the site and mobile applications (300,000 euros). Finally, the visual identity went to Designe (Nicolas Gilles) for 100,000 euros, while “the optimization of audiovisual broadcasting and technical services allowing audiovisual production linked to the Vendée Globe”, is distributed, for a total of 1,7 million euros, between Nefertiti, 6e Sens and Amaury Sport Organisation.

Will the budget for this particular Vendée Globe balance? “The aim is to balance it, we will have to fight to get there, though the measures we are required to take in the context of the pandemic are weighing down the budget a little, but we will only find out at the end of this edition”, Yves Auvinet replied in September.