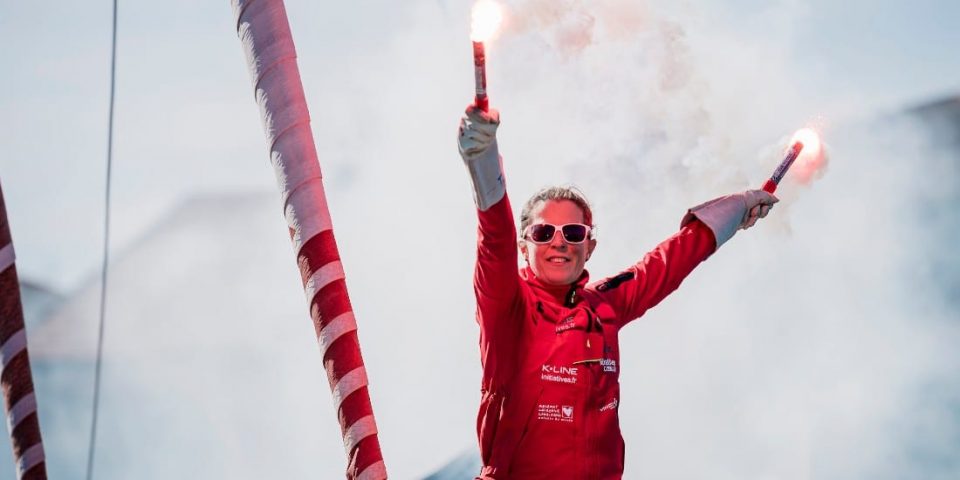 Two months after her return (out of the race) from the Vendée Globe, Sam Davies is now on course for the Transat Jacques Vabre, for which she should soon announce the “experienced co-skipper” who will sail with her on Initiatives Coeur. Tip & Shaft took this opportunity to chat things over with the British skipper who is determined to set out on a Vendée Globe campaign once again.

Ten months after your arrival, what are your thoughts now looking back at your Vendée Globe?
It was an incredible adventure, a real commando mission to fix in Cape Town, then to start again and to get all the way back to Les Sables d’Olonne despite the pain and the struggle. I suffered physically with two broken ribs but mentally too I had to get to the end of myself to do it. Neither my technical team nor my partners put the pressure on me to leave again and so do I thank them. They just  waited for the decision to come from me.  But for me the only solution to be able to keep sailing was to “get back on the bike” as quickly as possible. Along with my first transatlantic, the Mini Transat, this Vendée Globe was the hardest race of my life. Of course, there is still a big frustration not to have been able to be in the race to the end, but to finish and get home was just like a victory in itself. And that made it possible to mobilize and benefit from an incredible solidarity: in this Vendée Globe, we saved 102 children with Mécénat Chirurgie Cardiaque.

Your partner, Romain Attanasio, reflected upon his arrival and indeed before on the immediate follow-on, rolling on with his project, was that also the same for you?
No, it was so hard, so far from what I had imagined. I couldn’t find myself asking these questions of myself about the future. I just had to finish and not waste my energies thinking about what to do next. I was quite traumatic and first and foremost I needed to digest what had happened

Two months on now, what are you thinking? And what about your partners?
I really want to go back! I know there is a lot of work to do to rebuild my racing confidence, I have to sail again, full pelt! We are still in discussions with my partners, but they were all very satisfied and happy with this Vendée Globe. Despite the abandonment, they very much enjoyed this adventure around the world. The feedback is very positive and the fact of continuing out of the race was a success. I am quite optimistic for the future.

“Sometimes it’s frustrating
not to to fight on equal terms”

The re-launch of Initiatives Coeur is scheduled for mid-May. Did you modify much during the work?
We mainly focused on reducing the risk of collisions. The boat was already fitted with the Oscar device and we added Whale Shield (a pinger in the keel that emits ultrasound to ward off cetaceans) and I continue to work with Madintec on an avoidance module.

This year you will race the Transat Jacques Vabre. Have you made progress on the choice of the co-skipper who will be sailing with you and what will your ambitions be?
Yes, we will be announcing soon. The key thing is to be associated with an experienced skipper who can help me get back on the road. My first ambition is to get my race head back and re-establish attack mode. Since my collision, I’ve been missing it! Also, I know that I haven’t learned everything about the boat it still has untapped, unexplored potential.

You are very complimentary about your boat which you clearly love do you still dream of having a new one?
My feelings are mixed on this subject. I think we’ve shown that we can be competitive with this boat, but sometimes it’s frustrating not to be on a level playing field with the newer Imocas. There is always that little glass ceiling: there were six women in the Vendée Globe, three with sponsors who have been on the scene for several years, but none have a boat built and set up to really go for all out victory. And inevitably, with me, this is my heart’s desire.

The new rules planned by the class (2021-2025) aim in particular to control costs, these are moves going in the right direction?
Yes, there is this ambition, we discuss it a lot among us, but when we have to decide, everyone looks at their own situation. To have a new boat is the dream, but it’s very difficult. I think we could have gone further in limiting costs, because It’s not easy to raise so much money. In reality we talked about one design booms and one-design rudders, which would have been very interesting to reduce costs, but these aspects were not taken into account. With the team and our partners, we are looking for a way to upgrade the boat for the next Vendée Globe and be one of the favorites, but it’s a complicated mission because the costs remain very high.

“What makes this class so strong
is how mixed it is”

The new rules also introduce new elements in terms of safety and a reduction in the size of the foils. How do you feel about that?
The rules are very interesting in this area. There is still a lot to learn and we must not waste what has happened with this innovation that we haven’t yet mastered because we have been doing things too quickly. I did in fact experience a high-speed crash and I’m not sure we should go faster at any cost. Whether we are going 30 or 35 knots, it still gets people dreaming.

In your opinion, was the latest generation of boats in the Vendée Globe too extreme?
I think some of the new boats were very stiff, very extreme, while others were more reasonable. Obviously, if I had the possibility of buying a second-hand boat from that generation, I would have left some to one side in my short list. But that is only normal and is fantastic. It means boats can be adapted to different ways of sailing. What is really interesting and exciting is being in a class that is evolving with a lot of different designs. So far, we haven’t converged to the ideal design, but I think that in the coming years we’ll learn how to deal with all this and learn all about the boats from 2020.

Looking beyond these aspects, what do you think about the IMOCA class?
The success and strength of the Vendée Globe meant there was a very positive impact and that has really helped bring the class alive. In spite of the difficulties with the health factors and economic situation, the sponsors are there. There are a lot of projects and that is very positive. On the other hand, we need to listen to everyone and not just to those who speak the loudest or who have the most money. What makes this class so strong is how mixed it is, how it has opened up internationally and we need to ensure we stick with that and encourage other skippers to join us.

Romain Attanasio has a just acquired Boris Herrmann’s IMOCA. Are you ready to join him in that category?
Yes, that is fantastic! I really think it is one of the best boats in the fleet. When I sailed alongside Boris, I found it hard to go as fast as him. I’m really pleased for Romain, and I think he made a wise choice. And it’s nice too because we know now we’ll be finishing at the same time!

Besides Imoca, would you like to do other sailing?
First and foremost I am always a fan of ocean racing especially with a small crew. I really like the Figaro, I also appreciate the evolution of the Class40s and the Mini-Transat is as exciting as ever. If I could have any opportunities to sail on these boats, I would go for it. These are classes where there are very good sailors, where the level is always very high, they always allow you to learn and progress.

A word about the offshore racing event at the Olympics, which seems to be on the edge. How did you react when you heard the news?
Inevitably I am disappointed. In Britain as in many countries, I have seen it has helped to relaunch short-handed offshore racing. It opened up opportunities it made it possible to introduce the discipline to young people, to women all over the world and therefore to create opportunities for sailors who wanted them. It’s a shame that it’s not. But if this has aroused interest and even vocations among some, it is not completely a failure.

Speaking of diversity, you are going to participate in training sessions intended to open ocean racing to female sailors, organized by the Magenta Project and Leyton, is it important to get involved?
Yes, whenever I can, I want to get involved and kick open doors for girls. There are a lot of women before me who inspired me and who made me want to be a sailor and I want to pass on all I can from now on. I want to give others what I have had, to share my experience because it is essential in sport in general and in sailing in particular.