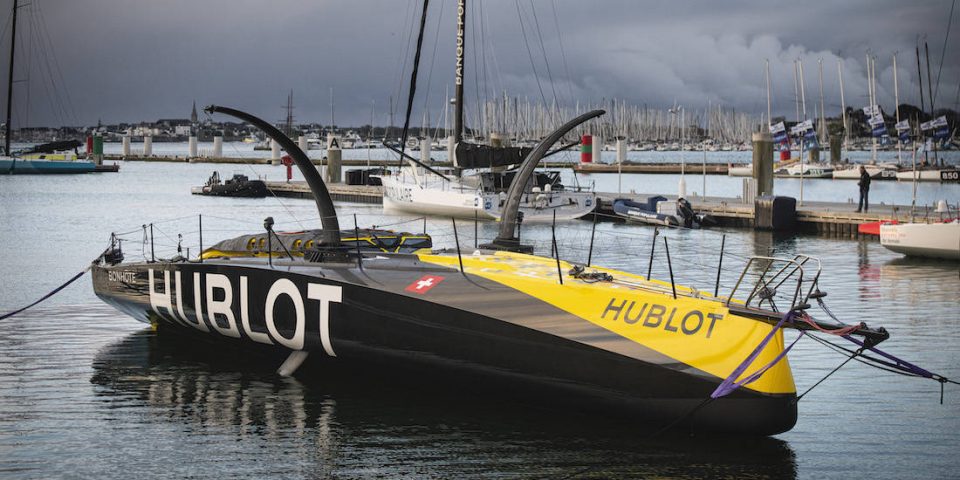 Vendée Globe: the race to find partners is in full swing

With Hublot (Alan Roura), Biotherm (Paul Meilhat), Guyot Environnement (Benjamin Dutreux), Freelance.com (Guirec Soudée) over the past two weeks several sponsors have revealed their colours attached to various Imocas, all with the next Vendée Globe in their sights. Meantime for other skippers, the quest continues.

Now over one year since the finish of the ninth edition of the Vendée Globe, a race that broke several key records (33 starters, 25 at the finish), the tenth edition is stimulating an unprecedented level of interest. Today, more than 40 skippers have expressed their intention to participate. Of them 38 have a boat, either existing or under construction.

Compared to previous editions, the return rate of skippers is now much higher. It was 44% between the two previous editions, 50% between 2012-2013 and 2016-2017.  Right now 22 out of 33, i.e. 66% have the budget and the boat to do it again. Only three sailors have so far formally announced that they will not be at the start on November 10, 2024: Alexia Barrier, Ari Huusela and Alex Thomson. And to that trio add Stéphane Le Diraison who reveals it to Tip & Shaft: “I didn’t have a good sequence of events and timings recently. I first wanted to build a new boat, but I couldn’t then I was beaten by the speed at which the other projects were launched, so much so that when I wanted to buy a second-hand boat there was only Arkéa Paprec left and it did not match what I was looking for. I have therefore decided to give up the next Vendée Globe and come back in 2023 in Class40 with an eco-design project.“

“The fact that there are so many coming back with projects are viable and interesting for their partners is mostly because the vast majority of them are with the same sponsors”, notes Antoine Mermod, president of the Imoca Class. According to him, 30 major sponsors who supported skippers in 2020 are doing it again for 2024. 9 of the 22 sailors back in 2024 will also have a new boat, proof of the commitment, at least equal if not greater, of their partners.

The Imoca class has counted 16 new partners since 2021. And some have international status. The American Fortinet (Romain Attanasio), the French Nexans (Fabrice Amedeo), the Swiss private bank EFG (Boris Herrmann), the German boatbuilders Alva Yachts (Jörg Riechers) have recently been joined in recent weeks by Hublot which is an LVMH group brand (Alan Roura) and Biotherm, a subsidiary of L’Oréal (Paul Meilhat).

“We are witnessing a spike in the profile in the class,” emphasizes Paul Meilhat. “Groups are realizing the opportunity that this presents as a worldwide communication medium.” Alan Roura adds: “Even though they are large groups, they realize that in terms of budget, the investment is not as expensive compared to other disciplines.“ His partner Hublot supported another Swiss skipper Dominique Wavre before and is therefore not completely new to sailing sponsorship, just like Biotherm which, in the 1980s, supported Florence Arthaud.

“Our commitment is no coincidence: the brand is back in sailing 40 years after a partnership in ocean racing and this is the year of our 70th anniversary,” comments Grégoire Benoit, CEO of Biotherm. “The world of sailing is part of our history and this echoes our commitments to the preservation of the oceans which have already spanned more than ten years.”

International groups are not the only newcomers in Imoca: Guyot Environnement, present in the Figaro since 2014, alongside Pierre Leboucher, has decided to support Benjamin Dutreux for the next Vendée Globe: “It’s a project that we’ve been working on since 2018, we were studying the right way to get involved in Imoca. We know that such a project can unite our workforce internally even more with our 400 employees. Being in the top category of a discipline with a company created by my parents 40 years ago is a source of great pride,” comments Erwan Guyot, CEO of Guyot Environnement. Who adds that he has “multiplied by 6 or 7” their investment in sailing. Although it is rare to see a company move from a Figaro project to the Imoca, Erwan Guyot assures us that “this will make other Breton SMEs, involved in Figaro, want to take the plunge.”

On the other hand, for Freelance.com, offshore racing is a great discovery. The company (672 million in turnover in 2021) has teamed up for five years with the adventurer Guirec Soudée, who acquired the former Omia-Water Family from Benjamin Dutreux. “We had never done sports sponsorship and we did not have the desire”  explains Claude Tempe,vice-president. “But meeting Guirec changed everything. We saw ourselves in his approach, there are many parallels between his way of evolving and the way we develop our business. It is a partnership that was in no way premeditated.” Freelance.com is financing the project up to 80%, the skipper is looking for other sponsors to complete his budget, that the main partner does not wish to unveil.

For its part, the communication agency Altavia, patron of Éric Bellion in 2016-2017, returns with the same skipper but with a different status. “Altavia is not a partner but an associate,” explains the sailor. “The idea is to be to form a collective of companies around our common values.” The skipper who was ninth in the eighth edition of the race aims to pool his project and the partners with other sailors, such as Martin Le Pape…. building 5 simple identical boats without foils!

Get the boat, the sponsors will come?

For other skippers, it is also time to speculate. And most have the same strategy: buy the boat, then convince companies, as Benjamin Dutreux was able to do, when he took the risk of buying the ex-Hugo Boss (Vendée Globe 2016 version) before signing up Guyot Environnement. This is the case of Benjamin Ferré, who bought the former Banque Populaire X, Tanguy Le Turquais (formerly Groupe Apicil), Sébastien Marsset (formerly Compagnie du Lit), the Swiss Ollie Heer (formerly Pure Best Western, acquired from his compatriot Beat Fankhauser), as well as Briton James Harayda (ex Time for Oceans) and New Zealander Conrad Colman (ex V and B-Mayenne).

“The Imoca market is so tight that there was an urgency to acquire a boat,” explains Tanguy Le Turquais, who gives himself another three months to find a partner. He is hoping for €500,000 for this season with participation in the Route du Rhum, then €2.5 million until the Vendée Globe. Benjamin Ferré already has a main partner – “a century-old family business” which will be announced in May but is looking for co-sponsors for a total budget of 1.5 million euros. Blablacar was interested for a while before throwing in the towel because of the crisis in Ukraine, part of its activity being in Eastern Europe.

“With the Covid and especially the war in Ukraine, we know that this type of budget is the first to be cut by companies, which does not help our research”, comments Conrad Colman who says he is “worried”, Colman hoping to raise 1 million euros per year. Ollie Heer, former boat-captain of Alex Thomson and the first German-speaking Swiss to embark on the adventure, is aiming for a budget of 4.5 million euros until 2025 and is primarily targeting Swiss companies. The Englishman James Harayda sets an entry ticket at €500,000 for a title sponsor and wants to launch a business clu”, the entry ticket for which would be €18,000. Sébastien Marsset also wants to bring together sponsors within a business club, Cap Agir Ensemble.

Given the number of candidates for the Vendée Globe, this quest for partners sometimes comes up against a major obstacle, that of not currently having a guarantee of being at the start in two and a half years, if the number of projects exceeds the limit of 40 set by the SAEM Vendée. “It’s a stressful challenge and difficult to explain,” concedes Ollie Heer. At Freelance.com, partner of Guirec Soudée, Claude Tempe wants to see it as an opportunity: “You have to try, believe in it and be motivated to the end. It is the constant state of mind of an entrepreneur and a sailor to fight knowing that nothing is won.”