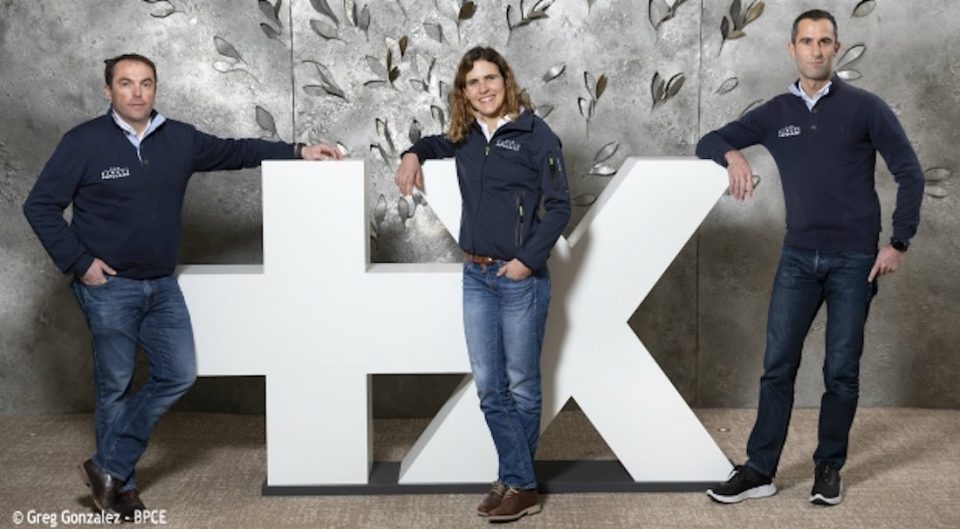 How Banque Populaire decides to continue its sailing sponsorship until 2024

From the fateful day, November 6th, when their Ultime Banque Populaire IX capsized on the Route du Rhum Destination Guadeloupe it took just over one month, until December 12th before the green light was given for an ambitious new three cornered project. Such is the success story which links sailing and Banque Populaire and which now sees the seemingly unwavering relationship extend past the 30 year anniversary now into 2024. The new triple pronged programme encompasses the building of a new Ultime for Armel Le Cléac’h, a commitment to the 2020 Vendée Globe with dynamic young female Clarisse Crémer on the former SMA, and two seasons on the Figaro circuit for Armel Le Cléac’h as the longstanding sailing Banking and Insurance giants commit to continue at least until 2024. Tip & Shaft takes a look at their decision to carry on….

A capsize in April off the Moroccan coast and then a second, during the early stages of the Route du Rhum-Destination Guadeloupe when the starboard float was badly damaged meant 2018 was a very testing, black year for Banque Populaire. The eleventh edition of the four yearly solo Transatlantic classic from Saint Malo to Guadeloupe was a key event for the sponsor, and for the skipper Le Cléac’h. The Ultime trimaran was recovered but was in too poor a state to rebuild or reinstate her.

Despite the loss, reckoned to cost about €10m, there was no question that Banque Populaire’s sailing sponsorship would end, ‘not even for half a second’ according to Christine Fabresse, general manager of local banking and the BPCE insurance division. “There was an immediate mood of solidarity and support for Armel.” she recalls, “It may sound amazing but that is the simple truth. We would not be turning our back on 30 years of such a partnership because if this. It is too long and too rich a story to stop just like that. Our initial priority was to wait for Armel’s own decision. We did not know what he would decide based on what he felt in his own mind and taking account of what his family thought, if he would want to go again and if so when?”

But Le Cléac’h himself says his own decision was made quite quickly. “Because it was not a straightforward capsize but there was a breakage which lead directly to the capsize then it in no way calls into question the way I was sailing or even that maybe multihull sailing like this was not for me. So when the sponsors asked, as soon as I had talked to my team, we straight away discussed what I wanted. And that was going back to the Ultime.”

The top priority now is the construction of a new Ultime under the supervision of CDK Technologies (the floats will be made at Multiplast). The build will take about 18 months and so is not expected until late in 2020. Because that would otherwise have meant a lot of time away from sailing for Le Cléac’h, the second initiative was proposed by the skipper.

“With Ronan [Lucas, director Team Banque Populaire, Ed], we spoke about Vendée Globe for me, but very quickly that question was put aside. Firstly because I had said when I won  that I did not want to do it again. And if I did go back on that and do it again I would have only gone out to win and that would have meant a new boat and it is already almost too late for that, and would have cost more money. Personally I wanted to go sailing in the Figaro. With the Figaro 3 and the 50th edition of La Solitaire and the AG2R in 2020, this allows me to stay sharp for the next two years on a very competitive circuit.”  Armel explained.

Ronan Lucas did however propose, among other option, a Vendée Globe project to BPCE’s management: “We presented all the options that there are in French sailing: from the Tour de France à la Voile to Multi 50s and so on. But the last two Vendée Globes with Banque Populaire have gone so well it was natural, after a first round evaluation, that a Vendée Globe project emerged alongside the Ultime and the Figaro.”

Christine Fabresse adds:” This triple project has emerged because it allows us to carry on with our  favorite skipper, to continue to work in field encompassing innovation, a theme that is important to us, and to have a projects which offer an ongoing narrative and transmission.” Banque Populaire were quickly on board with Lucas’ idea to bring on Clarisse Crémer, the dynamic 29 year old who came late to sailing but took second in the 2017 in the Mini-Transat, as a Vendée Globe potential.

“We presented five or six names, but very quickly, Clarisse rose to the top of the thinking for several reasons: her youth, her dynamism, her proven entrepreneurial spirit and, we must say, her communication is great. And she can perform as she showed on her Mini-Transat. She maybe seemed to come from nowhere but she showed she knew how to build her project to be successful. Everything about her was about communication, performance and youth”, says Ronan Lucas.

Clarisse Crémer admits she hesitated before committing: “We first discussed it at the end of November. I met with Ronan in a little, hidden office. He wanted to probe me about the project. I was unable to give him a firm answer. I did not sleep much after that and I took a full week to get back to him and say I wanted to take on this huge challenge. ”

Lucas meantime secured the charter of the former Paul Meilhat’s SMA, as one of several parties who were negotiating with Michel Desjoyeaux for the boar. The choice of boat is underpinned by budgetary considerations but also fits with the skipper’s experience. According to Lucas this triple project is done at a ‘normal budget’ for Banque Populaire, namely an all inclusive annual total for all sailing activities of 7 million euros (taxes included).

“For her first Vendée Globe, we did not necessarily want to put pressure on Clarisse with an ultra-competitive foiling boat, Ronan Lucas adds. She will have plenty of time to come back again with an ambition to win. And Paul Meilhat proved by winning the Route du Rhum that the VPLP-Verdier design which won the 2012 Vendée Globe (as Macif) is a reliable machine that can get on to the IMOCA podiums”. Like the next Transat Jacques-Vabre, on which Clarisse Crémer will be accompanied by an Le Cléac’h. He may have a role and mentor and coach during 2019 but Le Cléac’h warns, “I am not going to be there just to be a sailing instructor. The objective on the Jacques-Vabre will be to perform to achieve the bestresult we can get for the weapons we will have.”

The two co-skippers of the IMOCA to be renamed Banque Populaire X, will begin their preparation in late July, before taking on the Fastnet and the Azimut Challenge. They will be opponents on the Figaro circuit and in particular on La Solitaire Urgo Le Figaro which Clarisse Crémer will race for the first time, with her partner Everial, who she sails with until the end of June. Meantime Armel is aiming for a third La Solitaire victory.