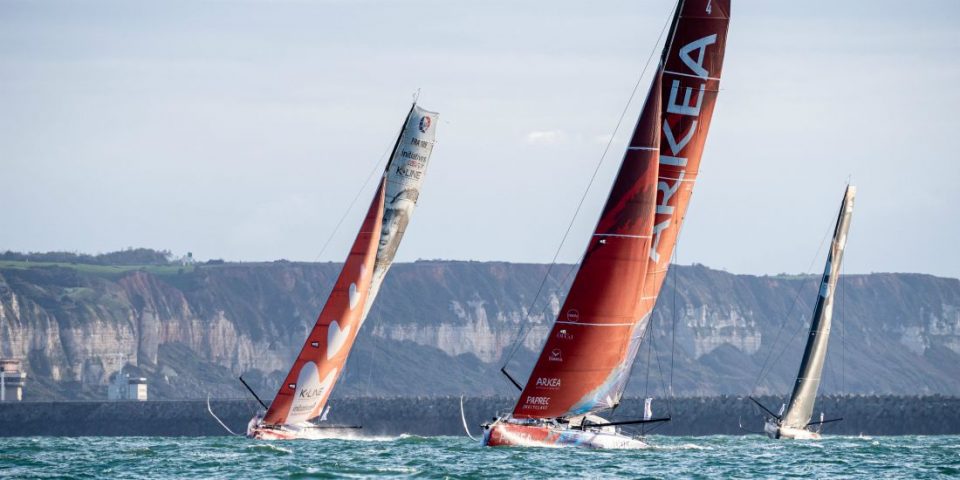 Antoine Mermod: “We are far from being concerned about The Ocean Race”

After a 2019 season which finished with the Transat Jacques Vabre victory of Charlie Dalin and Yann Eliès, the IMOCA class is setting up for an intense, exciting 2020. It starts with two Spring Transats,  (The Transat CIC and New York- Vendée) and then, of course, the  solo pinnacle Vendée Globe in November. Tip & Shaft takes stock with IMOCA president, Antoine Mermod.

What were your conclusions drawn from the Transat Jacques Vabre?
It is excellent, we had 29 boats at the start, the largest number of participants in an IMOCA race tied with the 2008 Vendée Globe, and 27 boats at the finish. That’s an excellent outcome complementing  the Route du Rhum, 16 of 20 finishers and of the 2017 Jacques Vabre, 13 of 13. The level of reliability is encouraging, even if on this Jacques Vabre conditions were not extreme. From a sporting point of view there were battles all the way through the fleet to the “smaller” projects and in the middle group. And up front in particular the new foilers showed from the start such great potential. With this Jacques Vabre, we got an insight into what the next Vendée Globe will be like.

Looking at Vendée Globe, the announcement of the withdrawal of the Belgian Denis Van Weynbergh shows that the race remains difficult to sell in certain countries, what do you think?
It is not good news, because the Vendée Globe is a great adventure that requires a huge commitment on the part of the skippers and their teams. So we cannot be happy when we see someone unable to realise their dream. As for the difficulty of selling the race abroad, we see it in France too with Paul Meilhat and Yann Eliès, the first two overall on the IMOCA championship, who will not be at the start. It is true that the profile of the Vendée Globe abroad must increase. Here our sailors, our engineers, our yards are benchmarks for the world. And there is no reason that our major races do not have an international appeal. We can’t be satisfied with having only regional or national profile and interest. It is important then to continue on this path of internationalization. It’s complicated to do, but we are carrying out several joint actions with the SAEM Vendée. Our association with The Ocean Race has led foreign sailors to be much more interested in our boats, the proof being 11th Hour who raced the Jacques Vabre and then the return delivery with an international crew. And The Ocean Race with all its community publicizes everything that happens in IMOCA. And the Vendée Globe decided at the end of the last edition to strive to have more visibility abroad, they are making great efforts in this direction. Certainly the interest overseas has changed a lot in the past three years.

You were talking about The Ocean Race. We haven’t heard about any new Imoca projects apart from 11th Hour, and there doesn’t seem to be much interest from the current teams. Is that worrying?
No. In France, everyone is concentrating on the Vendée Globe. That hasn’t stopped some teams from working on what lies ahead, but there is a lot going on. The same goes for projects outside of France. Things are moving in Spain and in the Southern Hemisphere and other continents, things are going to happen. It would of course be easier if there were fifteen boats signed up today. It’s true that it is a very frustrating time, as everyone is expecting so much, but we are not worried at all. Today we’re on the dark side of the moon if you like as far as projects are concerned. It’s too early to say whether it’s going to turn out well or not.

You mentioned 15 boats. Is that the goal?
At the start, we were talking about 10-15 boats, now we’re looking at 8-12. Having said that, there are two stages: the first will finish next summer, when we will know how many new boats there are going to be and the second, just before or after the Vendée Globe, when we’ll find out how many boats will continue until The Ocean Race. What I keep on saying is that for a strong project doing the Vendée Globe, adding in The Ocean Race doesn’t lead you into crazy budgets in comparison with a season with the Jacques Vabre. The ten biggest teams in the Vendée Globe already have 80% of the budget at their disposal with the possibility of getting an extremely big return on the investment.

Except that if you look at the names of the partners for the competitors in the Vendée Globe today, you see that very few are interested in what is happening outside of France…
That is why the partnership with The Ocean Race is a long term strategy. The first go is a bit like a transition, as the announcement of our involvement with the race came fairly late in relation to the projects in the Vendée Globe. We have merely added an opportunity that did not exist before. But one of the long term goals is to be able to interest big sponsors other than the big partners who have interests in France, who are looking for coverage abroad, so the idea is to attract other profiles.

You talk about the big projects in the Vendée Globe. Some have already spent a lot on this campaign with a second pair of foils for most of the new boats, or even a second mast. Isn’t that a bit too much?
Yes and no. No, because the teams that are there to win are giving themselves the best chance possible to do that. It’s nice to see a certain number of teams managing to play at that level. Yes, because in absolute terms, they are huge budgets. In the long term, we are paying close attention to ensure that the budget model is such that it enables us to have great races with as many boats as possible.

You will be talking about the future at the next IMOCA AGM in March and in particular the class rules for the 2024 Vendée Globe. People are talking about foils on the rudders. Are we heading towards that?
That is obviously one of the main subjects we are currently working on. Today, there are teams that think there is no other choice, believing that as soon as you fly, you have to give yourself the means to do it well. Others think that we have already taken a giant leap with the 2020 generation and that we need to digest that change before adding new features. Today, there is the possibility that these foils will be added, but I can’t say whether it will happen or not. The AGM will decide. There are also questions about the foils themselves: do we need to apply limits or not? Knowing that there other matters are linked to that, such as the cost of parts, the time it takes to make them and the problem of space in the harbours.

You will also be talking about the 2021-2024 programme. What can we look forward to?
The period after the Vendée Globe is looking good, as unlike in 2016, when a lot of projects ended at the end of the race, a certain number have already been confirmed until the 2022 Route du Rhum or even the next Vendée. So this isn’t a cut-off point, but rather a continuation and we don’t intend to revolutionise things. We have some great boats, a good programme, some incredible skippers and some happy sponsors. It would be useful to consolidate that rather than look for something else. We will continue to count on the major events with in addition to them, The Ocean Race, and other races will complement the programme.

What’s happening to the Barcelona World Race?
We don’t really have a concrete project for the next Barcelona, so for the time being, it is not on the programme, but maybe it will return. We are still in regular contact with the FNOB.