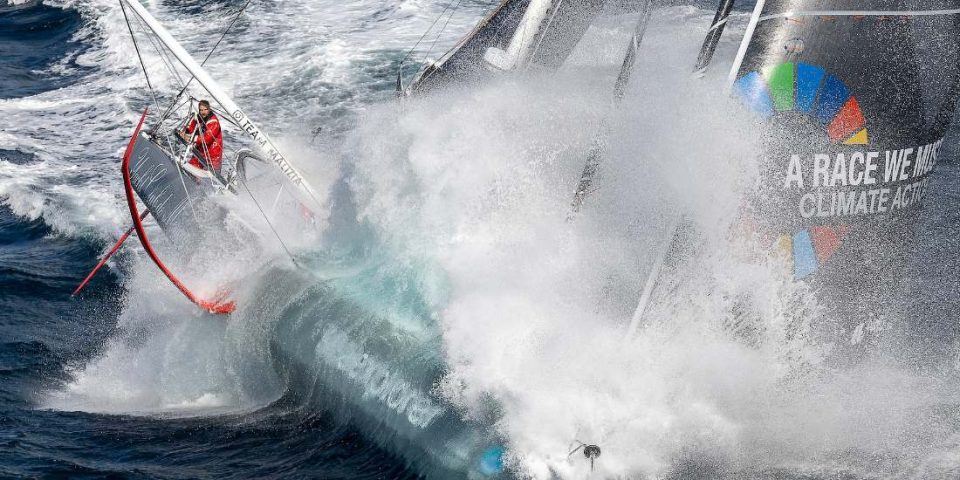 Boris Herrmann: “I want to get in the right frame of mind to be able to win”

Fifth in the 2020 Vendée Globe, Boris Herrmann very quickly started a new campaign with more means and a new boat designed by VPLP and built by Multiplast, which is due to be launched “at 10 a.m. on 19th July,” he promises. Tip & Shaft talked to the German about this project, and as the One Ocean Summit comes to an end in Brest, about the environmental concerns that are dear to him.

The One Ocean Summit ends in Brest on Friday. Does such an event help move things forward or is it just a place to show off your good intentions?
That’s a good question! I took part myself, spending several hours at a forum concerning observing the ocean with the Imoca class. I think the weak point in these meetings is the commitment from civil society and ordinary people. Of course, President Macron and some other leaders are here, so there are articles about the summit, but it lacks the emotional side, a way to get the man in the street involved so that he will understand that this affects him. As far as that is concerned, the Vendée Globe is a good way to offer this subject a powerful means of communication.

How long have you been really concerned about the topic of preserving the oceans?
In 2010-2011, we did the Barcelona World Race with Ryan Breymaier on Bilou’s boat (Roland Jourdain’s ex Veolia), and due to the presence of ice, we had to sail further north than planned and add a great distance to our route. The result was it took us 100 days whereas we had only taken 85 days of food aboard. Ryan lost 25 kilos. That left its mark on us and led us to think about the problems of global warming, even if I had always been interested in this subject and in fact did studies in sustainable management.

In your ocean racing project, what exactly do you invest?
In 2008, I met Martin Kramp, a German who lives in France and who developed a sensor for racing boats with Yvan Griboval. We stayed in contact and the day I get my own project up and running, I contacted him to offer to take his laboratory aboard to measure the levels of CO2, the salinity and the temperature of the ocean. We found donors to install it in 2018, and it worked well. That gives our team a lot and everyone is interested. We also set up a CO2 emission compensation programme thanks to an NGO in the Philippines, who plants mangroves, the advantage being they grow more quickly than trees, absorb more CO2 and create an ecosystem. We launched the Malizia Mangrove Park and planted more than 500,000 mangroves over 18 months with the aim of reaching a million. Now, making up for the emissions is not enough and what is important, is the transition and innovations to limit the carbon footprint.

An effect that is very important when building boats like your new Imoca. What are the possible solutions?
There is no secret recipe. We work with the class, and in particular on the new rules, including those concerning bio-composite materials that we will be making the most of by building hatches, doors, flooring and parts of the cockpit cover using bio-composites. We have also been cutting back on travel. That started with Covid, but has continued to be a way of working, to the extent that I only really met up with the designers when the boat was practically fully designed! But the most important thing for me is to ensure a long life for our boats. We can see today that Jean Le Cam’s managed to finish in the top 5 in the Vendée Globe, and yet this was her fifth round the world voyage. We have boats that can remain competitive twelve years or more later. We don’t throw them in the bin after each Vendée Globe. That smoothes out the carbon footprint over time. I think it is important to mention that as the debate can sometimes be a bit one-sided.

You sold your previous Malizia to Romain Attanasio to build a new one, was that planned in advance or was did it all happen because of the success of your round the world race?
It was more the success that triggered it all. There was huge enthusiasm in Germany which grew as my Vendée Globe progressed. During the climb back up the Atlantic, there was something on TV almost every day, even in programs for the general public, it went beyond the just sport. A study by the Melt Water Institute estimated the advertising value of media fallout at 420 million euros. We must certainly take that with a pinch of salt, but it shows the importance of the media impact which broke the ice in Germany, we did not expect that at all! It’s fabulous to see how the Vendée Globe has allowed a young and international team like ours to achieve such success and we really had a very strong dynamic that pushed sponsors to come and meet with us and now to take part in the adventure. We were even able to choose our partners, today we have eight united under the slogan “A Race We Must Win”. This dynamic led us to tell ourselves that we would perhaps only have the opportunity once in our life to build a new boat, which is why the choice was made very quickly.

With an increased budget of course?
Yes, especially since at the very beginning of the story, the Imoca was an annex of the GC32 project, we had just enough to pay for the charter and insurance of the boat. We had a very limited budget for four years, it was just at the end that we found Kuehne+Nagel and the other partners which allowed us to put on large foils. Today, I won’t give you the number, but we are up to the level of other favorites, we have the means to do very good things and the team has grown, we are 25 full-time.

And therefore you have higher sporting targets?
The dream of every athlete is to win something, even if I think that in the last Vendée Globe, in my head, I was not 100% in that mindset: I was close to the podium at the finish and in the end that stressed me out, I wasn’t ready in my head to tell myself that I deserved to be there and that I was going to give it my all in the last hours, I have a little regret about that. For this second campaign, I want to put myself in the mental and technological position to be able to win. Now, we are not the only ones to have had a big media success, the proof: there will be 15 new boats and almost as many favorites because most of the skippers of these boats have already done the Vendée Globe. The level of competition will clearly go up and even to be fifth, as in my first Vendée it’s probably going to be a lot tougher. So for me, the sporting goal should not be a number, but the process that should allow me to be competitive. You should not measure the success of the campaign with a number on a piece of paper, in this game that is too risky.

Why did you choose to run The Ocean Race?
That’s also why: we thought it was great to build a boat for the Vendée Globe, but we know that it’s a super tough race that can end after two days if you have a little breakage. So we wondered how we could give ourselves more opportunities to succeed overall in the project, the answer was more activity, so more races. The Ocean Race has also always inspired me and I immediately felt when the discussions started with the Imoca that it was a great thing to associate the Vendée Globe and The Ocean Race in the same ecosystem. Today that is going a little too slowly, I hope there will be 4-5 boats, maybe 6. But in the worst case if the race falls into the water, we will still sail the course.

What crew will you go with?
There will be Will Harris [who has accompanied Boris Herrmann for three years, editor’s note], a Frenchman very well known in France and a woman who does not come from France, we have not yet announced the names publicly.

Finally, can you tell us what your new Malizia will look like?
It will have more rockered lines than those we have seen so far, the whole line will be rounder, from front to back. The main objective is to have more tolerance in the sea; a good boat for the Vendée Globe is not going to make huge peaks but high averages. On the last cycle, the architects’ VPPs gave speeds of up to 26-28 knots in southern conditions, in reality the good averages over 24 hours have been 18 knots no more, so if we can already pick up a or two knots, that won’t be bad. We will have a closed cockpit in the Hugo Boss style, but with more space and vision, on the sails, the horizon, but also towards the rear. And I will have my bunk in the cockpit next to the column and not far from the winch, with the screens in front of me. Between the Route du Rhum and The Ocean Race, there will be zero adaptation, apart from the number of spoons and cups!