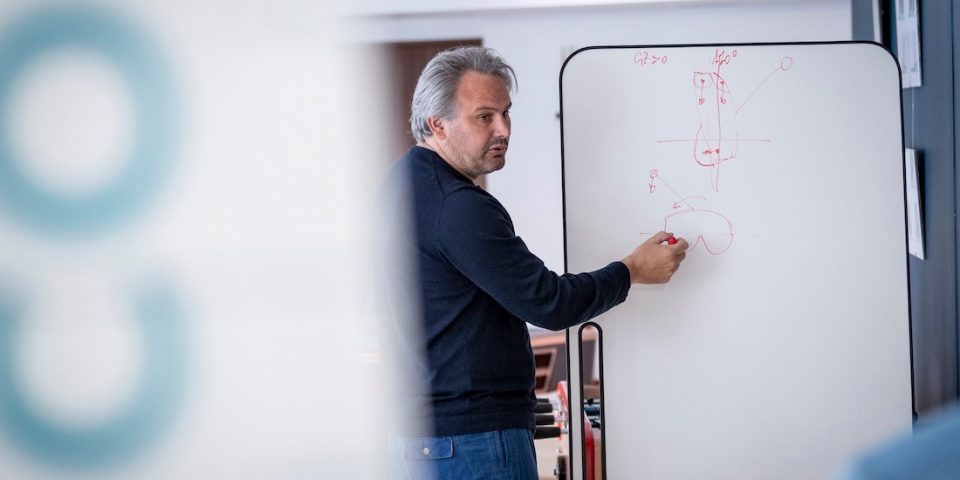 Juan Kouyoumdjian: “Its is very difficult, if not impossible, to design boats and foils that work well at all speeds”

You hadn’t designed a 60 footer since Cheminées Poujoulat in 2011. What precipitated your comeback to the Imoca?
Sébastien Simon’s project (Arkéa Paprec) was the trigger. They asked me to work with them at the end of 2017 with very specific conditions. I had a second offer soon after that which I had to decline  because I had signed a non-competition agreement. Before we launched last summer, a third project was proposed to us for Corum l’Epargne. I got authorization to embark on this new boat due to different reasons and it will be launched at the end of next month. It shares the same hull mould as Arkéa Paprec.

Was your collaboration with Vincent Riou on the PRB foils also decisive?
Yes, I started there. We have been working with Vincent since 2014. We optimized the old boat quite a bit, not only the foils which are the most visible part. We had adapted PRB to the new rule, working on the evolution of ballasts and we made a lot of progress on the boat which had been very well designed by Guillaume Verdier and VPLP.

How do you assess the first season of your new IMOCA?
The season is positive in general because we always learn things and we include the excellent performance of PRB, I don’t think we can really separate the two. In sporting terms, Arkéa Paprec’s season was obviously very disappointing. All these boats are so technical and pushed by the skippers that damage does occurs. I hope that for Sébastien Simon and his team the problems came at the right time and are now behind us. That said the boat has shown great potential. If they hadn’t broken the second foil, Sébastien and Vincent would probably have finished on the podium of the Jacques Vabre, which with a single foil would have been a remarkable performance. But from the start, we had to face a lot of technical problems, especially in the foil control system. From the start, these appendages did not have the desired efficiency at all speeds.

Are you talking about rake control, the incidence of foils?
Yes, the system we designed is very complex. It did not work and the foil could only load up to 50% of what was expected, due to the deformations of the structure. This was especially true downwind where the foil is asked to lift only vertically. As soon as the wind angle was tighter and foil had to produce a lateral component, the boat was fast and even showed impressive performance on certain sections of the race. Unfortunately, IMOCA has now changed the rule due to interpretations (see below). So, instead of revising and perfecting our system, we have been forced to completely change it. This is the big job this winter, with the construction of the new foils.

Do we know today why the foils on Arkéa Paprec broke?
Yes the reasons have been identified but I cannot say any more. Experts have been appointed. I prefer that the team communicates directly on the subject…

If they didn’t break after a shock, as the skippers seemed to rule out in Salvador de Bahia, is there a design or construction problem, or both?
What I can tell you is that PRB which has made two Transats now without breaking their foils, which are thinner than those of Arkéa Paprec. Draw your own conclusions. This is why I said earlier that we cannot analyse the season by separating the performance of these two boats.

More generally, what lessons do you draw from the last Transat Jacques Vabre?
I think Charal should have won the race, even weather strategy is a big part of the game and I am not taking anything away from Apivia. Charal is a well consolidated project and has some astonishing performances, notably VMG running. Hugo Boss has also shown remarkable ability at this pace during a few periods. Architecturally, the lesson I learn from all of this is that it is very difficult, if not impossible, to design boats and foils that work well at all speeds. There are boats optimised for certain conditions.

Sticking with IMOCAs but talking about crewed racing, how are things going with the Spanish project for The Ocean Race?
We’re not working full out, but worked throughout the year on the basic design and shape of the boat. We gave ourselves the deadline of being in the yard by March 2020 to be in with a chance of lining up with a winning project. The deadline is getting close and in terms of the funding, things haven’t made any headway. It’s not down to me to speak on behalf of Xabi Fernandez’s team, but it is clear we are not ready for it. There is a plan B which involves lining up on an old Imoca that has been refitted for the crew. In general, it would be a pity if only a few boats were built for this race, as it could lead to the appearance of some really exciting boats.

And the Cup. What do you think about the AC75s?
I have always followed that closely. I may even get involved with a team. I can’t say more for now, as we haven’t completed the agreement, but it won’t be as a designer, but rather to carry out a task linked to the performance of the boat. The Cup has very much become a niche market with very extreme and demanding boats. Even if, by definition, you only need two boats and three races for an event, it doesn’t look like what we saw in the past. More generally, the world of sailing has lost some of its strength. Apart from the Imocas, there are very few prototypes being built. We are building a 125-foot boat, which will be launched in Finland late this summer. There are some IRC boats, but the market has dried up. Olympic sailing has shut itself away in a niche one design market. Alongside that, there is a very active second-hand market for IRC and ORC boats, as those classes dislike innovation. I hope I am wrong, but we’re heading for a fall that the market has not experienced for a long time…

The arrival of foiling has made costs rise a lot and made it increasingly professional. Is that maybe the cause of everything drying up as you say?
That is an excellent question and it is probably too early to give a definite answer. Flying itself is quite extraordinary. But it is true that it has a huge affect on the costs of designing and running a boat. So, you can only sail on small dinghies or in the context of the Cup. But on an AC 75, if you establish the ratio with 11 sailors and 120 technicians, it’s horrible. This desire to fly may have pushed us too far towards highly technical boats. I think that the Cup should look more at the sailors. We don’t need such complex boats to organise a great event. There are just four teams with huge budgets and when you see how much time they spend on the water, it’s ridiculous. But the Cup is still the Cup. As in every area, there are ups and downs in terms of changes. I think there will be a reverse effect or at least an adjustment to find a new balance.

Foil adjustments being monitored. The arrival of the new foilers and what René Boulaire, the official measurer, saw when he examined the fleet, led the Imoca to ask its Class Rules committee (CRC including Daniel Andrieu, Philippe Pallu de la Barrière and Simon Forbes, technical director of World Sailing) last autumn to examine the situation. “As class rules were drawn up, they could lead to a problem of interpretation of where the limit and spirit were to be seen,” explained Antoine Mermod, the class president. The Transat Jacques Vabre was raced within an exceptional framework and the CRC delivered its interpretation after the race, which led them to reviewing their system.” The interpretation of 34.2019 – which can be seen on the Imoca website – states more clearly the degree of how freely the upper and lower bearings can rotate.