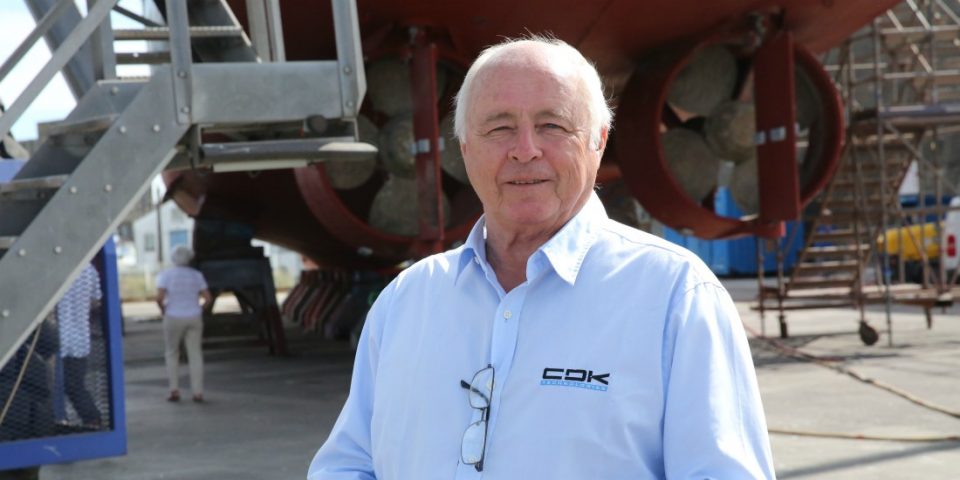 Philippe Facque: “Our build schedule is full for the next year and a half at least”

With two Ultimes currently in build (Macif and Banque Populaire) and four new Imoca (Charal, Arkéa Paprec and Apivia, already recently launched as well as the new Corum to come), the CDK Technologies yard is on the crest of a wave during this pre-Vendée Globe year. We pressed for the chance to speak with CDK’s managing director, a very discrete Philippe Facque.

Apivia is the last Imoca launched out of CDK, what does this boat represent, on the build side, for your company?
Well, like all new boats, there is a progression, as each successive new boat is more and more sophisticated. What is interesting about the last Imoca is that there are now different architects,it’s interesting to see the differences between a VPLP, Charal, a Verdier, Apivia and two Kouyoumdjians, Arkéa Paprec and Corum. These last two have the same hulls but not the same deck plan. And now today we see fully covered in boats, like Apivia whose cockpit is closed. It is also interesting now that the teams and the skippers are so much more invested and involved in all the design and construction phases, everyone puts their experience and ideas and what they want.

Are the teams more and more present on site now during the construction phase?
It depends on the teams. Some are a lot more involved, like Banque Populaire or MerConcept, where it is very structured, each employing a project manager and they also do a lot of things themselves. These are really complementary relationships and it is imperative that the team of the shipyard and the boat team get on well.

How has the collaboration with the design offices evolved in recent years?
It becomes ever more and more rigorous and meticulous. All the plans are seen and fully reviewed. It is not us, the builders, who have the first line contact with the designers. It is the client who order their plans from the architect and then they pass them on to us the plans once they are fully reviewed. And then from there it is an ongoing discussion between the three parties.

Do you have your input?
Only on the technical decisions. We can refuse to build according to a method or with a product that we don’t feel confident about the result or if we do not have the experience with. For all the parts built with new materials, we do full lab tests to know if it will be strong enough. That is part of our job, because after all we have a responsibility if it fails.

Have construction methods evolved since the previous generation of Imoca?
Not necessarily with the methods but the materials. They require us to be super vigilant on the materials and how we handle and use them. But as to how we build with them it does not change much, vacuum bagged pre-impregnated cloths, baked 90 to 110 degrees depending on the laminate cloths.

Do the boats take longer to build and are they more expensive to build?
They do take a little longer to build, because we now spend more time on the reinforcing around the foil boxes, that is all done by hand very meticulously. They are also a bit more expensive, because the materials costs go up, the price of carbon has not gone down.

You have built four of the seven new Imocas and four Ultims in a few years, what do you think gives you an edge over your competitors?
I guess you should ask the question to our customers! We took a real hit on the head when Hubert Desjoyeaux died in 2011. We took some time to rebuild but have a great team now and a solid business structure. Over the last 4-5 years, we have built a very good team, rigorous and competent, centred round Stéphane Digard and Yann Dollo complemented by young engineers who are good and operators who do very good job. It is the rigor that counts, you have to be on it all of the time, every minute of every day.

So this is a good period for CDK?
Of course. We have a lot of work: our build schedule is full for a good year and a half. That means we have to turn down certain requests. I touch wood and I hope we will have more good projects in the years to come. This is one of the dangers of this job, it is difficult to predict what will happen in two years time.

Are you building more and more foils?
We have started to, for example doing those for Macif last year and we will probably do Banque Populaire’s. It’s exciting because they are big, very technical pieces, it’s a real challenge. For the moment, with our resources and facility we have to build them in two pieces. The ideal would be to do it in one, or otherwise, we cure them somewhere else like we did for Macif – at Airbus which has big autoclaves. But it is risky to move by road parts which are not yet cured.

Did you have to adapt the structure of the firm to deal with the increasing demand? How has turnover evolved at CDK?
Yes. Today if you count Port-la-Forêt and Lorient, there are eighty of us, which means we have to be very careful to ensure quality remains high with a lot of changes concerning quality control and checks… This year, we will have a turnover of between eight and nine million euros as opposed to seven in previous very good years and around six on average.

Which boats are still being built at CDK?
Looking at the Ultims, there is Banque Populaire, which is progressing well, then there are the floats and crossbeams for Macif, but we don’t have the room to assemble both boats. I think Macif will be assembled in their new shed in Concarneau. As for the Imocas, we still have Corum. We do have some other projects coming up, but we can’t talk about them for now. They will be announced shortly.

What about boats for The Ocean Race?
Discussions are continuing of course, but you probably know more than we do! And we have signed confidentiality agreements.

The Vendée Globe boosts the market. What do you think will happen in the post Vendée Globe years?
Unfortunately, we cannot predict what will happen. The surprising thing today is that people say the boats are increasingly expensive, but with each edition, there are more and more orders and more importantly, they are placed as soon as the Vendée Globe finishes, whereas in the past, there was usually a gap of a year. I think that The Ocean Race should fill that gap.

You mentioned Macif, which will probably be assembled in Concarneau. Today, more and more teams have their own yard. We saw that with Arkéa Paprec, which was partly built by Vincent Riou’s team, and Corum, jointly built by Mer Agitée. Is that something new and does that mean extra competition for you?
Yes, it’s new. For Arkéa Paprec, it was their choice; for Corum, they would have liked us to do more, but our workload did not allow us to do that, so it slotted into place well with the finishing work done by Mer Agitée. We don’t see it as competition for the moment, but it could become that. But not everyone has the heat chambers and ovens that are required. You have to be certain that you can recover the cost [the oven at Keroman, set up a year ago, cost 800,000 euros, editor’s note]…

Are you hoping to diversify outside of sail racing?
When I took control of the yard in 1993, I said that 30% of our production would be from areas other than boats: we never had the time for that and that is still the case today. We did do the blades for a tidal energy scheme, and we hope that Sabella will manage to develop others, which are even bigger. Apart from that, we have requests to make foils for passenger and cargo vessels, but once again it is a question of availability.

When you look back at the history of CDK, how do you feel?
I wasn’t there at the start [he arrived in 1993 to inject capital into the yard created in 1984 by Jean Le Cam, Hubert Desjoyeaux, Gaëtan Gouérou and Marc Van Peteghem, editor’s note]. I think on the other hand, I was one of the first clients for the construction of a big boat with the Royale catamaran and I see it as a fantastic adventure. There have been complicated moments as well as busy times. You can’t make yourself a fortune with this work, but it’s an interesting profession, and there are always new things to discover with a lot of research. You have to progress and we really want to improve all the time