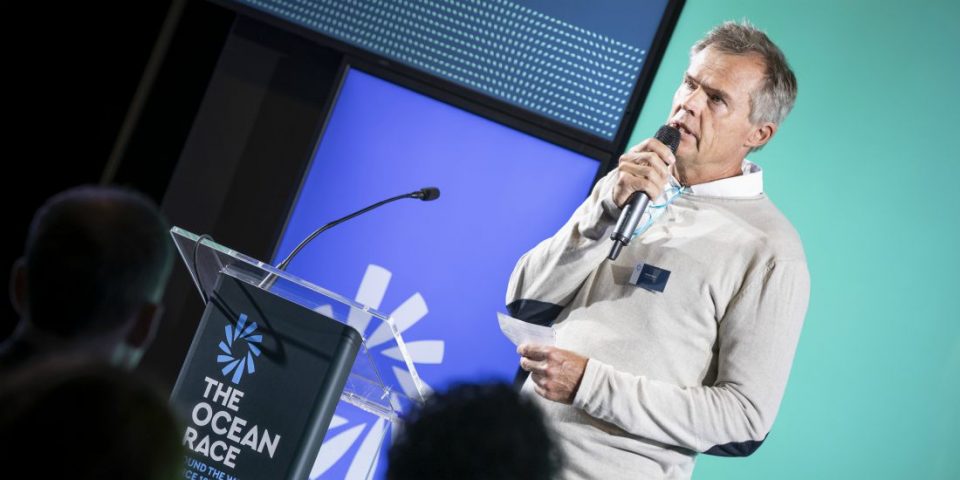 Johan Salén: “Ocean racing has the qualities to emerge stronger from the crisis”

With the Covid-19 pandemic affecting the whole planet, it has meant a great deal of uncertainty for sport in general and sailboat races are no exception. What will the impact be on our sport? What changes will there be to the economic model? How do races need to change? How will sponsors behave?
To try to get to grips with this new situation, Tip & Shaft is carrying out a series of five interviews about the future of sail racing. Our fifth guest is Johan Salén who, with Richard Brisius, is co-owner of The Ocean Race. Here he talks about the impact of the Covid 19 crisis on the 2021-2022 edition of the crewed round-the-world race and the advantages of ocean racing.

What is the impact of the Covid-19 situation on The Ocean Race 2020-2021?
Certainly the world has changed a lot in the last three months. There are now so many uncertainties concerning the evolution of the virus itself but also the consequences of it on sporting events. For our part we don’t have any events planned immediately, apart from the Ocean Summits, so we do have a little more time to adapt – compared to the Vendée Globe, for example, which, I hope, may have place this year. Running it is clearly the right thing to do. But if we had had to organize The Ocean Race this year it would have been very different, because the stopovers would have complicated things a lot. Right now we are in full discussions with the sponsors, the teams and the cities, to make a decision on the next edition. It is difficult to find the ideal moment to decide, because we both want to decide as quickly as possible – in order to remove the uncertainties for all those involved in the race. But at the same time, the longer we wait, the less uncertainty we face. But I think we’re going to try to make announcements in the next few weeks, if not the next few months. From our point of view as organizers, we can easily arrange for the race to take place on schedule, in 2021. Beyond that, though, some teams are still looking for sponsors and for the moment, it is quite impossible in that area. I hope it will pick up again after this summer. The same goes for the cities: some are ready, but maybe it’s better to wait.

Does this mean that you are studying different scenarios, possibly including that of postponing this edition for one year or even two?
Everything is a bit open. If the race does not take place in 2021 the most likely choice would be to postpone for one year. Not for more that would be too long. We have also thought of other options, like racing it in two parts, but there are quite a few drawbacks for this solution.

Are you also studying the possibility of modifying the route, or even reducing the number of legs?
We don’t think it’s a priority right now. It is quite interesting to note that there seem to be two schools on this subject: for the teams which have already participated in the race none really say that we have to make it shorter with fewer stages. Besides that we already have two less than the last time. On the other hand teams that have never been involved in the race, French or otherwise, some tell us that we must try and reduce it. The most important thing is that the event remains very international and visits all the continents of the world. That is a fundamental value of The Ocean Race. Then there are things that do need to be studied, like limiting the logistics, transport, and simplifying the concept, so that it is cheaper and more “sustainable”. But I don’t think the problem is really the number of legs.

“IN THE IMOCA CLASS, I AM A LITTLE SURPRISED
THAT WE DIDN’T MANAGE TO GET MORE MOMENTUM”

How many teams are you expecting today?
To date twenty teams are registered. Bur that is not a picture of the reality because some of them will not succeed in getting their funding. Equally, though, there are also interested teams that are not registered. So in the end, right now it’s hard to say. It is certain that the timing of the Covid-19, from a prospect of finding sponsors, is not good. In the 65-foot division, today there are eight groups working towards a start. Bear in mind that in the last race that the organization controlled seven of the eight boats and they were all sold to teams who wish to participate in this next edition. Two of these teams are now 100% funded. The others have part of their funding. The eighth boat, that of Mapfre [today I love Poland, Ed’s], was sold to a group that never really had the ambition to participate in The Ocean Race and it is now for sale. In the Imoca class, it is certain that among the fleet that already exists and is preparing today for the Vendée Globe, I am a little surprised that we didn’t manage to get more momentum. There is more work to be done here, for sure. We mostly talk with teams that have an international interest. For others, it’s more difficult. Otherwise, we have expressions of interest from teams who are not in the Imoca class today from many countries: France, Italy, Holland, China, Spain, New Zealand, United States, England and Germany. These are all projects seeking funding, but who intend to be on the starting line. The thing is that with the Covid-19 for the teams that had planned to build a new boat for 2021, it is now too late. They must find solutions to buy boats or cooperate with existing teams.

In our interview he gave us last week, Stewart Hosford appeared quite worried for the next edition of The Ocean Race, do you share his concern?
(Laughs). I do not want to get into this controversy, but it is important to know that he was very involved in the collaboration between OSM [Open Sport Management] and Imoca that did not work very well and that his group [Origin Sports Group] was in competition with us to buy The Ocean Race. In the end it was decided between the two of us. For sure, right now, it is certain that this Covid period makes it much more difficult for everyone to find money. This uncertainty is negative. At present it is almost impossible to discuss things with sponsors. But when we compare things to previous editions, when we look at the number of serious groups who want to participate and who are building teams and who are talking to sponsors, we have three times more than in the last two editions. That’s very positive.

How do you see, more generally, the future of ocean racing in the short and longer term?
For me, there is no doubt that ocean racing has the qualities to come out of this crisis even stronger. On the sustainability side and the human side we have real credibility compared to other sports whether solo or crewed racing, that is very strong. I think that offshore racing can also be a catalyst to promote working with other countries. We do see that in times of crisis some people tend to take care of their business (looking inwards only), which, in the long run term is not a good development. Ocean racing, especially a round-the-world race with stopovers, can really help change that mindset. I also think that ocean racing is the sport that can take full advantage of technological developments, to allow us to follow on land what is happening live on boats and to share virtual experiences. People especially young people are enjoying and sharing more and more experiences through other people’s endeavours via their mobiles, their tablets. Ocean racing is very well placed for that. We’ve already done a lot in this area and it’s very exciting to develop this virtual side of the race even more. Especially as more and more companies reduce or restrict movement, we can no longer send people right and left to participate in an event like The Ocean Race. The physical presence will not disappear but it will be less prevalent, less frequent and that will require more work on this virtual experience part, on the ocean, but also on villages and stopovers.

The last edition of The Ocean Race put the accent on sustainable development, how do you plan to act even more seriously on this theme?
It is a subject which has become something central in our organization and is really part of our DNA. Today, it is impossible to go backwards in any way and this approach is “win-win” for everyone: the organization, the sponsors, the teams, the cities. Our objective is to press on hard in this area, but not forgetting our core reasons for being: the bottom line is that The Ocean Race is an ocean racing sport event, but it is an event that must bring something to everyone.

The last edition showed that with the one design, we could certainly have a slightly less efficient and less fun boats, but still produce a very exciting race. Does opening the Ocean Race to Imoca, a class of boats in which the search for performance entails ever higher costs, meet these sustainable development challenges?
There is no doubt that the environmental footprint linked to the construction of the boats is significant, but I think that measures have already been taken to go in the right direction, such as keeping the 65 footers for the third time. Until now we have tended to change boats with each edition. We also see that some Imocas are still racing after fifteen years. There are fewer new builds than in many other classes. The Imoca is very oriented towards these sustainable themes – especially the younger ones – and it works towards more sustainable building, it is an important subject in terms of ecological footprint and costs. And you have to be careful that the costs do not rise too high, especially because of the period of recession that the post-Covid world will experience.

Can race organizers play a role in imposing rules on participating teams?
I think there is no need to impose particular rules in this area. In my opinion, we are all in the same boat, the important thing is to work well together. It’s true that in contracts that we have with cities, they must show that they share and adhere to this aspect of sustainable development. But have never had any problems, because everyone wants to go in the same direction and the current period will accelerate the movement.

Where do you see ocean racing in five years?
We have to be realistic, we are going through a more difficult period for sponsorship but it will not be impossible. And I think that ocean racing is very well placed to suffer less in the future than other sports, especially those that depend heavily on the public and on TV rights. And I think the concept of racing round the world will always remain very strong. The Vendée Globe is a great event, especially in France, maybe not as strong commercially outside of France. But for the next edition, in 2024, we may be able to contribute to the fact that there will be more international skippers, this is the synergy that we are trying to create with the Imoca class.