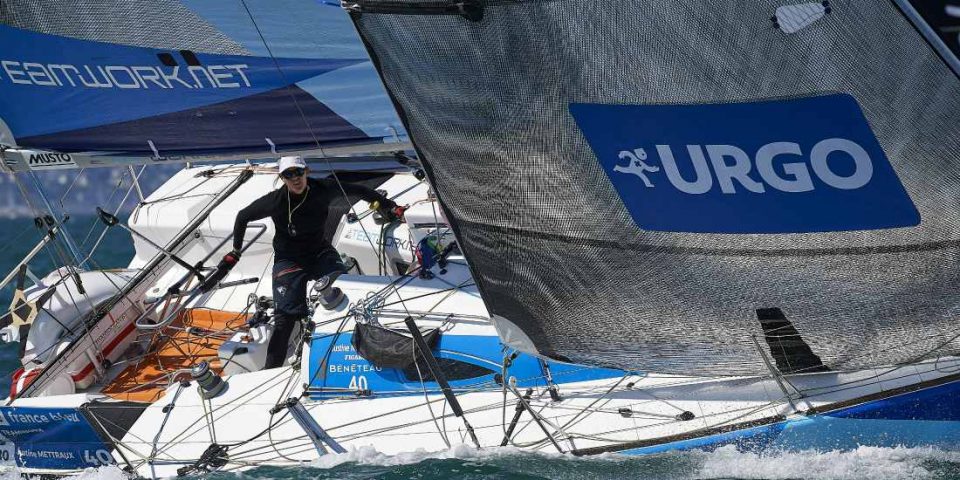 Justine Mettraux: “I really want to do The Ocean Race again”

After four seasons in the Figaro circuit, Justine Mettraux will only be competing in 2020 in the Transat AG2R La Mondiale, in order to hand over her Figaro 3 TeamWork to her fellow Swiss sailor, Nils Palmieri. Mettraux, now 33 years old, was discovered in France in the Mini 6.50 (2nd in the 2013 Mini-Transat). She tells us why she is moving on, talks about her projects, in particular The Ocean Race, and looks back at the start of her career on Lake Geneva.

You started sailing when you were  a teenager. Were you inspired by any particular sailors from Switzerland or elsewhere?
The person that most inspired me was Ellen MacArthur, whose book I read just after the Vendée Globe in which she finished second [behind Michel Desjoyeaux in 2000-2001]. After that, I started following Swiss sailors, in particular, Dominique Wavre and Bernard Stamm, when they sailed IMOCAs. They showed that it was possible to come from Switzerland and become a pro.

How do you explain that so many Swiss sailors have entered the world of ocean racing, considering the country is land-locked?
We have lots of lakes and not just Lake Geneva, so there are a lot of races and huge enthusiasm for sailing by people who have the means to do it on interesting boats. After that, I think that the Racing Training Centre (CER) in Geneva is a fantastic place and there are no real equivalents elsewhere. It has been there for 30 years and has trained an incredible number of sailors: Dominique Wavre was one of the founders, I went there as did my brothers and sisters, Valentin Gautier, Simon Koster… For youngsters who want to get into ocean racing, it is a great place to make the transition from dinghy sailing onto good boats that are not too expensive. Personally, it gave me the desire to continue down that track. I also got the taste for ocean racing during training camps organised in Brittany and in Hyères by a professional Swiss skipper, Jean-Paul Baechler. That was the real trigger at the age of 16, the fact that someone trusted me to sail a boat at sea.

You mentioned your brothers and sisters. What are they up to now? How do you explain the fact that you all went down the road of becoming professional racers?
Elodie, the eldest, has eased off a bit, as she had a baby girl last year, but she would like to continue; Bryan, who came after me joined Alinghi last year working full-time on the GC32 and TF35; my little sister Lauranne was taken on by Oman Sail for the women’s Diam project and Nelson is in charge of the Racing Training Centre. People think my father was a great racer, but he wasn’t. He is from the country and started to sail late in his life and we used to do some cruising around the lake with him. We all got the taste for that and signed up to the Training Centre.

You then sailed at sea in a Mini. How did that come about?
When I started back in 2012, I had been sailing for two years on a D35 with Dona (Bertarelli), and because I knew that the Ladycat was going to end with Spindrift taking over with a male crew, I told myself that it was the right time to try to get going in the Mini class. The Mini-Transat is fairly well known here, as there have always been two or three Swiss skippers in each edition. A close friend did it in 2011, and I followed his project and I also sailed from time to time with Etienne David, who did that race with TeamWork. I thought it was time for me to give it a go, so I wouldn’t have any regrets about missing out on the adventure. In the end, it all fell into place, as just at the point when I was looking for partners, TeamWork was looking for a new skipper. I met up with them and a week later, the project was up and running. The Mini is the perfect starting point without too much pressure and no need to look for tons of money. It is the perfect boat to learn the basic elements of solo sailing and to see whether you have the skills or not.

Clearly, you had the skills, as you finished second in the series boats in the Mini-Transat in 2013. How do you explain your success?
I think I had the means at my disposal with TeamWork to do the project on a brand new series boat with Etienne David accompanying me. The handover helped a lot. I was able to prepare myself seriously for two years and that too was important. Then, in that race we had some rather special conditions. I think less than half the fleet completed the race. In any case, it was a great way to start. By the finish, I knew had found what I was looking for, but I knew too that I wanted to do something else.

That was immediately the Team SCA project in the Volvo Ocean Race?
Yes. I applied telling myself that I couldn’t miss out on that opportunity, but to be honest, I didn’t think they would choose me. In the end, the selection process went well and I had the advantage of being under thirty, which was a key element and my result in the Mini-Transat made things easier.

What do you remember most from that experience?
At the time, it wasn’t easy. The Volvo is a long, hard race and is difficult for all the girls. Personally, I think that the project run by men for women could have been better organised. We had a great crew of skilful women in each role and they didn’t make the most of that, which is something I regret a bit. But, it is still a great memory and an exceptional experience in my life, which in the end was very important for all the girls, as it showed that they had every right to be sailing on these boats and were able to sign up for the next edition when the new rules meant there had to be women aboard the boat. That happened to me, as I was in the next campaign with Dongfeng replacing Marie (Riou) in two legs. I didn’t do the whole race, as I had just started my Figaro project.

Was Figaro racing the obvious next step?
Yes, I already wanted to do that before being selected by SCA. It was the right boat to continue to advance in solo sailing and as TeamWork were willing to work with me, I managed to get going in 2016.

In the following year, you finished 7th in the Solitaire, which was probably the height of your career…
Yes, that was fantastic. Even if in 2018, I was 11th, which was also a good result, in 2017, I felt that I was sailing on a cloud. It felt like everything I did worked out well. I found speed, went into the right places, didn’t make any major mistakes. I hadn’t imagined getting that result.

You discovered the new Figaro 3 last year. Has that changed a lot for you?
What has really changed is that as the boat accelerates and decelerates more quickly, you need to focus more on strategy than on speed. You had to find a different way of doing things from the Figaro 2, and be more aggressive. Those just arriving in the circuit probably did better than those like me who were used to focusing on speed without looking outside around the boat. But I think that this year, it will be a bit different. Everyone will be thinking of that.

You are handing over the helm of TeamWork to Nils Palmieri. Why?
In particular, it was because I wanted to do something different and I was in contact with people about a major project, which in the end is uncertain, so I organised the handover with Nils. It was the right year, as I felt like it used up a lot of my energy last year, so I wanted to ease off and not do the whole of the Figaro season. It is probably to be able to bounce back later with a real desire to do it, as I love the circuit and the Solitaire; even if you sail on other boats, you never find the excitement and demands that there are in this race. I think that it is important to come back now and then as other skippers have done.

Was the major project you mentioned The Ocean Race?
I can’t tell you anything for now, but what is certain is I really want to do The Ocean Race again; I have already taken part twice. Doing it again isn’t just for the sake of it. It needs to be a strong project, Imoca or Volvo 65. I also think to that it is the right time for me to look at doing the Vendée Globe. I had thought about it 2020, but I got things going too late, and as I don’t want to do things badly, I have focused on the Figaro to give myself the right  to be able to do it well.