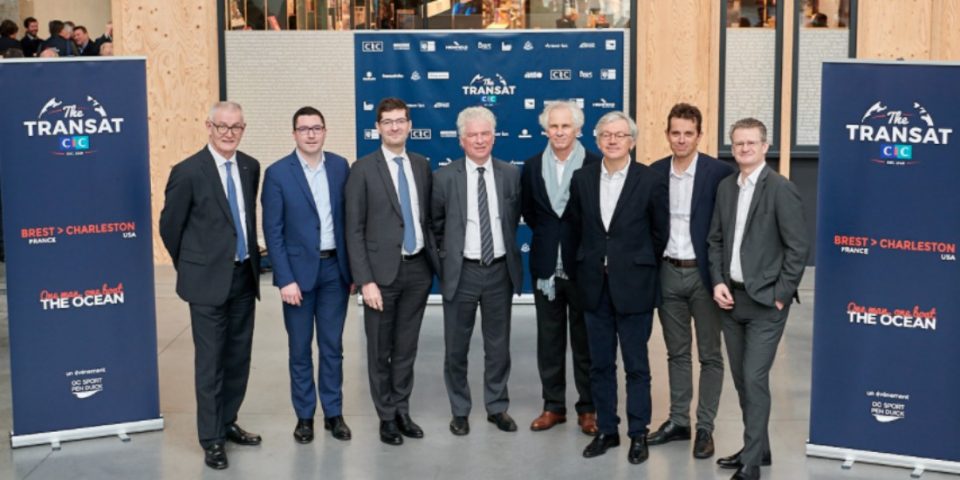 Hervé Favre: “For The Transat CIC, we’re looking at the possibility of an event in the summer”

Over the past fortnight, the Covid-19 pandemic has led many race organisers to modify their plans. Among them, OC Sport Pen Duick which postponed  (currently the situation) the Transat AG2R La Mondiale and is looking at various options for The Transat CIC, but remains confident about the Solitaire du Figaro. Tip & Shaft talked to the Managing Director, Hervé Favre.

Let’s start by talking about the Transat AG2R La Mondiale: what is the situation today for this race, which was due to start on 19th April?
We received the decision from the French sailing federation, which extended the ban on sailing events until 3rd May, so as far as the Federation calendar is concerned, the race is officially cancelled. That is not a surprise and we were expecting that decision when we announced ten days ago that the race would not be taking place on the date that was planned. We are currently in talks with the Figaro class to find a gap in the calendar to allow the race to take place. We tried to see if anything was possible this year, but that looks complicated. The weather opportunity for such a transatlantic race goes up until the end of June – but that is not really an option given the current situation – so it could be after 1st November, but it would then be up against the Vendée Globe. That is why we are looking ahead to 2021: we are working on the idea but with the calendar already in place, we are looking at how to adapt to that. That’s where we are at in our talks with the Figaro class.

In the spring of 2021, there is in fact the Sardinha Cup and the new Med Sea Race on the calendar…
Yes, indeed. For the event in the Mediterranean, that could work out: already in the past there have been times when the Transat AG2R and the Generali Solo follow on from each other, so that is potentially possible. Then, there is the Sardinha Cup, which had an ambitious programme for next year; we are waiting for the class to talk to its members about this matter before we discuss that with them.

What is the position about this question of date of the headline partner, AG2R La Mondiale?
AG2R La Mondiale is a major player in the health sector, so given the current situation, our contacts have told us that they cannot take a decision for the moment about a different date. They have accepted that the race will not start on 19th April, but obviously today this is not their main concern, which is understandable. Times are hard for all the different insurance companies, especially for AG2R La Mondiale, which has a large number of elderly people among its clients and they are directly affected by the coronavirus, so it would not be right for us to press them at this moment in time.

Let’s move on to The Transat CIC: has there been any progress since last week?
We have done a lot of work on the matter. We are busy in talks with the city of Brest, partners, in particular the CIC, and the classes. In principle, we have the support of the CIC and Brest to set up an event in the best possible conditions this summer or next year. But to organise a race, we need skippers and boats. So that is the main thrust of our discussions. We sent out a poll to our four main classes [Ultimes, Multi50, Imoca, Class40] to see what their preference was. I think that is the best way of moving forward. We can’t do it by ourselves and set up a race on such and such a date.

What is your deadline for organising a race this year?
At the moment, we would require around six weeks to prepare before launching an event and that cannot be shortened. But it doesn’t involve just us, there are also the technical departments in Brest, and we don’t know how long it will take them to get up and running again. Then, there are the service providers, for example, the builders of the village. They may have other work on and so may not be available… We have been telling ourselves too that the day the confinement ends, hopefully by the end of April, the authorities won’t necessarily be opening the doors wide open and allowing gatherings of more than 50,000 people. So at the moment, we are looking at the summer, but we don’t know when it will settle down, so it is hard to give a precise answer. All of the elements we need to consider to come to a decision keep changing from one day to the next. Gradually, we are starting to realise that even events scheduled for June or July have had to be postponed – such as the Olympics for example, which had to be postponed this week, whereas initially they had given themselves four weeks before deciding and Wimbledon is now in doubt too.

What course scenarios are you working on? A Brest-Brest loop in the Atlantic?
Yes, we are rather moving towards courses with islands or a virtual way-point to pass, knowing that we had promised to the classes that the finishes would not be spread over two or three weeks. This means that we would do different courses according to the different classes.

Is the idea of merging The Transat CIC and the Transat New York-Vendée-Les Sables d’Olonne (only for the Imoca class) a possibility?
This is something that has indeed been mooted. Today, we are not excluding it, we even consider that the best solution would be to have one big event rather than two races. But Imoca tells us that it would be a very complicated solution to implement.

The Multi50s, who were not due to participate in The Transat CIC, could finally join in?
Yes, we asked them if they were interested, but it remains complicated, especially for new skippers who do not want to race alone to start of with. And we don’t want to change the concept of The Transat CIC, the race will remain solo. But everything can still evolve: imagine that the Transat Quebec Saint-Malo does not take place – which I do not wish, of course -, some may say that it is still better to do a solo race, going perhaps a bit less hard than the original The Transat CIC. So everything is still open.

Until when do you give yourself to communicate?
We had announced that we wanted to make a decision at the end of March, I hope that we can stick to it. But as I said, the elements are so up in the air that if we feel that we will not have absolutely certain answers next week, we will take a little more time.

Is a postponement of The Transat CIC to 2021 also a possibility?
Yes, we are also working on this possible scenario. But, again, the case is complex, because the timetables for next year are already pretty much set. So if we were to postpone a year but end up with fewer boats, we won’t have anything much there.

Finally, let’s talk about the Solitaire du Figaro: is the course resolved now?
Yes, it is, we announced it to the Figaro class office. But I cannot reveal it to you, we will communicate it next week. This is certainly the good news in these difficult times, because everyone obviously wants to sail, since there have been no events since the start of the season. It’s really important for the Figaro class to be able to offer a great event, it’s good to consider running a good race these days!

The format is the one that people have been talking of: three classic stages and one sprint?
You will soon find out if this is still the case.

You are looking for a main partner for La Solitaire, will the economic crisis that is coming make this quest even more complicated?
Today, the health crisis is obviously the things that concerns us all the most, the number of people affected and who are dying is terrible. And we are sure we will suffer an economic crisis that we can hardly imagine. If we look at the previous crises we know that in these moments, the first budgets that suffer are marketing and advertising. And that it then takes time to restart, one or two years minimum. So our whole ecosystem will be impacted, especially as our business model, for both organizers and racers, is largely based on private sponsorship. So yes, it will make our task all the more difficult, we must be aware of this. After that, there are always areas that work well, it’s up to us to be smart and find them.