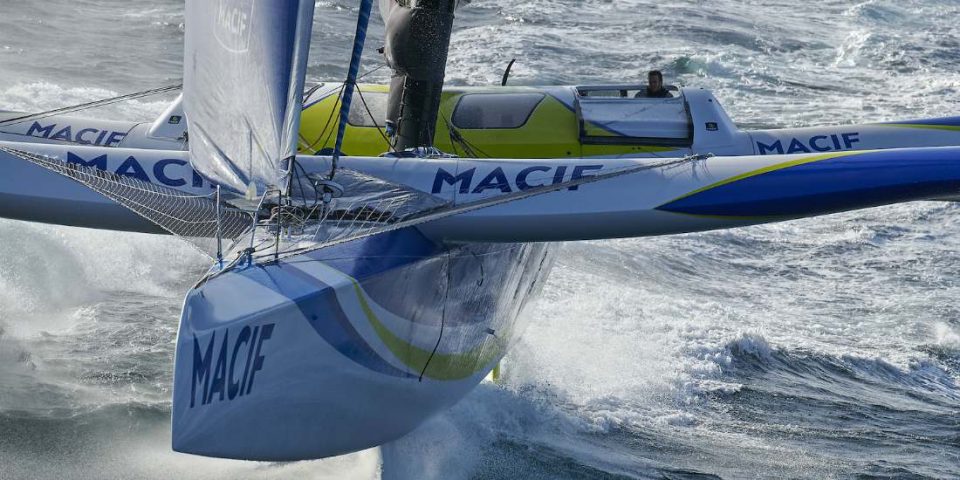 With the Covid-19 pandemic affecting the whole planet, it has meant a great deal of uncertainty for sport in general and sailboat races are no exception. What will the impact be on our sport? What changes will there be to the economic model? How do races need to change? How will sponsors behave?

To try to get to grips with this new situation, Tip & Shaft is carrying out a series of five interviews about the future of sail racing. Second to respond is François Gabart, skipper of the trimaran Macif which he decided to step back this year from and leave the helm to Pascal Bidégorry -, but also the founder and boss of MerConcept, the company which addition to the Ultim project manages  hose of the Imoca Apivia of Charlie Dalin and the Figaro Skipper Macif programme. And MerConcept are in charge of building the Imoca 11th Hour Racing for the next The Ocean Race.

How have you been organized at MerConcept since lockdown on March 17 and what is the program from next Tuesday, the so called day of deconfinement?
The  trimaran Macif, which had been launched on March 12, just before confinement, remained at the dock in Port-la-Forêt and will get back under way when the rules allow it, so pretty soon, depending. Right now, today we do not know exactly what we will do in terms of the programme. What is certain is that we will do everything to continue to optimise and progress the boat and to feed ideas into the future trimaran . We will also try to carry out PR operations to take members and guests of Macif sailing and also nursing and medical staff who have helped so much in this crisis. The Imoca Apivia will go back in the water next week with the objective of preparing it for the Vendée Globe. As for the build of the new Macif trimaran and the new Imoca, part of MerConcept, the design office has continued to operate by teleworking since March 17. Building stopped initially and then gradually resumed.

On Tuesday you participated in the videoconference meeting which was organized by the FFVoile to propose measures to resume sailing to the Ministry of Sports. Was it necessary for the ocean racing to be one united body to challenge the public authorities?
Yes, it was important to collaborate together, because so many things are happening in this very uncertain period, that it is by working together that we will be able to get out of all of this in the best shape possible. So it’s good that everyone can present their good ideas. We can’t afford to hold them back in our own corner today, they have share ideas to find solutions fast so we can revive and repeat races that remain the backbone of our ecosystem. I think that this ecosystem has a very strong capacity to prove resilient. But in the days, months and years to come, we will have to be smart, that we try to react intelligently, and we help each other so that we adapt and we transform. There are lots of projects to set up so we can deal with the ‘storm’ that we are experiencing.

“If the Vendée Globe enables some people to have a better winter, it has to go ahead”

Is it important in the crisis we are currently going through that the Solitaire du Figaro and Vendée Globe, which were given priority at this meeting, take place by the end of the year?
It’s very hard to answer that, as if you step back a bit, there are bound to be things that are more important, such as people’s health. When I say health I mean it is linked to the virus that is killing people. It’s horrible, but there are also some indirect effects, as it affects those people who are unable to be given the treatment they need. If we look more widely at the question of health and well-being, there are also all those people who are going to find themselves without work. So given that context, is it important to have the Solitaire or Vendée Globe? I would like to say yes, if they can offer something to society. If the Vendée Globe enables people to have a better winter, yes, they should go ahead. That doesn’t mean that you can do just anything you feel like. You cannot organise the start if the health regulations cannot be respected, of course. But you also have to take into account the reasons why we do this job: we do it too to offer some fresh air, freedom and make a lot of people dream, as they indirectly go through what we are experiencing. I don’t know what the health or economic situation will be in France next winter, but I think we need to say that these races have their part to play. I’m not saying that they go ahead without fail, but that needs to be considered when weighing everything up, which is the very complicated process we are now facing.

A Vendée Globe without the general public is one possibility, but would it then really be the Vendée Globe?
Have all the Vendée Globes looked the same since the race first started? Probably not. There are similarities but there have been changes too. Should a race always be like the previous one? Probably not. Quite the reverse in fact. Every event needs to progress over time. The 2020 Vendée Globe, if it takes place, is bound to be different from previous editions, but I don’t think that is a problem. Obviously the popular support for the event is extremely important. It is one of the defining characteristics of this race, but it is not the only one. Today, ocean racing is one of the only sports which can take place while fully respecting the health regulations. So, if all the elements do not come together, should we lose out by abandoning what can be done? That is a big question, which today nobody can answer, as we don’t have all the info. What makes it tough is that we don’t know. We have to show some patience.

“As someone involved in ocean racing, we can offer dreams. That is one of our social roles”

Let’s look a bit further ahead: do you think as Mark Turner said last week, that this crisis is an opportunity to examine what the real meaning is to what we do and how we can contribute to helping society advance?
Yes, of course. For me, the questions of meaning, interest, our role, have been going through my mind for years, and today given what is happening, we need to ask ourselves those questions. Personally, I think that ocean racing has a real role to play in our society. Just like we need artists, we need sportsmen. They are all part of our culture and our society. I mentioned before the matter of offering dreams, that is one of the social roles we can still fulfil. However, it is not because we help some people dream that we can do just anything. Today, we have an environmental impact which counts for example. What we do has to bring us at least as much as that or more, indeed much more than what that all costs. Another role for ocean racing is to do with technical progress: everything that is developed for ocean racing has to be of use to other sectors, such as boating and shipping. The emulation that comes from racing can lead to some extremely interesting ideas and have much more meaning than simply winning a race. In particular, I am convinced that in the coming years, we will use wind power more and more frequently in shipping, just as the ideas about flying and foils are extremely interesting, as they can reduce the amount of energy we need to move around. I would like Mer Concept to be able to contribute in a better way to all that.

Do you think the current situation can help accelerate that movement?
Yes, this period encourages people to think about things and make changes. I think that such a situation brings out the best and worst in us. I believe it brings out the best, as I always want to be optimistic. I think there will be some magnificent things to come out of all this. There is a real desire to change certain ways in which we live and it has accelerated that. We can see that for example with the La Vague group, which benefited indirectly from the lockdown. Ocean racing is a world that is ready and willing to move ahead. Sometimes people reproach us with being a small elite group, even geographically, but this is a huge opportunity to get things moving. It’s easier to do when people are close to each other and know each other well. In fact, we have no choice but to change: in the short to medium term, we cannot have racing in front of people or only  a few, so we are going to have to find a new concept for the villages. Alongside that, the economic situation is going to be tricky in the coming months and years, so we are going to have to come up with new economic models for our lives… It’s horrible to say that, but we know that some sponsors will pull out, some sailors will be unemployed, but this crisis will also create opportunities, because to get projects up and running again in the coming years, we will have no other choice but to things differently, while continuing to apply our strengths. Our projects rely on the human aspect with a big H, and ocean racing has some very strong values.

“Up to us to change some of the rules: it is by imposing constraints that we are able to create”

Mark Turner spoke about putting the social aspects at the heart of our projects. Is that the direction we need to go in in your opinion?
Yes, of course. Along with Macif, since practically the start of the project, this need to give a meaning to our project has always been important, because they are involved in the social economy and support others. Of course, sponsorships have to reflect that commitment and it has to be projected by what the public sees.

There are a lot of other projects like this. How can you go from clever words to real deeds in ocean racing?
There are many ways of going about that. One of the solutions may be to reinvent the rules of the game. It is not that easy, but it may be easier in ocean racing than in other sports, because those rules are something we sailors come up with and write down. So it is down to us to change some of the rules and impose constraints. After that, we shouldn’t expect everyone to approve a change to the rules before acting.

To finish, do you think that sailing is one of the sports that can come off best after this crisis because of the values it conveys?
I am totally convinced of that. That does not mean it is not going to be complicated in the near future, but we have found all the ingredients to come up with something fantastic. We have the ability to invent the ocean racing of tomorrow to ensure that the sport overcomes these problems very quickly and can adopt a role to help build the society of tomorrow. Having said that, it is going to be hard. We are going to have to make sacrifices, pull together and work hard.