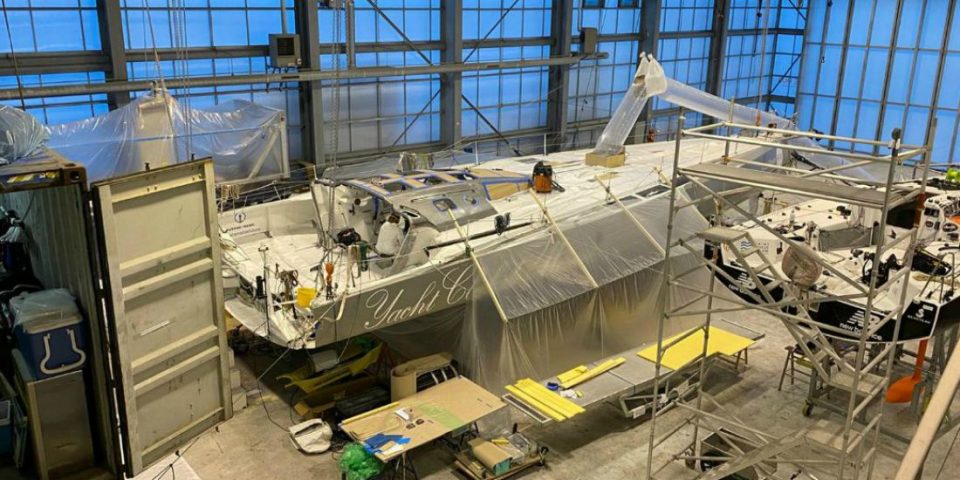 Imoca: The boatyards are ringing in the changes for the Vendée Globe

Ten months before the start of the Vendée Globe and a very intense build up season which will open with The Transat CIC (starts May 10) and rolls straight into the New York-Vendée (June 16), almost all of the IMOCAs are fully engaged in their winter refits. For some the job list is more comprehensive and may include new foils, for others constrained by budgets it is more about maximising reliability and small incremental performance gains.

A few teams have decided to fit new foils for the Vendée Globe. Charal, as announced several months ago by skipper Jérémie Beyou are fitting a new set of Vendée Globe specific foils so therefore more orientated to downwind VMG. They are designed, like the first set, by VPLP using new tools which come from the modelling package developed by Emirates Team New Zealand and now available on the open market. Nicolas Andrieu, in charge of performance at the Charal Sailing Team, says: “This tool has been very useful and we are fairly confident that this new design methodology can bring us a step up in performance“.

At Arkéa Paprec where two foils failed in the fall – the first just before the Jacques Vabre and the second during the race, the construction of a new pair foils to Juan Kouyoumdjian plans starts at Lorima “from here in fifteen days“, according to Vincent Riou who oversees Sébastien Simon‘s project. “We had planned to make a V2 pair for the summer, so what has obviously changed is the timing. We are running up a race against the clock because these are parts that take a long time to produce, and the planned program is to do the two Transats”. Do we know the reasons for the breakage of the first two? “It is still under review we are awaiting confirmation of what we think before we start definitive construction”, replies Riou the former skipper of PRB.

A new pair of foils for Thomas Ruyant‘s Advens for Cybersecurity is being built at Persico to a design by Verdier studio under the direction of Antoine Koch from Thomas Ruyant Racing. “It was planned and budgeted.”  Ruyant told Tip & Shaft. “Both for the question of the project’s viability in the event of breakage and for performance. Our first pair is great, but we will try to have more foils for solo racing and for the Vendée”.

Alex Thomson Racing team told us that it was going to “build another set of foils before the Vendée Globe” for Hugo Boss and the same is true for Nicolas Troussel on the new Corum, expected to launch in early March. Meantime Armel Tripon will put L’Occitane in water on February 1st “with a pair of foils to start, then potentially a second before the Vendée Globe“. Kojiro Shiraishi (DMG Mori) has not planned to build new foils ‘at the moment’. Charlie Dalin is keeping tight lipped….. he did not want to communicate anything formally before Apivia comes back out the shed. But it is hard to see the skipper from Le Havre, given his goals on the Vendée Globe, taking the risk of trying to do without a second set. He will want to be at least on terms with his competitors.

Among the boats from previous generations, two skippers have also chosen to have new foils built: the first is Boris Herrmann which replaces the current appendages of Malizia II-Yacht Club de Monaco with new ones, currently built at Multiplast from the moulds used for MACSF (another pair of foils will be produced later for The Ocean Race). “This is a compromise that seemed intelligent and not too risky for a Vendée not too extreme but more efficient,” explains the German who works with Quentin Lucet at VPLP. Boris is not just updating the foils: “We also alter the bow to make a mini-scow, the objective being that it pushes less water and that it helps to lift the boat”. These major changes started in December at Le Hub by OC Sport’s facility in Lorient. These changes are made possible thanks to the arrival of a new partner to be announced at the end of January or at the latest in February”.

Last boat to be equipped with foils this winter is Time for Oceans. Skipper Stéphane Le Diraison explains: “In early 2019, I started with the idea of ​​making more slender straight daggerboards, like Damien (Seguin), we realized that the operation was expensive. We started thinking about foils. We then had the opportunity to buy some from Initiatives Coeur with their wells, we grabbed it. We work with Finot-Conq, I also hired Philippe Legros, who had worked with Jérémie Beyou on the fitting these foils to Maître CoQ 2016 [now Initiatives Coeur]. ”

Many other modifications are underway on the Finot 2007 plan: “We are updating the ballasts, we make new rudders which are much more modern and deeper, and we completely redo the roof. The double steps downs from the cockpit is too wide and no longer suitable. For the roof and rudders we shared the tools with Damien Seguin [who therefore makes the same modifications on Apicil, editor’s note]. ” All these works have a cost, which the skipper figures at 500,000 euros (extra VAT), supported by some of his partners.

Other skippers mentioned to Tip & Shaft that they had thought about the possibility of adding foils to their IMOCAs, but they would rather with until after the Vendée Globe. That is the case for Fabrice Amedeo, who for a short time now has been working with the Gitana Team: “We got in contact with them, because we were looking for a shed. They weren’t interested in just providing a home for the boat, but were keen however to work with us, allowing their teams to accompany us. I found that an interesting idea, as I was already thinking about the 2024 Vendée Globe. The idea is to develop the boat and fit her foils, when she gets back from this Vendée.”

As for Louis Burton and BE Racing, they are not planning on carrying out any major work this winter, but will come to a decision in the first quarter about what to do after the solo round the world race, as the skipper of Bureau Vallée confirmed: “We’re looking at lots of ideas, such as keeping the boat, building a new one, buying one from the 2020 generation. If we keep this one, we’ll wait and see whether the class allows horizontal foils on the rudders. If that happens, we could design foils that work with them and we’d be ready for 2022.”

Manu Cousin is thinking along the same lines for Groupe Sétin: “We thought about fitting foils, but I think that will be on our next boat, as I am still fairly new to the IMOCA class. My sponsor and I prefer to set off with a boat that we know well to move up to another boat next time, which performs better and is equipped with foils.”

As for the other refits going on with ten months to go to the start, most teams are working on two aspects: ensuring reliability and ease of handling. It was the question of reliability that motivated the Initiatives Cœur team to fit a new mast on Sam Davies’s IMOCA: “The current mast has already done two Vendée races, and even if the masts are given a complete check-up using ultrasound every year, we are still never really sure about how composite materials suffer fatigue,” explained the team-manager David Sineau.

As for ease of handling, some skippers are focusing on stacking, such as Arnaud Boissières, who has fitted “a sort of sliding system aft to make stacking easier” on La Mie Câline-Artisans Artipole. Maxime Sorel has planned to improve the layout inside V&B Mayenne: “There is a very large nav desk with a double seat and that takes up a lot of room, so we’re looking at that,” the skipper from Saint Malo told us.

Lots of teams have worked hard on protecting the skipper, with a protective cover installed on 4myplanet (Alexia Barrier), a fixed protection on Initiatives Cœur, while several cockpits will be completely closed up with composite materials and/or cloth by the spring. That is the case in particular for Newrest Art & Fenêtres, Malizia and Bureau Vallée.