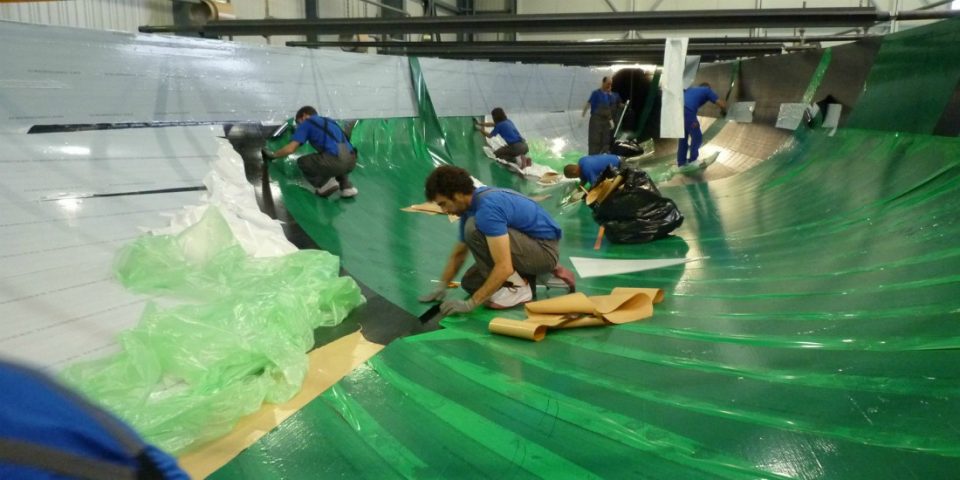 “We are in the starting blocks”, says Yann Penfornis in his large corner office which is blessed with breathtaking views over a quiet and sunny Gulf of Morbihan today. The general manager of Multiplast, is direct and to the point, as usual. The boat building facility in Vannes a subsidiary of the Carboman Group wants to build an Imoca for the upcoming edition of The Ocean Race. “We have a” build slot “available in our 2020 work schedule… even if another Imoca order came our way in the next few days”, he smiles with a glance at his phone.

For Multiplast founded by Gilles Ollier in 1981, this crewed world tour is an important event. “There is a lot of emotion and passion attached to the race admits the naval architect who has been with the company since 1989 as we are involved in the last three victories on the Volvo Ocean Race.” Groupama IV, the Volvo 70 to the design of Juan Kouyoumdjian was the winner of the 2011-2012 edition with Franck Cammas, was built just by these waters of Vannes. And Multiplast was part of the build consortium, formed with Green Marine and Persico, that produced the eight Volvo 65 for the next race, so including Abu Dhabi Racing and Dongfeng Race Team, respective winners in 2014-2015 and 2017-2018.

But an order for The Ocean Race is much more than sentiment. It is about economic and technological challenges much more so. “Building an Imoca for The Ocean Race is even more interesting technically”, explains Samuel Napoléoni, Project Manager at Multiplast, “The race is crewed with stops and the sailors will no doubt push the boats harder than what is typical on the Vendée Globe.” And international reputation is important: “When we arrived with Groupama IV, the Kiwis were not really rating us”, recalls Yann Penfornis, “It was a little less so after.”

At two years before the start of The Ocean Race, few Imocas are under construction, even if the Anglo-Saxon teams of 11th Hour Racing and Switchback are working hard at it. There will only be a few opportunities so Yann Penfornis wants to make sure they have the best chance possible: “We know that the Spanish want to build a new boat with Juan Kouyoumdjian, so we have already have the mould of Arkea-Paprec and would be ready to go… ”

The use of an existing mould, of course, saves build time, which can be reduced to “about 9 months“, according to Yann Penfornis. The other option is to make a new mold. “then you must add in time for design and computation studies and the construction of the tooling”, says Samuel Napoléoni, ” So add to the nine months of manufacture of the hull and deck and rig.”

This is where the group effect plays out: Decision SA, the Swiss yard which is in the same family as the Vannes facility, has a new autoclave and can build structural elements and bulkheads. SMM, bought last year with Vincent Marsaudon has a digital milling machine 46 metres long which can speed up the mould construction process. “And we are also well known for having very good ‘cooking’ facilities with ovens of 32 and 45 metres long”, recalls Yann Penfornis

As we visit the site, we pass over the central hull of the next Ultim Macif and the floats of Banque Populaire and the assembly stations for the new TF 35 – successor to the D35. But there are advanced parts for Thalès and Safran, an auto simulator for Renault, fuselages for the electric plane Eviation. And the past few months have seen Multiplast turn out the Britannia hull and deck moulds, for Ineos Team UK AC 75 (the second boat deck mould is underway), the Imoca DMG Mori and MACSF foils.

“Sail racing is about 65% of our 13 million euros turnover”, says Yann Penfornis. “This winter, we will update the 11th Hour Racing foil wells and modernize Time for Oceans by Stéphane Le Diraison, who modifies his cockpit and installs foils. Michel Desjoyeaux has entrusted us with the construction of the foils of Corum and we have another pair of anonymous foils on order. ” Yes it is a healthy order book. But there is still room for an Imoca for The Ocean Race.