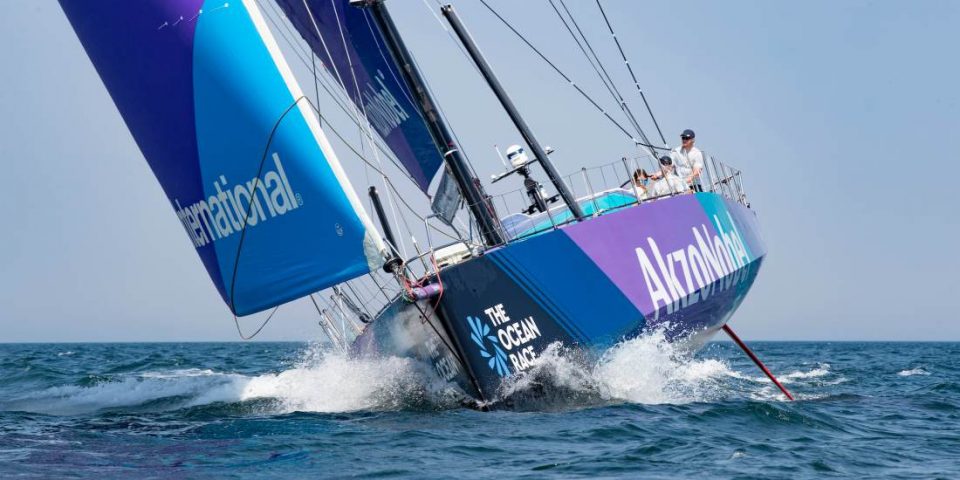 With the Covid-19 pandemic affecting the whole planet, it has meant a great deal of uncertainty for sport in general and sailboat races are no exception. What will the impact be on our sport? What changes will there be to the economic model? How do races need to change? How will sponsors behave? To try to get to grips with the new situation, Tip & Shaft is carrying out a series of five interviews about the future of sail racing. Our third guest, Nathalie Quéré is an expert in sponsorships, who worked for Infonet and BT, where she developed partnerships with Alinghi (America’s Cup in 2001-2003) and OC Sport (Vendée Globe 2008-2009 alongside Sébastien Josse). Until last year she was head of the AkzoNobel brand – whose campaign she led in the last Volvo Ocean Race. Today, she works as a consultant and managing director of W Ocean Racing, a management company involved in sailing which she co-founded with the Australian skipper, Chris Nicholson.

Let’s start by talking about your news. Can you tell us about your projects with W Ocean Racing?
We’re currently working on a campaign for the next edition of The Ocean Race. We are looking for partners and have had lots of business meetings over the past year. These talks are well advanced, but came to a standstill more or less because of the virus. We hope and for the moment we believe it can happen, that the race will take place next year. Of course, we are keeping a close eye at what is happening with the Vendée Globe, because even if I have seen that things look like being confirmed, the two races are linked. We are still running the AkzoNobel’s VO65, because AkzoNobel decided to continue to make the most of their commitment in the last Volvo Ocean via tours that we organised in 2019 and 2020 with clients. Now within the campaign we are running for The Ocean Race, we have not ruled out taking part with a 60-foot Imoca and we are also looking at the Vendée Globe. I know that Chris really wants to do it (see our interview from October 2018), so we are looking at the possibility of a programme which allows us to do both.

What impact has the crisis around the Covid 19 pandemic had on your project?
Everything came to a halt in April. The companies we were in talks with told us that for the moment, they could not say anything more for the time being. But that was not necessarily a definitive refusal and we agreed to get back in contact once out the other side. At the same time, we are aware that we have lost a lot of time; I think we have lost six months in terms of commercial work, because there are bound to be questions about budgets which were either planned or being talked about. We had hoped to complete our funding by the end of the year but now we are really looking at the end of the second quarter of 2021.

How are things going with AkzoNobel, with whom you still work? Are you aiming to launch another campaign?Today, we are not really looking at talks around a partnership. That should happen at some point and I hope there will be talks, remembering that what is going on at the moment may change everyone’s priorities. So for the moment, there is nothing certain.

What do you think the consequences of the current crisis will be on sports sponsorships?
I can see a short and medium term impact. Communication budgets, sponsorships and marketing were among the first areas to be affected; so I imagine that the budgets for 2020 which have already been signed off may lead some firms to postpone their projects, or cut them back to be in survival mode, but that will be for a relatively short period. Another aspect will have an impact in a year or two. It is the fact that we are in the middle of the year, a period which many firms is when they start to think about the following year, when budgets start to be proposed and signed off. This timing is critical, as taking into account the crisis, it is very hard for firms today to look ahead to measures for 2021 or even 2022, which would normally be decided in the next six months.

So the current situation could be a deciding factor for many projects…
Such a moment – and that often happens with sailing projects, when something serious happens – is a real test of the strength of the partnership. There are bound to be firms who will want to reduce their budgets, but what I can see around me is that most firms involved in sporting sponsorships are sticking with them. Sometimes they have to adapt, but there is clear loyalty here. Even if 2020 is not going to be brilliant in terms of major communication campaigns, we have examples of companies, which in spite of their own difficulties, are going to continue to support the projects they have signed up for. There is a “good times – bad times” impact, which tells us a lot and is very positive.

Do you think that this may even strengthen their commitment?
Yes, I think that what is happening now will have a real impact in the sense that it will result in a rebuilding process: firms are going to have to rebuild confidence and their business. I love everything to do with brands in general and it is interesting to see that some brands have completely changed their strategy, like LVMH for example, who have got involved to show their best side. On the contrary, some have seen their support dwindle. I won’t mention any names. That shows that in times like these, there is something of a paradox: on the one hand, there is the need to cut budgets and that means cutting spending on communication and sponsorships and on the other hand, there is a real need to invest in the brand. It’s a bit of a tightrope. Not everything can stop and firms are going to be forced to deal with the questions thrown up by the crisis concerning our planet’s needs. Particularly as this social aspect is something their clients are looking for, as well as their staff.

“The idea of a virtual stadium, which has always existed in sailing, takes on a whole new meaning today”

What does sailing have to offer in this context?
Sailing can offer a lot. When you look at the economic models in sport in general, they rely on three features: TV rights, the commercial aspect – with sponsorship and advertising – and the sales element, in other words ticketing, hospitality, etc… Sports which rely on TV rights and ticket sales, such as football, are today in a tricky position. Sailing for which sponsorships are the main feature, may also be affected if budgets are cut. But it is a sport where there has always been the idea of a virtual stadium, particularly for offshore racing, as by its very nature, we don’t get to see the sailors. This idea of a virtual stadium takes on a whole new meaning today. We have seen that the figures for online media have grown exponentially in the past few months with a trend that is set to become the new norm with increased working from home and reductions in travel. All of these things mean people will want to escape, experience adventures and dream. More than ever people are going to need content that makes them dream and take them to places they cannot go to and sailing is perfect for that.

Does that mean that for a race like the Vendée Globe, they could cope this year with just the virtual element and leave the crowds to one side?
I don’t want to enter that debate, but I do know having experienced the start of a Vendée Globe with BT, there is nothing like the magic you find in the Village. It is an experience that nothing can replace. But having been involved in a campaign in the last Volvo Ocean Race, during which we really stressed the content created by the teams at sea in incredible conditions, I understand that there is real value in that and a solid return on investment for the firms, which some races may not be making the most of.

Do you see sailing having other advantages for sailing which will help it get through this crisis?
Yes, another advantage is the experiential side offered by sailing. When you are a spectator on the water at the start of a race or when you are invited aboard a race boat, you experience some very memorable, very special often unique moments, and when your brand is associated with that moment, there is a real transposition from one to the other. In the context where, over the next two to three years, there will be far fewer events, conferences and so on, all these big mass events that bring together a lot of people, people will be required to or may prefer to meet within smaller, more exclusive groups to enjoy these strong experiences. Sailing has a real card to play in its favour, because it’s one of the sports where you can offer this experiential side.

What of the actual values ​​conveyed by sailing in this particular period?
They are more relevant than ever. In a context where we are seeing the return of people, humans, in all conversations, including professional ones, sailing’s values ​​constitute a real opportunity to help companies rebuild themselves around positive messages. Among many companies there is a tendency today to rework their positioning to embrace caring human values and real authenticity even if these values are nearly always joined to business objectives. A sailing project can help them amplify this message, especially since sailing has real legitimacy in the contexts of the environmental aspect or the impact we have on our planet, say, much more than Formula 1 or motor sport. Another point: sailing remains a financially accessible sport, which will also count in the years to come. One of the companies we were in discussion with was almost surprised at the (small) size investment required in relation to the returns that we could offer.

Today, many sailing and racing projects are associated with an environmental cause, is there not a risk of trivialising the topic?
I have two answers on this: on the one hand, as I have just said, I find that sailing has real legitimacy in terms of sustainability, but I actually think that it is so legitimate that it will become almost secondary and render itself self-limiting. Sailing is a communication platform that can allow people to talk about other things. There are many other causes in broader society in which sailing can play a role, it can be related to diversity for example.

Finally, to hear you, sailing, despite this crisis it will go through, has reason to be optimistic?
Yes, I’m more of an optimist, I don’t think that everything will stop and that tomorrow everything will be very dark. But I think there is a lot of work, I am not saying that it will not be easy, but I am optimistic.